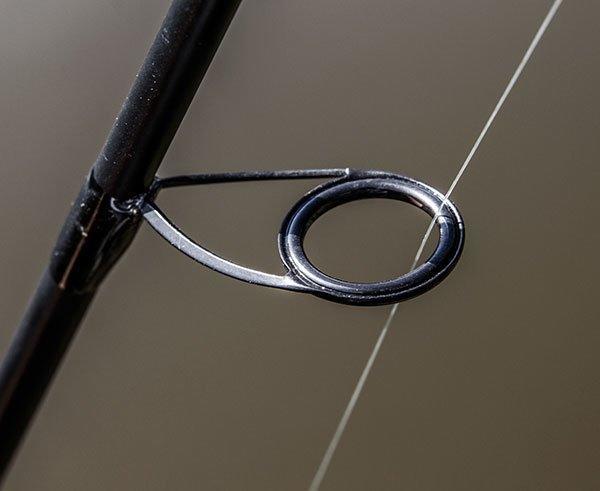 I’ve been putting my Dobyns Savvy Spinning Rod through the wringer lately. I’ve fun fished with it, used it in tournaments and banged it around in an old johnboat. Heck, my girlfriend even caught a 5-pounder on it this past weekend. Plainly stated, this is an incredible rod that I’m extremely pleased with.

My fishing rods are just like a mechanic’s toolsâ€”they get used and abused. Whether I’m jamming them in the front seat of my truck to hop in the boat with a friend or cramming them into a crowded rod locker, I need durable gear. It’s just my style.

The Dobyns Savvy Spinning Rod is built like a tank. I’ve been using the 7-foot, medium-light model and you can flat-out wrench on big ones with it. There’s no popping or cracking noises during casts or hooksets, either.

I’ve been really impressed by the durability of the stainless steel framed Kigan guides with Alconite inserts. If you fish enough, you’re going to accidentally step on some rods on your front deck. I actually stepped with my full weight on the sixth guide of my Savvy this weekend and it barely bended. I almost had a heart attack, but I checked everything over very well and it was all totally intact.

Before I decide on whether I like a rod or not, I take it for a spin in the johnboat. The awkward casting angles, the sharp edges and the limited space can be a nightmare for rods. The Savvy held up excellently and held up to the banging, carrying and constant hooksets.

Fishing with a poorly balanced rod isn’t fun. It can make even the simplest task, such as skipping a shaky head, awkward and you’ll be worn out at the end of the day. If you’ve been fishing with an unbalanced rod, I think you’d be blown away by the Savvy.

I have a Lew’s Team Gold Carbon Spinning Reel paired with my Dobyns Savvy and it’s one of the most well-balanced combos in my arsenal. You can balance it perfectly on one finger just above the handle.

I’ve enjoyed the excellent balance especially when fishing soft jerkbaits. Twitching your rod tip for an entire weekend can get tiring, but I felt great after using the Savvy for over 20 hours this past weekend.

A well-balanced rod also helps with casting accuracy, especially for novice anglers. I took my girlfriend on the boat this weekend and she can catch ’em, but we’re still working on that whole “casting” thing. To my surprise, her accuracy tripled when I let her test drive the Dobyns Savvy. She said it felt much more natural and balanced. I can’t say I disagree.

You can get away with a dull rod for soft jerkbait fishing, but a spinning rod’s sensitivity really comes into play when using bottom contact techniques such as shaky heads or drop shots. I spent some time pitching docks with the Savvy and again, I was very impressed.

The Savvy’s Fuji Reel Seat promotes outstanding sensitivity transfer. I was able to feel every small bottom composition change, which gave me a great idea of what my shaky head was doing at all times. When a fish bites, you’ll feel it with every part of your body that is touching the rod.

Some spinning rods just don’t cast well and those are the rods I refuse to use. I was very impressed by the castability of the Dobyns Savvy, however. It loads very well on the back cast, resulting in surprisingly long casts, even with weightless soft plastics. Even the girlfriend was bombing a Rapala Shad Rap directly into a 12 mile per hour wind with it this weekend! 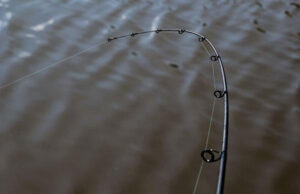 I’ve caught some good ones so far with the Savvy and I haven’t felt out of control yet. I’m using a fairly light-action Savvy, but 5-pounders haven’t been a challenge with it. It has a lot of backbone, but enough tip to promote solid hooksets. Too stiff of a tip can cause line failure on light line, but the Savvy absorbs the shock of the initial hookset very well.

If you like to throw shaky heads, drop shots and weightless soft plastics, I definitely suggest taking a look at the Dobyns Savvy Spinning Rod. I really like mine and Dobyns makes great rods for finesse applications. They’re priced starting at $159.99, which is a fairly reasonable price when you consider the performance and feel of the rod.

The Dobyns Savvy Spinning Rod is available at TackleWarehouse.com.