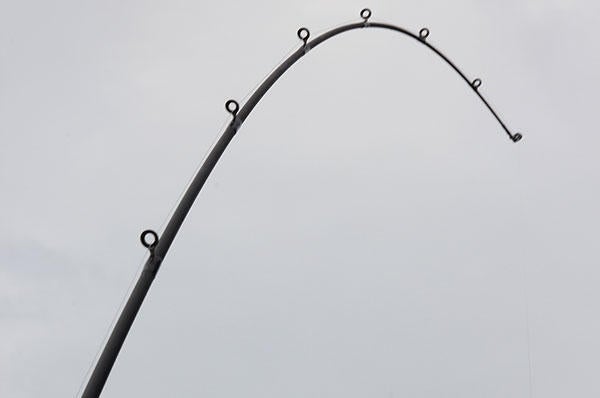 When manufacturers listen to anglers who are accomplished at a specific technique or fishing situation, it draws consumers to the product. After all, we don’t want the guy who invented the fun noodle designing our bass fishing rods. So when I heard through my sources early last year that Denali was making an offshore rod with Terry Bolton, I was pretty pumped. I fish away from the bank a lot and the thought of a rod built specifically for throwing big jigs and worms at schools of bass in deep water appealed to my nature as an angler.

The Denali Signature Series Terry Bolton rod came to the Wired2fish offices about 4 months ago, so I’ve spent a good bit of time with it before sitting down to go over my thoughts on it. In that time, I’ve had a lot of opportunity to fish a wide range of lures, lines and techniques with the rod and have come to love the rod. So much that I’m planning to add a few more to my rod collection.

The rod measures 7 feet, 2 inches with a heavy power build. But I thought the rod fished more like a strong medium-heavy power rod with more rear to it. That’s exactly what you need when you’re throwing contact baits like worms and jigs on extremely long casts in water deeper than 10 feet. You have to have good sensitivity to feel when a fish bites but you also need to be able to drive a hook from distance.

Many have power rods also incorporate extremely fast actions. So what you end up with is a broom stick of a rod. It can make casting worms and playing fish a little difficult as well. What’s nice about the Terry Bolton Signature rod is that it has a perfect tip action to it. It bends about 30 percent before the backbone really kicks in. But that tip action lets the rod load nicely for long casts. It’s extremely sensitive and I had no problem playing and swinging bass, some to 5-pounds, although I don’t recommend that too often.

The rod is made with a custom BTSI graphite blank. It’s a step up from their Jadewood blanks. It has amazing sensitivity that it is said to gain from the Rosewood fore grip. I don’t know about that, but I do know these rods are amazingly sensitive.  The ALPS Light XN guides incorporate stainless steel components for durability and strength. No worrying with busted or bent guide frames on these rods.

Bolton spent a long time perfecting not only the number of guides on the rod but also the length of the handle.  He wanted a rod that had a great backbone but that wasn’t out of balance fishing big baits offshore.  Sometimes on heavy-action rods, they come with extra long handles and they aren’t conducive to casting as much as flipping.

Speaking of which, the rod performed amazing well as a pitching stick. I’ve flipped fish out of matted grass and metal boat docks with ease.  It presents the baits well and you get a good solid hookset with both braid and fluorocarbon line.

I also threw big spoons on the rod. While Bolton actually likes a rod with a little less tip for big spoons, I found it a perfect rod for how I’ve become accustomed to fishing a big spoon. I sweep and pull and lot rather than whipping snaps. This rod landed an absolute ton of bass for me this spring summer and into the fall on big worms, big football jigs and big spoons as well as some flipping jigs and even some deep diving crankbaits.

Because the rod is well balanced, light and extremely sensitive, it plays well in a lot of roles. So it’s hard for me to say it’s a true heavy power rod which often has the connotation of being one-dimensional. It’s more like a medium-heavy rod with some shoulders to it for setting the hook at distance.

The rod prices at $209 but comes with a limited lifetime warranty. If you’re looking for a workhorse rod for fishing away from the bank. Or a good multipurpose rod that has the backbone to put the steel to the fish’s mouth, then you should definitely consider the Denali Signature Series Terry Bolton rod. You can find them at tacklewarehouse.com or denalirods.com. 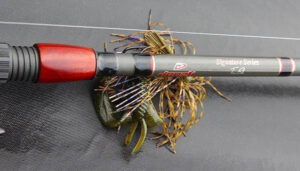 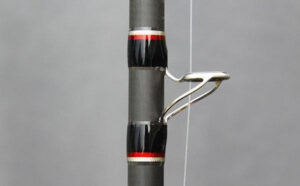