The Bass Mafia Terminal Coffin was one of my favorite new products last year at the 2016 ICAST show, so I’ve been anxiously awaiting its arrival this winter. I finally got it in January of 2017, so thought I would share my experiences with this hotly anticipated new storage system.

Terminal tackle can be tricky to organize, store and carry around in your boat. I think I’ve tried about every way under the sun from multiple boxes, bags of smaller bags holding each miscellaneous item from hooks to swivels and o-rings to drop shot weights. 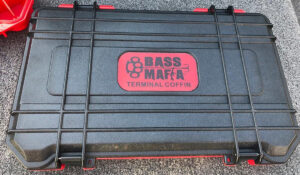 The Terminal Coffin gives a very organized spin on storing hooks, weights and miscellaneous terminal items for rigging plastics and other lures. The system is comprised of one of their standard Bait Coffins with three of their new Hook Coffins and three of their new Weight Coffins in place of standard dividers. So you are basically getting a waterproof, crushproof tackle box with 6 tackle boxes inside of it.

Each Weight Coffin is designed specifically for certain sizes of weights from big 2 ounce punching weights down to 1/16 ounce tungsten weights. The Hook Coffins will hold between 15-20 hooks of various sizes. Then at the bottom of the Terminal Coffin are several small divided slots for holding various items. 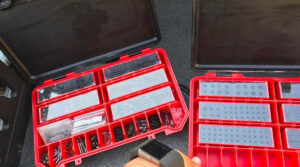 I set my Terminal Coffin up with 5 inside coffins â€” 2 with weights and 3 with hooks and then left one slot wide open for bags of miscellaneous items. Then I filled each of the bottom slots with things like barrel swivels, pegs, beads, clasps, o-rings, dropshot weights, smaller dropshot hooks, etc. 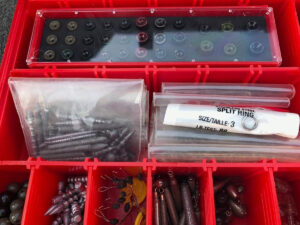 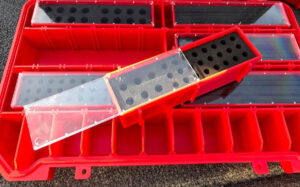 If you’re doing something like say flipping bushes or punching mats, you can just take out one little weight box and one little hook box out of the Terminal Coffin and keep those handy and put the terminal box back in the boat compartment. I like that modularity of the Terminal Coffin in that respect. I don’t have to have a big tackle box out on the deck all the time and I don’t have to keep going in and out of my boat compartment for the same two things.

The box is very water proof, and everything stays in place well. I didn’t have any small items going over the dividers and ending up in other compartments. The O-ring seal was one solid piece for solid waterproof protection. 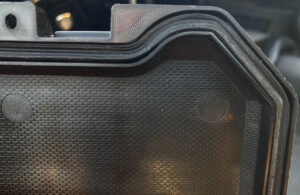 Terminal tackle can get expensive when you talk about 3 sizes of hooks in 4 or 5 different styles, several sizes of tungsten weights and then all the miscellaneous stuff you need for rigging plastics or modifying other rigs. I like that I can keep it all in a solid strong box that can handle the weight of it all and not warp or flex and get stuff mixed up. It’s not going to break if I drop it either. Or pop open and spill out everywhere. 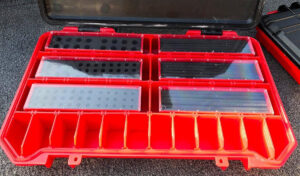 The latches are very strong on the Terminal Coffin. You actually should squeeze the box together at the corner to undo and close the latches much easier because they are so tight and strong.

The box comes at a premium, but that’s because you’re getting 7 filling systems in one small nearly indestructible box that you likely will never have to replace.

You can find the Terminal Coffin here at OmniaFishing.com and Tacklewarehouse.com as well as local retailers that carry Bass Mafia storage boxes. 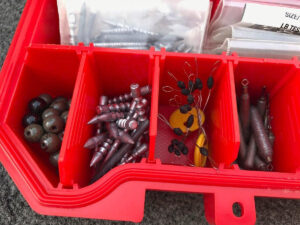