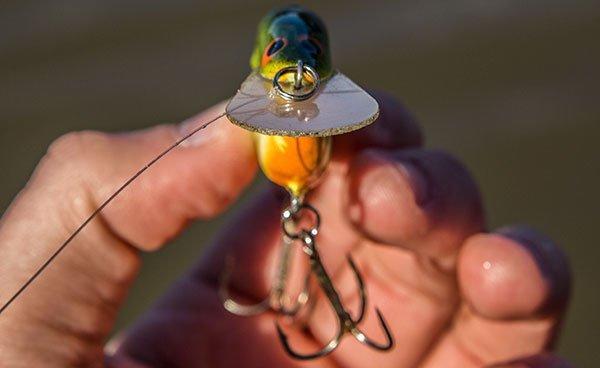 Every angler has different opinions when it comes to coldwater bass fishing, but personally speaking, you can barely pry a crankbait out of my hands when the mercury drops. There are certainly times when you need a wide-wobbling crankbait in the winter months, but I love utilizing small, flat-sided crankbaits this time of year.

I’ve been on a great crankbait bite on my home lake recently, giving me plenty of opportunities to test the new Bass Hound Cosmo Crankbait. Designed by two-time BFL All American and well renowned crankbait angler Kip Carter, this balsa beauty has impressed me beyond belief.

It hunts well, but remains true

I cannot put enough emphasis on the benefits of using a crankbait that hunts throughout the retrieve. If you’ve ever paid attention to a shad’s behavior, you’ll realize that they rarely swim in a straight line. More often than not, they’ll dash from side to side in an erratic manner.

The Bass Hound Cosmo Crankbait imitates this natural behavior perfectly. Whether you’re burning it through the water column or just barely making it wobble, it kicks from side-to-side throughout the entire retrieve. Even when you reel it as fast as you can, it never spins out or “helicopters” on the surface. Every second or two, the Cosmo will return to its center line, so you don’t have to worry about it randomly drifting to the side and causing unwanted hang-ups.

After Carter carves them, he hand-tunes each individual crankbait in a swimming pool. After a few casts with each crankbait, he cuts it off and moves to the next one until he has used them all. I have quite a few of the Cosmo Crankbaits and I have never had to take pliers to any of themâ€”each one I’ve used has run perfectly. 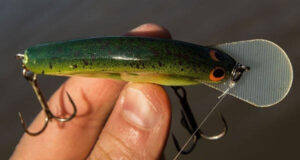 The effectiveness of a flat-sided crankbait is hard to dispute, but there’s one glaring problem in many of themâ€”they’re tough to cast. When you shave off enough balsa wood to achieve that special tight wobble, it results in significant weight reduction.

I’ve been truly surprised by the Cosmo’s castability. Most of the custom balsa crankbaits I own really limit my possibilities in windy weather, but this crankbait casts excellently. I’ve been throwing the Cosmo on a 7-foot, medium-action casting rod with great results. If you try to whip it into areas like you would a plastic crankbait, you’ll have a bit of an initial learning curve. If you let your rod load on the back cast, however, you’ll be able to use this crankbait in any condition imaginable. 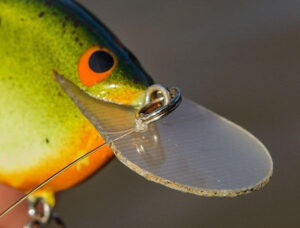 It’s actually a little difficult to classify the action of this crankbait as a “wobble”â€”honestly, it’s more of a “shimmy” than anything else. Although a lot of flat-sided crankbaits feel like you’re reeling in a leaf throughout the retrieve, the Cosmo vibrates your arm all the way up to your elbow.

Maybe it’s the circuit board lip or the angle of the line tieâ€”I’m not too sure, but this thing puts off some crazy vibrations in the water. I tend to use most of my flat, balsa crankbaits in clear water conditions, but its impressive water displacement has resulted in a lot of success in stained and even muddy water.

Very durable for a balsa crankbait 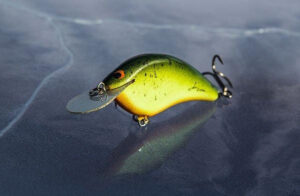 I have several tackle trays I refer to as my “crankbait graveyard”. It’s a sad thing, reallyâ€”spending all that money on balsa plugs, just to crack them on a seawall after a kamikaze cast. I don’t know why I keep them all, but it’s probably to help me cope with the loss.

The Bass Hound Cosmo Crankbait is very durable for a balsa crankbait. Whenever I fish a crankbait, I make every reasonable effort to bang it into whatever cover I can find. Bill shape doesn’t matter for meâ€”I’m going to put it through some serious crud. I’ve repeatedly knocked the Cosmo off of dock posts, stumps, rocks and laydowns without a single issue. Even the ones I’ve had for several months are totally void of cracks, splits and chips. Not to mention, they still run as true as the day I bought them.

If you’re looking to show the bass a totally different crankbait profile this winter, I absolutely recommend trying the Bass Hound Cosmo Crankbait. It retails at $19.99, but don’t let that scare you off. Carter’s craftsmanship and attention to detail will save you a lot of time, frustration and money in the long haul.

The Bass Hound Cosmo Crankbait is available at HomeBrewedTackle.com.