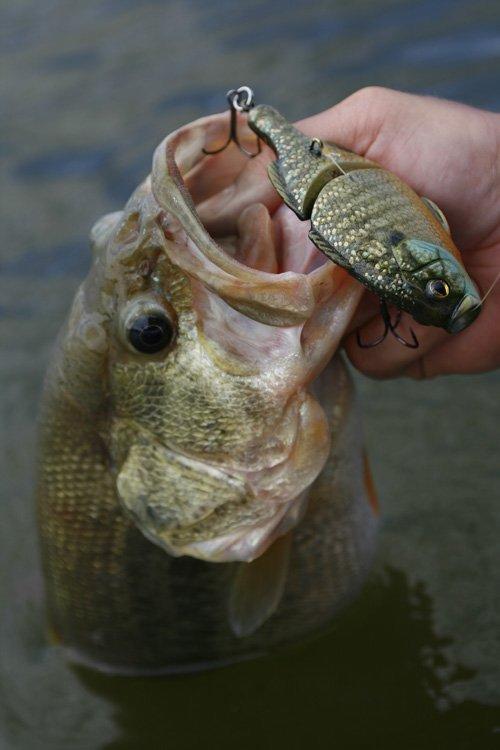 You basically have wake baits, poppers, walkers and prop baits for hard-bodied topwaters. But now there might be a new class of topwater baits that are jointed dying baits.

BaitSmith, LLC worked with lure designer Eric Smith to create a truly unique series of topwater baits called the Series “X” Bluegill, Crappie and Pumpkinseed. The bait looks like a swimbait at first glance with a single hinge separating the anatomically correct body into two parts. But upon closer inspection, anglers will see a hook on the tail and a hook on the side of the front section.

The bait has a cupped mouth but it’s not really a popper and there is no line tie on the mouth of the bait. Instead there is a hole in the mouth in which your line is thread through. It comes out just before the hinge of the tail and is tied to a ring on the side of the tail section.  The bait weighs an ounce but is only 4 1/4 inches long.

Sounds odd, but in the water it looks perfectly natural. As you pop the rod tip the bait’s tail clicks and flutters. With short quick rod twitches, the bait walks amazing well with a tight side to side action. So it’s part popper, part walker and part something else entirely. But we think the real key will be just shaking the tail. From the surface it doesn’t look like it’s doing much, but from the bass’s view, it’s going to look like a small panfish struggling on the surface.

Chris Lane has been fishing the bait on Guntersville for a couple weeks and has already caught bass to 5 pounds on it.

“It’s a fantastic bait,” Lane said. “It’s going to be a huge success next year on the tournament trail because there aren’t any other options like this that will really attract a big bite. I think it could be a game changer, because it will effectively target bigger class of fish. The paint job and profile is absolutely fantastic. The bass aren’t really in the right places just yet, but I think this fall we’ll get a giant on it.”

Lane has been fishing the bait on a 7-foot, 2-inch All-Star Swimbait rod with a high-speed Abu Garcia Revo reel. Ed Proulx of BaitSmith recommends you throw the bait on at least 15-pound test line. We threw it on 17-pound Trilene Big Game. Lane preferred monofilament over braid.

The bass aren’t really where they are catchable on topwaters consistently yet, but when they get there we are excited about throwing this bait around. It will be dominate we think around boat docks and of course of late spring bream beds.

The baits will retail for $39.95 each and the line will extend into a trout offering and a shad offering very soon.

All BaitSmith lures are handmade in the United States and they refuse to sacrifice quality in a competitive market. They are continually streamlining their processes to control costs and hopefully these baits will perform like we think they will.

We’ll get back to you when we’ve had time to test the baits at length.