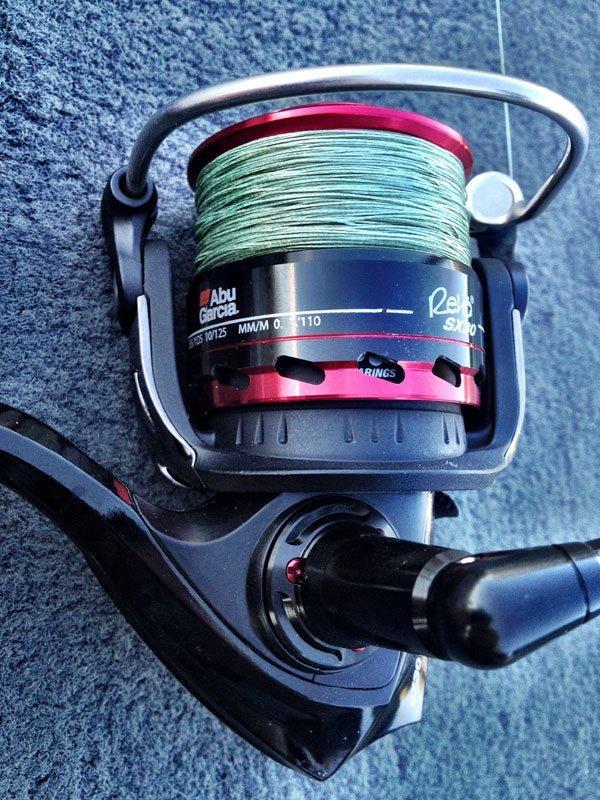 Want to know a little secret? I have caught the majority of my biggest bass on spinning gear, and I’m not afraid to admit it. Although I largely prefer power fishing, cutting my teeth on Lake Lanier gave me a great opportunity to get up close and personal with the largely overlooked art of spinning gear fishing. With that being said, I have been on a seemingly never-ending search for the perfect spinning reel. Throughout my quest, disappointment appeared to be inevitable, with the majority of my experimental reels ending up broken or shoved into a closet, never to be fished again.

Just when I thought all hope was lost, I had the opportunity to test the Abu Garcia Revo SX30. After several weeks of arduous testing, I’ve finally found a reliable, smooth and lightweight spinning reel that is great for a variety of situations.

There’s been a pretty gnarly Fluke bite going on in my area lately, so I headed to the lake to put my Revo SX30 to its first test. Spooled with 8-pound monofilament, the Revo SX30 casts like a rocket. If anyone would have told me that a spinning reel could bomb a Zoom Super Fluke upwards of 40-yards, I wouldn’t have believed themâ€”until now, that is. As a further testament to the extreme castability of the Revo SX30, I was able to put my Fluke into some pretty precarious places despite heavy winds. No tangles, line loops or infamous spinning reel blow-upsâ€”just flawless line management with every cast.

The Revo quickly proved itself with the more “spinning reel friendly” monofilament, so it was time to get down to business. The new Revo SX30 comes packaged with a separate, machined aluminum braid-ready spool, so I filled the reel with 12-pound braided line to see what it was made of. Before I even made a cast, I noticed how firmly the braid sat in the machined grooves. With a simple knot and a small piece of tape, there was no slippage whatsoever.

As I fished with the braided line for a couple of days, I became increasingly impressed by the Revo SX30’s line management system. Braided line and spinning reels don’t always go well together, but I didn’t have a single knot or any line twist. Whether I fished windy points or deep brush piles, the braid peeled off of the spool seamlessly, allowing for longer casts and increased stealth in clear water situations. Due to its excellent castability, the Revo SX30 also gave me the opportunity to catch ultra-shallow fish that I would have previously not been able to reach. That, without a doubt, is incredible.

I also had the pleasure of testing this reel with a spinning reel’s worst enemyâ€”fluorocarbon line. Before my experience with the Revo SX30, just the thought of fluorocarbon line packed on a spinning reel sent shivers down my spine. Although effective, not having excellent gear can turn it into an enormous headache.  To my astonishment, the Revo handled 8-pound fluorocarbon like a champ. The line remained tightly packed on the spool while Abu Garcia’s Slow Oscillation Technology aided in filling the spool evenly throughout my retrieves.

When you lay into a big bass with this reel, your definition of “smooth” will be redefined. Spinning reels have continuously been knocked for their inability to produce consistent levels of drag. Over the years I’ve had plenty that let out drag in short surges, making it extremely unpredictable when fighting big fish. The Revo SX30 has an outstanding Carbon Matrix hybrid drag system that sheds line from the spool effortlessly and reliably. Say goodbye to palming your spool when a big tank takes a dive right at the boat, because this drag system will make it completely unnecessary.

Plainly stated, the Revo SX30 feels awesome in your hand. With its new C6 carbon body, it is easy to notice the significant reduction in weight from previous models, making it a pleasure to use for the entire day. I am rough on my gear, and the Revo SX30’s X-Craftic alloy frame and its stainless steel main shaft and components have held up very well thus far, showing no signs of scratches or chips.

If you’re in the market for a new spinning reel, you owe it to yourself to consider getting your hands on an Abu Garcia Revo SX30. Priced at $159.99, the Revo SX30 gives anglers extremely smooth and dependable performance for a reasonable price.