The bass fishing in my area has been pretty tough as of late. Although it’s been a little frustrating, it’s given me the opportunity to test out the Abu Garcia Revo S Spinning Reel with several different finesse presentations. I’ve dabbled with a lot of spinning reels in the past but it’s been difficult to find a perfect marriage between high quality and affordability.

After catching bass up to 7 pounds with the Revo S Spinning Reel, I’m extremely pleased. This is an outstanding spinning reel with a reasonable price tag for most anglers.

There’s no “play” to speak of

The Abu Garcia Revo S has a very lightweight polymeric body and doesn’t rattle, click, shift or bend whatsoever. I’ve had several high-end spinning reels flat-out break in the middle of tournaments, but this reel is built like a tank.

It only weighs 8.4 ounces, so initially I was a little skeptical of its durability. I’ve worked this reel like a mule lately and have let several novice anglers beat it up and haven’t had a single problem with it. There’s no play in the handle, the bail or the spool.

Although the fishing has been tough lately for me, I’ve still managed to wrench on a few grown ones and every bass over 5 pounds I’ve caught recently has come on the Revo S. I’ve been pretty amazed at how well the Carbon Matrix hybrid drag system has performed.

I’ve had several big fish try to “dig” at the side of the boat and this reel handles it beautifully. There’s no slipping or surging when a big bass tries to head to deeper waterâ€”just velvet-smooth drag that makes short work of an otherwise hairy situation.

I also like how delicate the drag settings are. Whether I’ve had to set it a little tighter for shaky head fishing or looser for drop shotting, the Revo S allows me to intricately set the drag to my very specific needs. 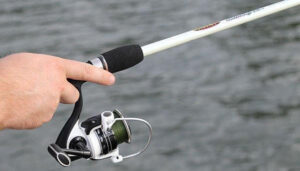 For whatever reason, some spinning reels are an absolute nightmare with certain types of line. Most recently I’ve been using the Revo S with 10-pound braid for my main line and it’s been absolutely perfect. It promotes very even line placement on the spool and even better, the machined aluminum spool allows for braid usage without backing or tape.

I know a lot of finesse anglers judge a spinning reel based on how it handles fluorocarbon and the Revo S does so very well. The line stays flat on the spool and I haven’t had any lumping or loops, even in windy conditions.

Throughout my college fishing career, I was often forced to “get by” with whatever inexpensive gear I could find. After a lot of trial and error, I’ve realized that you get what you pay for when it comes to spinning reels. Since using the Revo S, however, I believe you get a lot more than you pay for with this reel.

The Abu Garcia Revo S is priced at $129.99, and although it won’t be in everyone’s price range, I think it’s a great deal. I have some spinning reels that almost double this one in price, but I wouldn’t think twice to use this reel in their places. So far, I don’t have a single negative thing to say about it.

If you’re in the market for a new spinning reel for finesse fishing, I definitely recommend the Revo S. You won’t have to empty your bank account for it and it performs just as well as many more expensive models.