I’ve been fishing a lot lately with the Abu Garcia REVO LTX Casting Reel JDM. For years, I’ve enjoyed continuous success with Abu Garcia reels, but this model has absolutely spoiled me. If you’re able to afford one, I would absolutely recommend it. 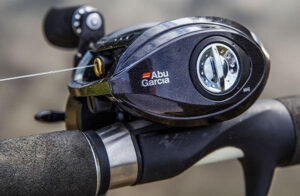 I previously mentioned temperamental spinning reels, but I’ve also fished with my fair share of aggravating casting reels. After a few hours of tuning them to your casting preference, you’d better not touch the tension knob or brakes or things—or your line, actually—could get ugly in a hurry.

The castability of the Abu Garcia REVO LTX Casting Reel JDM continues to astound me. I’m no stranger to the occasional monstrous backlash, but I’m telling you—you really have to try to get a backlash with this reel. It features a very shallow Infini II spool and a Magtrax brake system that come together to promote incredibly long casts with very minimal effort.

I purposely waited to write this review because I was dying to put it to work on a windy day. A few days ago, with wind speeds in excess of  15 miles per hour, I continuously made casts directly into the wind. I was casting a Rapala Shad Rap on 8-pound Seaguar InvizX and it was simply incredible. It didn’t backlash, the line didn’t loop on the spool and I only had the brakes turned halfway-up.

Not only does it eliminate most of your backlashes—the REVO LTX makes some absolute bomb casts with really lightweight lures. Whether you’re throwing a 3/16-ounce shaky head, a Shad Rap or even a drop shot rig, you’ll be amazed how far this reel sends them flying. Fall fishing is heavily dependent upon the presence of wind and the REVO LTX has helped me embrace it instead of cursing it.

Not just for finesse fishing

The JDM acronym in the name stands for “Japanese Domestic Market”. If you follow the Japanese bass fishing industry at all, you’ll know it’s well-known for its attention to detail and finesse-heavy emphasis.

I’m fairly confident with finesse fishing, but here’s the catch—I’d rather be flipping and pitching something on heavier line. I couldn’t resist myself, so I had to try it. 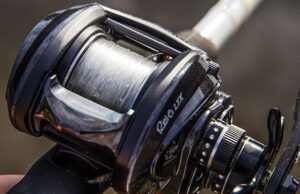 I stripped off the 8-pound line in favor for 17-pound Seaguar AbrazX and this reel has now become one of my favorite flipping and pitching reels. Because of the shallow spool, you’ll have to significantly decrease the amount of line you use. To the best of my knowledge, the Abu Garcia REVO LTX Casting Reel JDM holds about 60 to 70 yards of 17-pound fluorocarbon. 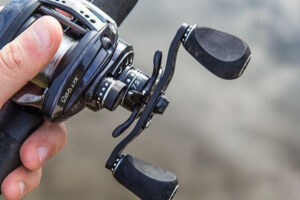 The restriction on line quality may seem inhibiting, but it hasn’t negatively affected my fishing. When I’m flipping and pitching, very rarely do I make casts further than 15 feet from my boat, so it hasn’t been an issue whatsoever. This reel is only available in a 7.9:1 gear ratio, so the amount of slack it takes up with one handle turn is pretty ridiculous. When you have a big bass knock slack in your line, it only takes about one full handle rotation to catch up with it.

Fishing light line on casting gear is dangerous at times. Without an incredible drag system, you’re prone to losing a lot of better bass. After fishing with this reel, it’s safe to say that Abu Garcia gets it.

The Abu Garcia REVO LTX Casting Reel JDM has a Carbon Matrix drag system that doesn’t surge when a big bass is on your line. When I first started using it, it was actually a bit strange experiencing such a smooth drag on a casting reel, but it’s absolutely necessary for finesse techniques on heavy-duty casting gear.

By turning the drag star, you’re able to adjust the REVO LTX very precisely. Regardless of your drag preferences for your favorite finesse technique, you’ll be able to find the “sweet spot” on this reel.

The Abu Garcia REVO LTX Casting Reel JDM weighs in at a modest 5.4 ounces. That may seem insignificant to some anglers, but it’s hard to accurately articulate the weightlessness of this reel until you put it in your hands.

Whether you plan to use it for deep finesse fishing or short-range power fishing, you’ll be able to tell a difference quickly. I’ve been most impressed by the lightweight design when fishing small jerkbaits around schooling fish. I don’t really enjoy jerkbait fishing but this reel has dramatically reduced my forearm and shoulder fatigue after a long day on the water.

I really like the handle grips that Abu Garcia put on the REVO LTX—especially in close combat situations when I’m pitching a big jig. In the past, I’ve bloodied a lot of knuckles on reels’ drag stars on emphatic hooksets, but not with this reel.

Landing big bass quickly is imperative in heavy cover situations, so sometimes you have to reel like a maniac to avoid hang-ups and a broken line. These grips are very easy to hold on to, even when you’re reeling like a maniac while fighting fish.

Priced at $379.99, the Abu Garcia REVO LTX Casting Reel JDM isn’t going to be in every angler’s price range. While some anglers prefer to keep things simple, just as many other anglers choose to invest their money in high-tech fishing gear. If you’re able to afford a high-end reel of this caliber, I wouldn’t hesitate to buy one.

The Abu Garcia REVO LTX Casting Reel JDM is available for a limited time at TackleWarehouse.com.