About a month ago I saw the release of the Berkley Slim Shad. I was pretty amped about this one bait in particular because I’ve been such and advocate of their original Berkley Mullet swimbaits. Those evolved into Berkley Swim Shads but for some reason I have a lot more confidence in the original Mullet that they came out with. That thing is a fish catcher so I was hoping this new Berkley Slim Shad would be a great alternative to that bait for the way I fish.

Several things stuck out to me immediately about the baits and even more after I’ve fished them now for a month. I thought the following were what make this a good choice for swimbait anglers: 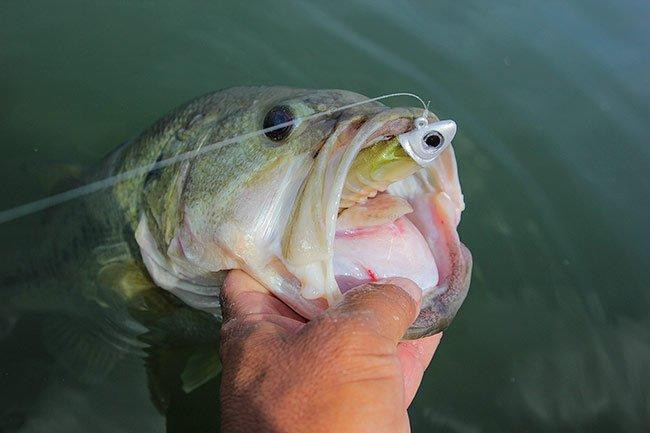 Here are my thoughts on this new larger than average swimbait from Berkley.

Bigger than most 6-inchers

There are definitely other paddle tail and shad tail type swimbaits on the market in the 6-inch size, but very few have the profile that this swimbait offers. It’s a little taller than most hollow belly and shad tail type bodies and seems bigger than 6 inches when you put it on a swimbait head.

It’s dense but it slides onto a swimbait head well and stays put. And that makes it easier to cast. I still like to add a drop of superglue to keep it in place because after I catch a few bass, a swimbait starts wanting to pull off the jig head. 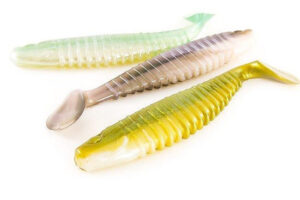 There were several colors I found attractive for mimicking big baitfish including Racy Shad, Tennessee Shad, Gizzard Shad, and Blueback Herring. And I bet Pearl White Silver Flake would be good in a little darker water.

I’d be interested to know what situations other anglers use their darker colors like Junebug, California, and Green Pumpkin Watermelon. I really don’t employ colors like that with this type of bait but am always to learn new tricks. 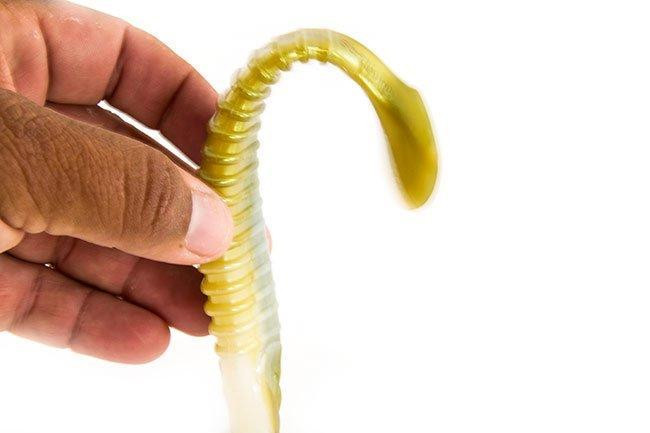 When I was learning big swimbait fishing from guys like Matt Newman, Don Moorman and some of the other well known West Coast big bait guys several years ago, I got educated on how a tail would effect the bait. One simple way to tell was to hold the swimbait upside down with the tail up and the air and look at the bend. If it barely kinks over, you’re going to get a very subtle tail kick. If it bends way over, the bait is going to roll and kick a lot. Somewhere in between and you’ll have a shimmy on the body and a hard kicking tail.

That’s what I found with this swimbait. The tail kick is perceivable through the rod at a moderate pace and you can feel the pressure of the tail action at a slow pace. Most of the time I tried to reel the bait slow enough to keep contact at or near the bottom but still feel some tail.

I like a the ridges on this bait. Rather than making it slick or smooth, the ridges give the bait some texture.  And, since it’s made out of Powerbait, as those ridges get roughed up by a few fish, there will be better scent disbursement and water displacement by the body.

You get two of these larger swimbaits for a little more than $4. For swimbaits much smaller I’ve seen much higher prices. For this size this is a good price. I’ve been taking a hot glue gun to my bodies after a day of fishing and repair the rips by melting the material back together. Some of those softbait glues might not be a bad idea other. I did have a few of the bodies tear around the hook of the jighead. But it’s to be expected when a smaller bass say 3 pounds has to engulf a large swimbait and then thrashes around trying to get unhooked. 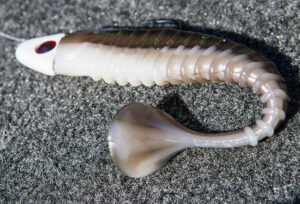 I have fished the baits for the last month pretty heavily. I’m very happy with them so far. They throw well. They swim well. And, most importantly, they catch bass well. I’ve had bass 2 pounds swallow it whole where you couldn’t even see the lure when they closed their mouth. I’ve had a 7 pounder choke one down with a 1/4 pound gizzard shad in his mouth.

I’ve noticed you’ve got to let them load up on this bait which is common for most swimbaits. Don’t set when you feel them thump it. Give them an extra second to hit it and get it back in their mouth. I’ve had some smaller fish grab it from the tail and pull it down. I’ve had several bites that just felt like a little extra weight which I suspect is when one comes up from behind and keeps swimming at you.

But for me the key is they are biting it and eating it most of the time. When you reel it through a school you will have some fish roll on it. I’ve just been keeping it coming until one finally latches on.

I like having an exposed jighead on swimbaits I fish on the bottom. That way I can feel the bottom and what I’m swimming it over. 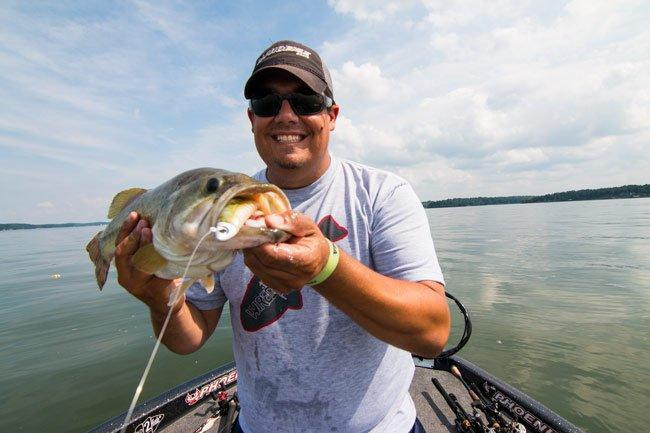