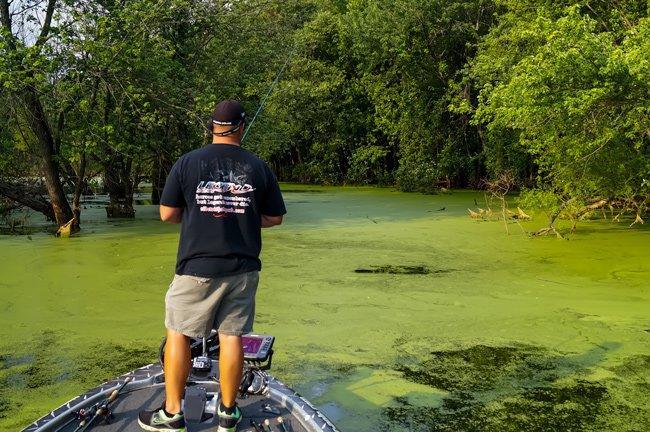 Some think of 8-foot “broom-stick” rods and 65-pound braid with an ounce of tungsten at the other end. Others imagine the thrill of a boiling 5-pounder rocketing out of a deadfall. For me it will always be the anticipation of that small line tick, or the mushy feeling you get when something just isn’t right, causing you to “put the wood” to that unsuspecting nibbler.

Whatever images come to mind, it is probably unlikely that the word “finesse” had anything to do with them.

Despite the inherent “power” nature of the flipping presentation, many anglers are already implementing aspects of finesse into their flipping approach without even knowing it. Turning off a fish finder or using a push pole to move around a grass bed are forms of finessing your way to flipping bass.

Elite Series Pros Chris Lane, Randy Howell, and Kurt Dove recently shared the integration of finesse elements into flipping. Each has integrated additional ways to “finesse” while flipping  and pitching that allow them to catch more and bigger bass.

Chris Lane fishes a wood and vegetation with a finesse approach. Photo by TJ Maglio

Chris Lane â€“ Lighten up and slow down

Coming from Florida, 2012 Bassmaster Classic champ Chris Lane has probably spent more time flipping shallow grass beds than many of us have spent in total on the water. In that time, he has developed an acute appreciation for when and where to implement finesse into his flipping and pitching approach.

“In places like Florida, where the bass get notoriously finicky during cold fronts, there are times where you absolutely have to finesse the fish to get bit,” Lane said. “You’re still flipping because the fish don’t leave, but it becomes more important than ever to slow down. That means being more thorough, soaking the bait longer, but it can also be a big benefit to slow the fall of your bait by using a lighter weight.”

A slow fall can be a major trigger if the bass are feeling pressured by weather or anglers.

“If the fish are aggressive, they will move from one side of a mat to another to eat your bait. When conditions get tough, though, they won’t move more than a couple feet. Having a slow falling bait that hangs in their face can really trigger strikes.”

A great example of this occurred for Lane at the 2014 Bassmaster Southern Open on Florida’s Lake Toho. In the event, a cold front killed what had previously been a great flipping bite for Lane.

“I had been catching them really good leading up to the tournament, but that cold front dropped in and completely shut the fish down. I scrambled around for a while and then downsized my weight from a 1 1/2-ounce Reins tungsten sinker to a 1-ounce, and I was finally able to catch the fish. As disappointed as I was, if I hadn’t switched to that slower falling bait, I probably would have finished at the bottom of the standings.”

Slowing down a bait’s fall isn’t the only way Lane finesses his flipping. He also emphasizes slowing down his overall cadence. On a hot, aggressive bite lane might only let the bait soak for a couple seconds in between flips. When he is finesse flipping to finicky or pressured fish, that number may swell to 20 seconds or more.

Lane also dissects a piece of cover much more thoroughly when conditions get tough, focusing on really picking apart every portion of the cover, which is another way of slowing down. 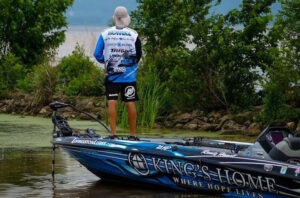 Randy Howell goes back through his area with a more finesse approach. Photo by TJ Maglio

If you examine some of the most popular flipping baits, you get the impression that finesse was the farthest thing from the minds of their designers. Baits like the Flappin’ Hog, Sweet Beaver, D-bomb, Wooly Bug, and Brush Hog have names with big connotations. They also have an array of pincers, flappers, paddles and appendages designed to attract not only bass, but also anglers as they strut their stuff on the tackle shop shelf.

“Everybody loves throwing the big, bulky jigs and creature baits, and I’m no stranger to that myself. I frequently flip a Rattleback jig or a Yamamoto Flappin Hog, but when the conditions or fishing pressure get the fish down, I change up my bait to something with a more subtle action. I have caught a ton of fish flipping a Yamamoto Senko or Ika when other patterns die.”

“In situations where there is a good flipping bite that suddenly dies, it’s not often where the fish actually leave. Heavy cover fish almost never leave heavy cover; they just get really tightlipped. A subtle bait like a Senko or an Ika is usually the way to catch those wearier fish.”

Subtle baits generate flipping and pitching bites when others fail because the fish are used to seeing the same baits.

“Most of those grass fish have never seen anything like it. Anglers are beating them all day with loud jigs and bulky plastics, then a Senko shimmies slowly in front of them. They can’t resist it.”

Howell recalled an Elite Series event on the Harris Chain in 2011 where he had located a good stretch of reeds during practice, and he shook off a bunch of bites flipping a Yamamoto Flappin’ Hog. However, a cold front passed through right before the event and dramatically altered the bite.

“The first day of that tournament, I flipped that whole stretch of reeds with a Flappin’ Hog and didn’t get a single bite. I knew the fish hadn’t left, so I turned right around and fished back through it flipping an unweighted Senko. That first pass I caught 17 pounds, eventually culling up to 20 before I left.”

Although tough conditions and heavy pressure are the main factors that lead Howell to flip a finesse bait, he will also do it when the traditional flipping bite is going strong to really seine an area.

“I frequently make a last pass through an area with an Ika or Senko even if I am catching them well on something else. It can often trigger a couple of key bites or get you an extra fish, which in a tournament can be all the difference.”

Usually when flipping a Senko or Ika, Howell will still use his trusty Daiwa flipping stick, but opts for a little lighter action than with the heavy stuff. He also generally fishes it unweighted, or with as small a weight as he can get away with like 1/8 or 1/4 ounce to just get the bait through sparse cover. 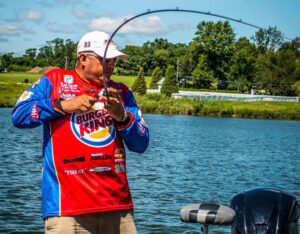 Kurt Dove doesn’t worry about his lighter pound-test line holding up in cover with big bass. Photo by Garrick Dixon

“We spend hours debating which lures and rods to use, but not nearly enough time discussing the connection between the two. Most anglers think they need 25-pound fluorocarbon and 65-pound braid just to get a fish into the boat. There are obviously situations where super heavy line is warranted, but there are also a ton of advantages to reducing your line size when flipping.”

“It is really obvious when you flip grass in 5-10 feet of water. Rig up one rod with 65-pound braid and another with 40-pound and start flipping. The thinner 40-pound braid will allow you to penetrate grass much better with a smaller weight and creates a more natural looking presentation, which can generate more strikes.”

Dove lives and guides on Lake Amistad, and he has flipping fish available pretty much all year, whether they are in flooded timber, deep grass or docks. Amistad is also known for giant bass, so you’d think Dove would be concerned about breaking fish off with lighter line.

“Today’s lines are better than when I started bass fishing. I exclusively use Toray line now. Even on Amistad’s giant bass, I feel confident flipping with 40 or 55-pound braid most of the time rather than the super heavy stuff. You need to pay a little more attention to your knots, and check your line often if you are in heavy cover, but that’s something you should be doing already with any line.”

It’s not just braid and grass situations in which Dove recommends downsizing your line while flipping, he also does it when he’s fishing hard cover with fluorocarbon.

“My general rule of thumb is to spool up the absolute thinnest line I can get away with considering the cover, fish size, and other factors like zebra mussels or concrete. Going down from 25-pound to 20-pound or even 15-pound fluorocarbon can be a great way to generate additional bites each day. The sparser the cover, the lighter the line you can use.”

We all love to flip and pitch. It’s one of the few techniques that is almost exclusively bass-centric. In fact, our collective love of flipping may be one of the things that bind all bass anglers together.

Unfortunately, there are times that the flipping bite just seems to die. If you have historically just packed it up and went out deep to throw a Carolina rig in those circumstances, you may be missing out on some additional flipping action.

Doing things like slowing down and decreasing your weight, switching to a finesse bait, and downsizing your line have helped Elite Series Pros Chris Lane, Randy Howell, and Kurt Dove catch fish and cash checks in events where many anglers would have given up on the big stick.