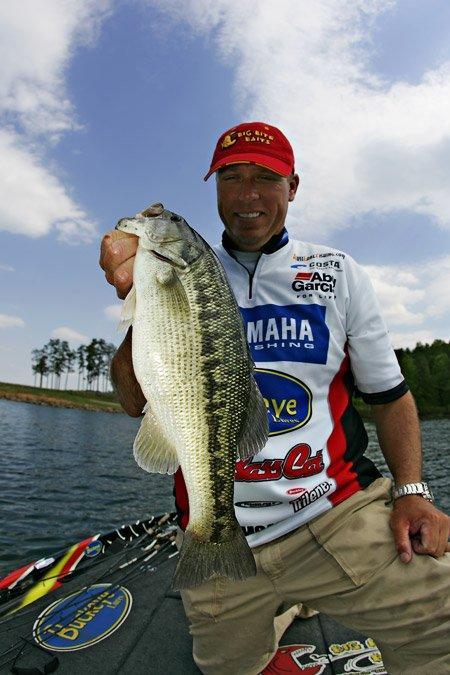 The first cast landed out in the middle of the lake. There wasn’t a piece of visible cover to throw at within a mile of the boat. Yet Bassmaster Elite Series angler Russ Lane made cast after cast to the same spot. He’d fired the school up on ledge on Lake Guntersville, and now he was searching for a big bite. He fired them up with crankbaits but now he turned to his ace in the hole for bigger fish in this event, the Big Bite Baits Kriet Tail Worm.

On cue, Lane set the hook and the fight was on. One of his biggest fish in the event fell for a big worm dragged along a shell bed on a ledge.

“I used the crankbait during that event to get my schools fired up, but the big Kriet Tail worm accounted for four or five of my biggest fish,” Lane said. “I will probably get ridiculed, but I actually put the big worm on the back of a football jig and caught several big fish. To me it’s just like the old mop jig theory. I was just trying to make a much bigger profile to keep the little ones away, but the old big ones would pick it up.”

Lane confesses he’s cranker at heart. He loves to catch bass on a crankbait and that has accounted for more money in his career than any other bait. But he acknowledges that the worm has its time, and when you let the fish tell you what they want, it could be the difference between a big finish or being an also ran in tournaments.

“I love to catch them cranking when they first get out because those first schools are real aggressive and usually are really big on small spots,” Lane said. “But after a couple weeks of fishing pressure the fish are less aggressive and the worm really starts to shine.”

He likes the profile of the worm as the water starts warming up. But thinks Big Bite Baits did something unique, and the guys on tour aren’t talking about it much but they are throwing it.

“Two things make the worm special,” Lane said. “The body is real thick which gives it a bigger profile than most. It’s got a real wide ribbon tail that is thin enough to have a lot of action. So the worm moves a lot of water because it’s large but made to have a lot of freedom to move.”

Post spawn fish are opportunist. They don’t want to expend a lot of energy, and what savvy anglers have discovered on lakes along the Tennessee River is that you can throw some big offerings to those schools that first get grouped up on the ledges and a bigger profile often produces bigger fish.

Lane throws the worm in the winter and has caught big fish when the water was very cold. It’s a big bait that gives him another slow option in cold water.  He’s also found that the worm is dynamite for bedding bass.

“It’s not always a deep deal with this worm,” Lane said. “That big worm catches a lot of fish on beds for me. When you can’t get them to bite those smaller profile baits, you throw that big worm in there. It lays all the way across the bed, and they can’t stand it.”

One constant is that Lane likes to keep the worm on the bottom. A slow drag has always worked better for him than hopping the worm does. As long as he’s making the right cast each time, the slow drag gets more bites.

Tools of the Trade 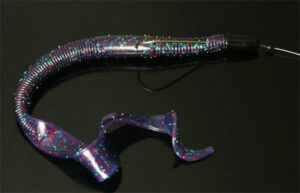 Lane throws the big worm on baitcasting tackle with 14- to 20-pound fluorocarbon. He matches the worm with a 3/8-ounce up to a 1/2-ounce weight. He likes 14-pound line when he’s fishing the deeper ledges out 20-25 feet. But he’ll boost his line size up to 20 pounds when they get on the shallow ledges 15 feet or shallower.

One exception is lakes with a lot of hydrilla, he’ll go down to a 1/4-ounce weight and fish the worm up on the hydrilla. When a lot of anglers have been through an area, he’s found that almost swimming the worm slowly over the top with a light weight is deadly for catching pressured bass.

Lane likes a high-speed reel. He usually opts for a 7:1 baitcaster. The main reason for the high speed reel is that so many big fish will hit the worm and swim right at the boat. It’s paramount to be able to catch up with the fish quickly and get a good solid hook set. He always fishes the worm on a heavy-action rod.

With this combo he can reel quickly and take up as much slack as possible, and just before the fish feels his tension, he sets as hard as he can and continues to reel as fast as he can until he feels he’s moved the fish his direction.

He uses straight-shank Gamakatsu worm hooks tied with a Palomar knot. He always makes sure his lines are parallel and not crossed before cinching down the knot and has never had an issue with fluorocarbon breaking on him.  He puts shrink wrap on his hooks and a dab of superglue to hold it all in place.

“I just feel like if I don’t get all the slack out before a hookset or just keeping pressure on a fish, a straight shank will sink in better on the fish than an offset hook will and I get more hookups,” Lane said.

Lane always pegs the weight because he feels like he can detect and get more bites with the weight in direct contact with his bait.

One thing about big worm fishing this time of year is getting in a rhythm with a school of fish on an offshore spot and then keeping the school biting. A worm seems like a slow presentation but part of getting the school going and keeping them going is fighting the fish quickly and not delaying after landing a fish. But just getting confidence in a spot can be a hurdle for some anglers.

“One of the biggest things is not getting overwhelmed by not being able to see what you’re throwing to,” Lane said. “You have to visualize what you’re feeling. All the feedback that you’re getting from the bait, line and rod has to be interpreted. If you feel it grinding, you need to know if it’s wood, rock, shells, etc. I always visualize a fish sitting there looking at my worm and then think about what I did to make it bite.”

Let the fish and the conditions dictate what you do. As long as you make the same exact cast with the exact same bait and keep getting bit, keep doing it. If you go four or five casts without a bite, then Lane recommends changing angles, changing baits or changing colors. Sometimes you just have to keep your bait where the school is or which direction it’s facing.

But a lot of times Lane has found that if you’re catching them on Plum or Red Bug and they quit biting for a few casts you can really contrast the color to a black or junebug and get them going again. Then you can change back and keep a school going for a while on one bait.

Sometimes he’ll reach for a jig or a crankbait to keep a school going. The key is to not let the fish rest. Move around and find another fish that will bite to keep them going. Again you have to visualize the fish down in the school competing for baits and keep the school going.

It’s fast and furious. It’s a great way to catch some big fish. It’s a great way to learn your areas offshore once you learn to interpret what the worm is transmitting up the line to you. We all really became fishermen when we learned to fish a worm. Now upsizing to a big bodied 10-inch worm and throwing it out deep can make you a more complete angler and help you capitalize on big schools of fish like a pro.