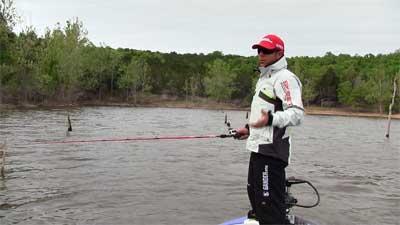 Most people think that when you’re frogging that you need to have you know a lot of cover in the water. As you can see the banks are pretty barren on this bank right here. The wind is kind of blowing in on them and so forth. This is kind of ones of those things where it’s an open water frogging deal, you know the fish are up shallow right now and they’re wanting to feed and wanting to eat. And when you look at this bank it doesn’t look much like you know a frogging bank at all and that’s some of the things I’ve learned over the years is that you don’t have to have all of that cover in the water for it to be a good bank.

Which in a sense is good because nobody even thinks about throwing a frog on something like this where we have a lot of wind blowing up on the bank right now and it’s actually really good, the boat is only in 5 feet of water so the fish doesn’t really have to move much to come up and get it, just a foot or two or three feet or whatever for him to get an easy meal. So a lot of times I look at banks that I think look really good for frogging which other people might think they don’t and those are times when I usually catch a big one or catch three or four doing it down you know a certain stretch.

It’s just stuff that I’ve learned over the years of throwing it that you can catch a frog fish anywhere you know, it really doesn’t have to have to cover although I would much rather have the cover there but when it’s not they’re still wanting to come up for the bait and that’s really key for me because I know that I can catch fish on these banks when you know the general other fisherman would overlook it for throwing that stuff. You could probably throw a worm or a small crankbait and so forth and catch them. But for me I like looking for the non-obvious stuff that stuff that you wouldn’t throw anything on and it works man, it works really good!