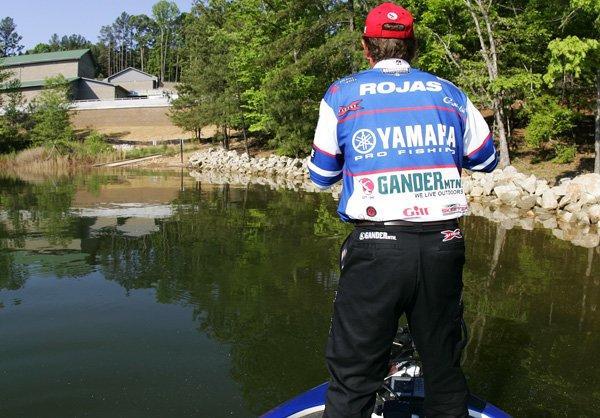 The bass spooked off as the boat glided over the contrasting spot on the bottom. “That’s a pretty good one,” said Dean Rojas, a name synonymous with sight fishing after setting the one day B.A.S.S. weight record sight fishing for bass on Lake Toho. “We’ll see if she’s catchable.”

He spun the boat around and sat way off the bed and waited. The bass made a big wide circle around the bedding area but never came close to the bed. Rojas shot his bait up past the bed and waited for her to make her turn. As she eased closer to the bed she changed her track and moved in closer making a much tighter circle to the bed.

“Yep, we’ll catch her,” Rojas said. “She’s already reacting to my bait being there. The bass still hadn’t come back to the bed, but just the fact that she was now circling much closer gave Rojas confidence the bass would bite. This is something he’s learned from watching and studying thousands of bass first hand.

Rojas has a natural tendency to aspects of fishing that are visual. While he’s a great sight angler, he’s probably better known for his prowess with a frog, namely the series of Bronzeye frogs he’s helped design for one of the top tackle manufacturers, SPRO. He sees a lot of the fish he catches on a frog believe it or not. They see the frog from a long ways off sometimes when he fishes it in open water. Some would say he has a natural ability when it comes to looking at fish and visually reacting to what he sees.

“I guess I’m good at the visual parts of fishing because that’s just how I learn best,” Rojas said. “I never get something when someone just tells me. I need to see it to understand it fully. That’s how I’ve always learned stuff.”

Rojas was the one doing the teaching on this day, about bedding bass, frog bass and the visual cues with both. 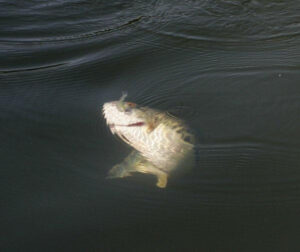 Rojas put the trolling motor on high and scoured the banks sitting off as deep as he can still see the bottom and looks for beds but more importantly bass. If one of any size spooked off, he circled and to see the bed the fish came from.

“In practice I find beds, determine the mood and size of the bass and make notes on what I found so I can pull right back on the fish in the tournament,” Rojas said. “I never blind cast to bass. I always get up there where I can see them and make them react.”

In sight fishing, it’s all about how a bass reacts, and he wants to see how the bass reacts on every cast. He will try to keep his distance whenever possible and uses a simple anchor and rope as well as a push pole that he can stake down into the bottom and tie off to hold his boat still when he sets up on a fish.

Oddly his tackle seemed overbearing for someone who prides himself on managing how the fish react to his presentations. He had a big heavy baitcasting rod and reel with heavy fluorocarbon line, 20-pound test in fact.

“I never have understood why guys throw spinning rods and light line at bedding bass,” Rojas said. “Those fish don’t care. I mean a drop shot is fine, but bubba it up and use heavy tackle. I want to put all the advantages I can in my favor because these bass are hard enough to catch already.”

After nearly 30 casts to the same spot the fish is really working now, spinning on the bait as it enters the bed, flaring and chasing it 10 feet out of the bed several times as Rojas reels it away quickly. He’d experiment with big hops, drags and swimming it out of the bed until he figured out what got the best reaction. He’d figured out where to move it from and to so that he could make the right cast everytime.“

They can’t stand this thing,” Rojas said. He was using a prototype bed bait that he hopes Big Bite Baits will be releasing soon. He was Texas rigging the plastic bait that was barely 3 inches

“I always use a big hook and a little bait when I sight fish,” he said. “They are bad about biting the end of a bait, but if you scale your bait down and use a hook that covers it head to toe, you again have the advantage.”

Small baits like his signature Big Bite Baits Fighting Frog and Yomama are great for this approach, but he’s been experimenting with the bluegill imitators this season on the Elite Series and the bass really react to it.

The fish flared and Rojas set the hook hard. She wallowed around on the surface and tried to jump but her size and fatigue made it difficult to get airborne. Rojas lipped her and let out a big laugh.

“What a spotted bass,” he said. “That might be the biggest spot I’ve ever caught! How cool was that!”

The bass went from making big long circles around the bed, to much smaller close circles to finally resting in the bed and chasing away his baits as they entered. He relied on visual cues from the fish to know when it was interested. To know when it was getting aggressive towards his bait and when it finally bit. He never felt the bite, but saw the fish flare on the bait like it sucked something up. That was his cue to swing. And it was simply a matter of realizing what he saw and countering with moves and presentations to stir the fish into biting.

The same can be said for his frog fishing. 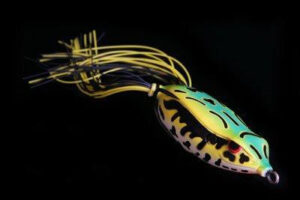 Rojas and “Kermit” are mainstays on the Bassmaster Elite Series warm water events. But Rojas picks the frog up when the water starts warming past 55 degrees in the spring.

But as he sight fishes a lot in the spring, he’ll throw the frog shallow and catch a lot of guarding fish and roamers before he ever gets close enough to see them.

Rojas designed a frog rod for Quantum that he points out as a key to his success with the frog.

“One of the biggest mistakes I see novice anglers make is not using the right equipment,” he said. “They will throw a frog on a limp rod with monofilament line or too light line. Again you want to put all the advantages in your favor. You need a lot of backbone but a light tip to work the frog right. That’s the key to my Signature Series Rod. And I always throw braid with the frog because I’m usually making really long casts.

“The other thing I see rookies do wrong is not set the hook hard enough. I don’t do anything special other than try to set it as hard as I can every time. That’s why braid and backbone is so important.”

Rojas throws a frog with tremendous velocity. He’s able to throw it low and get under and through the cover he fishes. He’s then able to know how to move the frog to elicit a response from the bass. That’s the visual part of frog fishing. It’s not seeing the bass as much as it is know how they react to different pops and cadences of the frog movement. Sometimes you have to walk it.

And sometimes the differences have to do with the cover he fishes – aquatic vegetation, laydowns, rocks, docks, etc. But this is the part of fishing that Rojas can’t teach others. Anglers have to spend the time reacting to the bass and watching how they react to certain retrieves. The best advice he has is his own confidence in what he does from his time watching his bait and the bass.

Have confidence in your equipment, cast with confidence and experiment with your retrieves. And learn to watch bass. You can learn as much or more from them than another angler.