This time of the year, fluctuating water defines the fishing. Normally the water is rising because of spring rains and also fisheries that have summer pools bring the water levels up to put more cover in the water and give more navigable access to bays and coves for summer boaters.  But with too much rain, fisheries get flooding, and the once small areas of bushes to flip are now complete forests of cover.

When the water rises it can be tough, and we’re going to have a feature on fishing high water in the next week or two. But recently Kentucky Lake flooded as the bass were coming shallow to spawn. There were several guys catching them shallow during the recent FLW American Fishing Series, but the top finishers were fishing out on the deeper lines where the bass had moved up originally and not moving shallow with the water.

A week later, however, Kentucky Lake and the Tennessee River has been dropping more than a foot a day. The bass had to move with the water. Some found their shallow bushes didn’t have fish in them. What we found this week was the moved from the bushes in the back to bushes that still had plenty of water on and around them. By moving out to points and smaller steeper pockets with good isolated bushes we caught several nice keepers flipping Big Bite Baits YoMamas and Yum Wooly Bugs with punch skirts from Talon Lures and BOSS Fishing Products.

We also picked up several crankbaits including a Bomber Fat Free Shad, Norman DD22, Strike King Series 5 and 6, and a Lucky Craft Flat CB D12 . All in chartreuse because the water was so muddy. We targeted points coming out of spawning bays, and the bass were stacked on several points. We caught 5-pound bass mixed in with 12- to 14-inch short fish. But it was every cast for a while, even in the mud.

So don’t fish memories. Move with the water. A lot of times when the water is pulling down rapidly it really gets the bass active both shallow and out on points and ledges and that’s exactly what we found this week. Check out some of our snap shots and let us know how you do when you move with the water. 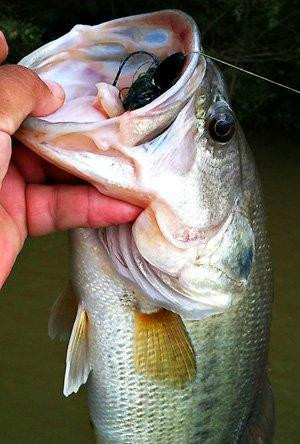