A floating bass worm is responsible for many of our oldest fishing memories. It proves equally effective in ponds, rivers, lakes and reservoirs alike. Despite its proven effectiveness, this method of fishing is quickly becoming a lost art, according to SPRO pro Mike McClelland. While the worms don’t in fact float, they fall so slow that they appear to be neutrally bouyant like much of the prey bass eat.

McClelland finds spring to be the perfect time to break out his personal favorite floating worm, the Zoom Trick Worm, to catch big bass. Understanding when, where, why and how to fish them will drastically increase your success this spring.

While many of us have had great success throwing Trick Worms toward blowdowns and other eye catching cover, McClelland knows exactly where to go when the water temperature passes the 50 degree mark.

“When I first start throwing the Trick Worm, I’m targeting the same areas I fish with a jerkbait in late winter—secondaries, channel swings and steeper banks—except just moving to the bank,” McClelland said. “As those deep, wintertime fish start to migrate and get ready for the spawn, it’s prime Trick Worm time.”

As spring progresses into the spawning period, he makes sure to avoid over complicating his approach. He targets generic spawning areas, but he doesn’t necessarily use the technique to sight fish.

“Anywhere you find typical spawning areas, such as sand and gravel flats, you can’t forget about the Trick Worm,” McClelland said. “Even if they’re not locked onto beds, they’ll swarm to these areas and roam around. A weightless Trick Worm is an outstanding way to catch those bass.”

“Something about this bait really ticks off bass when they’re guarding their young,” McClelland said. “Some of my most aggressive strikes of the year come when I’m twitching a Trick Worm over fry in post-spawn areas.”

McClelland always considers throwing a Trick Worm throughout the entire spring but there are a few specific conditions that make it his go-to technique.

“One thing that makes me want to throw it more than anything is a cloudy, rainy and misty day,” McClelland said. “Something about that combination is just phenomenal. That’s not to say they won’t bite it on a sunny day, but that’s absolutely an ideal scenario.”

Another phenomenon that has produced some great results for him is warm runoff. A lot of anglers get frustrated by spring’s seemingly never ending rain storms, but McClelland embraces them.

“If the bass are just starting to get shallow but aren’t all the way there yet, warm runoff from recent rains make them move up in a hurry,” McClelland said.

Water clarity has little or no influence on his decision to throw a floating worm. After catching several giant bass in water with as little as 5 inches of visibility, he doesn’t let nasty water deter him. He will, however, break out some “loud” colors such as Merthiolate, pink, white and yellow. Conversely, he’ll reach for more natural colors in clear water situations such as green pumpkin or watermelon red.

As with many bass fishing techniques, there’s no concrete set of rules when it comes to effectively fishing a floating worm. McClelland is a strong believer in letting the bass tell you how they want it. “You want to fish it slow in two specific situations—when the bass first move up to get ready for the spawn and when you’re fishing around possible bedding bass,” McClelland said. “I like to start out with a retrieve cadence similar to fishing a SPRO McStick jerkbait, just twitching it along and then letting it settle.”

When the water warms up into the high 60-degree range and post-spawn females begin guarding their fry, he speeds his retrieve considerably. Keeping the Trick Worm close to surface, he uses a presentation similar to a popular topwater technique.

“If I’m fishing a Trick Worm at a rapid pace close to the surface, I fish it just like I would fish a Heddon Spook,” McClelland said. “I use the same cadence in both my wrist and rod. You want it to just barely break the surface because that’s when you’ll get the majority of your strikes.”

When the time comes to set the hook, McClelland has two different strategies. If he’s fishing it close to the surface and sees the bass boil or flash on the bait, he never sets the hook immediately. Instead, he waits a few short seconds until he feels the fish in order to ensure a solid hookup. When fishing it slow, he waits for a “spongy” feeling and any added pressure on his line.

“If you swing hard on your hookset, you’re going to miss a lot of fish,” McClelland said. “Instead of jerking, simply lean into the fish and reel faster. That small adjustment will help you land a lot more big fish.”

Two ways to rig it

When McClelland suspects that the bass may be locked on to their beds, he primarily rigs his Trick Worms wacky style on a Gamakatsu Wicked Wacky Hook. Although it’s a fairly simple rig, he modifies it to achieve a better action.

“Nail weights are essential to catching more wacky rig fish,” McClelland said. “I’ll almost always put half of a lead nail weight into the head of the Trick Worm to help me cast it more accurately to bedding areas around bushes and laydowns. The nail weight helps it fall straight and only gets crazy when you start twitching it.”

If he’s covering water and looking for reaction strikes, McClelland uses a weightless Texas rig on a Gamakatsu Offset Round Bend Worm Hook. Keeping things simple, he primarily uses a 3/0 or 4/0 hook size, but when faced with pressured bass, he’ll downsize to a 2/0.

“When you rig the worm, it’s important to just skin hook the point of the hook into the backside of the worm,” McClelland said. “You don’t want to make yourself pull the hook through the entire worm—you just need to pop the hook point free on the hookset. To make sure it swims correctly, just be certain that the worm lies flat on the hook.” 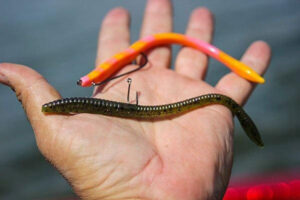 If conditions call for a weightless Texas rig, he tends to beef up his tackle a bit. Because he likes to throw this rig in heavier cover, he opts for 16-pound Sunline FC Reaction Fluorocarbon and a 6-foot, 7-inch medium-heavy Falcon LowRider XG Split-Grip Weightless Worm Rod.

“The Falcon Weightless Worm Rod is honestly the best Trick Worm rod you could ever possibly use,” McClelland said. “It’s helped me catch a ton of big fish.”

Now is a perfect time in much of the country to start throwing a Zoom Trick Worm. It’s by no means a new or fancy bass fishing technique, but if you follow McClelland’s suggestions, there’s a good chance you’ll stick some big bass with it this spring.