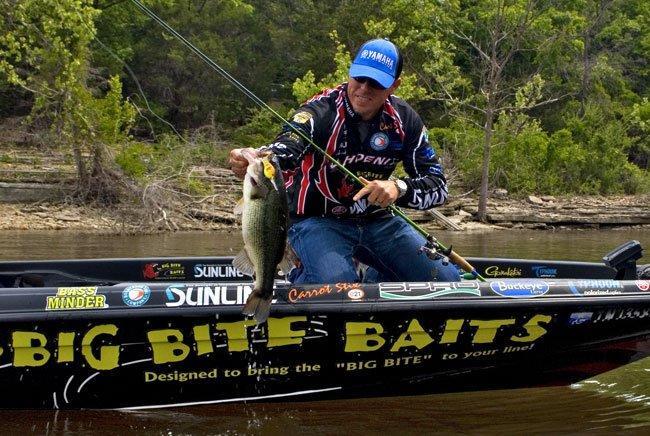 Being a successful angler has very little to do with understanding bass behavior under ideal conditions. Anyone can catch them when it’s “perfect.” It’s when the fishing gets tough and the bass are sometimes beat off of the beaten path that the truly skilled anglers show their worth. For it’s when the bass seem to leave the “obvious places” and set up on sneaky places.

These sneaky places aren’t sneaky to the bass. They are just the next thing down from where they were or where they are heading. The funny thing is we give bass a lot of credit for being mystical creatures who enter and vanish like the water in a river. When in actuality they are pretty much thinking about eating, spawning or nothing all the time. It’s that nothing part that spins us out. But it’s the feeding part that enables us to understand them better.

So we’re constantly looking for those zones where they can feed. When angling pressure or changes in conditions dictate, we have to be flexible enough to move off the common obvious spots whether they are shallow or the most obvious structure related areas offshore. So we tapped a Bassmaster Elite Series angler who has had success at various levels of bass fishing competition and won a lot of tournaments by looking for those in between sneaky spots.

Russ Lane is most comfortable when the bass move from spawn to post spawn and on through the summer. That’s when big crankbaits, jigs and soft plastics drug around on offshore places really tend produce against bass that are ganged up and feeding on structure. 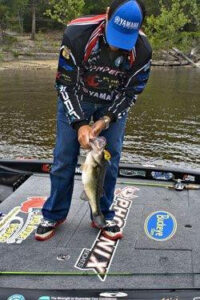 “Most of the good schools of bass I’ve found around the country are in that 8-14 foot range,” Lane said. “It doesn’t matter if we’re talking about Lake Fork or Lake Conroe in Texas or Lake Norman or High Rock Lake in the Carolinas or Guntersville or Kentucky Lake on the Tennessee River, bass gang up in that 8-14 foot zone after the spawn, somewhere on those fisheries and I’ve had a ball catching hundreds of bass off of spots like that.”

What’s key for Lane is finding all the factors that make a great feeding area but also a spot that doesn’t stick out like a sore thumb on a map because he knows every angler is going to go to the most obvious stuff. So like most other anglers, he starts by dissecting a good lake map. Then from there he puts in his hours idling looking for those conditions that can make a perfect spot in an out of the way area.

Lane starts his search either working from the spawning areas out to the main lake structure or from the main lake structure back to the spawning areas depending on how far out the fish. But usually his search has to do with large flats and cover. Flats in that 8 to 14-foot range offer great places for bass to gang up. Usually if you can find bass ganged up they will be relating to a depth change and/or a harder bottom.

The reason generally has to do with current. It’s a proven fact that bass like to feed in current. The current not only washes bait to the bass but it also speeds the bait up towards them and disorients the baitfish making them easier to eat a lot of them at a time. The bottom is generally harder around those current driven spots because the hard rock is what turns the current or forces it around and causes it to speed up a bit around the hard obstacle.

So once he finds a hard bottom in a depression, hump or rise or just something like a shell bed on the edge of a subtle drop that many anglers may have skipped over he looks for bait and pulls out his weapons of choice.

His latest addition to the arsenal is quickly becoming his favorite largely in part to the fact that he created it just for this scenario. The SPRO Fat Papa is his namesake crankbait. The crankbait is unique in many ways but for very specific reasons that’s he found over many years of trial and error cranking for bass in that mid-range depth in the post spawn and summer periods.

“We put a lot of thought into the Fat Papa. We started with its wobble. It has a wide wobble almost intimidating it’s so wide. We did that intentionally because we weren’t looking for a numbers bait but rather a big bass bait. We want the biggest alpha female bass to bite. We made the baits silent. We want the crankbait to hunt along and just appear in the fish’s strike zone before it has a chance to spook off the fish. We designed some very specific colors to help in all different situations. It’s got sharp Gamakatsu hooks. And the final attribute is a shaved lip on the underside. We did this so the bill would slice the water effortlessly and cut down on the fatigue associated with reeling a big wide wobbling crankbait all day.”

Cranking is an obvious choice on these out of the way areas because you often have to cover a lot of water and you’re looking for one bass to show you it’s in the area. The Fat Papa allows Lane to cover water but also target bigger bass at the same time.

Lane gave an example from the tour last year where this time of area played into his hands.

“There was a tournament last year where I found a community hole. But back behind that community hole on the main river, there was a bay. Coming out of that bay there was a pinch point, where the land closed the gap in the bay and actually sped the current up through there as it emptied out on to a hard bottom where fishing pressure from the community hole and current from both the dam and from just wind through that pinch point funneled fish through there. It just kept producing fish and reloading every day because the fish just kept coming to that hard bottom off the beaten path.”

Ideally he likes wind and a little chop on the water with a mild stain to the water. That way the bass don’t get a good look at the crankbait as it comes wizzing by. He’s seen days where if the wind blew with the current and made it stronger the bite was actually better. However in reverse if the wind blew against the current or no current the fish scatter and get harder to catch. Wind is still your friend even on these offshore sneaky spots.

He sticks mostly with three colors with the Nasty Shad, Nasty Herring or Tennessee Gizzard Shad. These three baits will take him from heavily stained water to ultra clear water and cover the bases. The clearer the water the more wind he needs for the crankbait bite. He will use the other colors too like the honey shad at various times of the year.

Otherwise he’ll drag a Buckeye Mop Jig or a Big Bite Baits Coontail worm on a Carolina rig around. In fact he usually crank an area first and then throw the jig and the worm around after he’s done to make sure he presented the bass a lot of different looks in an area especially if he feels the bass have been pressured off the obvious stuff and come to these places to escape the pressure.

For his cranking, he sticks with a 7-foot Medium power rod with a slower gear ratio baitcaster crankbait reel and his favorite new line for cranking this mid-range is 12-pound Sunline Reaction FC.

“The line is the best crankbait line I’ve ever used,” Lane said. “It has the sinking and sensitivity like fluorocarbon but it has some built in stretch. That stretch is nice when a fish strikes and when fighting and landing bass. I also like that it seems to snap a bait back off of cover when I hit something hard on a fast retrieve. That really seems to trigger bites.”

One caveat he likes is fishing these areas around grass. He likes to crank on the edges of hydrilla or over the top of it in deeper water. When he does this he will go up to a 14-pound Sunline Natural monofilament to give him better ability to rip the bait of grass if it buries. A lot of tournaments he fishes have been won cranking over and around hydrilla grass. That is one more variable that can make an out-of-the-way spot better.

Whether you’re fishing in the bays or out on the main lake, make a point to check those places down away from or leading away or towards areas where the bass have left or want to go soon and you’ll likely stumble upon an untapped sneaky spot to pull up and have the bass all to yourself. 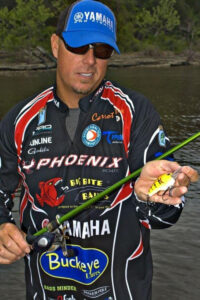