Assessing how the fish are grouped is part of putting together a fishing game plan. But a bigger part of it can be the decision to run a milkrun or to hunker down in one area and just milk it for all it’s worth. And then how do you actually “milk” an area? Is it with multiple baits and multiple presentations? Or, is it with one bait fished as thoroughly through an area as possible?

The answer: it depends. Just like everything else in fishing, it depends on the situation and your fishing really dictates how best to saturate an area and seine all the bass from it at a given time.

Vic Vatalaro fished a very small area on the Potomac in the recent FLW Tour Open, and short of a few bad “breaks” the third day, would have been contending for the win with Iaconelli and Clausen in the finals. The fact that he did it in a very small area on a massive fishery with a crowd of boats around him, really says something about how effective patience and persistence in one area can be the difference in catching fish and having an off day.

“Every tournament I’ve won, I’ve done it in one area with basically one bait,” Vatalaro said. “I throw a lot of baits in practice and at the start of these events, but it seems that the more I fish, the more I really refine the deal down. I build confidence that if I get my bait in front of a bass, he’s going to bite.”

A lot of anglers struggle with managing an area and managing a game plan when they fish tournaments or when they are just learning a new fishery. But it really boils down to finding an area with repleneshing potential, the right bait and patience to wait on the fish.

Find the Needle in the Haystack

“One thing I’ve learned about the Potomac is that the bass group up in small areas,” Vatalaro said. “What groups them up can very from hard bottoms, to current breaks, to types of vegetation or cover, or to more abstract things like bluegill beds as was the case last week. Some of the grass beds on the Potomac can be 5 miles long. So you have to find those small areas holding the better fish.”

That sounds simple enough, but finding the needle in the haystack can be a daunting task. Vatalaro likes to start big and keeps narrowing his search down to smaller and smaller areas until he’s literally on the bullseye.

On the Potomac, he fished about a mile stretch of grass in an area the first day of practice. In the last quarter mile, he had caught one fish that weighed 2 pounds. Then he went a bit further and caught a 3 &frac12; pounder. He marked the spot, and within about 10 feet, he had another quality bass that he shook off. With those two fish in a smaller area he started circling this one area in the grass bed. Over the course of the next 30 minutes, he shook off five more bass that grabbed his bait. He dialed in on the size and range of the area.

His next area he did the same. But this time the water was a bit clearer. He could see in the openings in the grass what he called “honeycombs” of bluegills. They were swarming around in the holes like they were on beds. Then he saw a 3 &frac12; pound bass cruise through. And then another. He fired a buzzbait over the top of the beds and a huge fish blew up on his bait. Now he was confident he could hunker down in an area and get the quality bites he needed to win. He had figured out that these bass were keying on bluegills and that they would keep funneling to his areas.

Stick to Your Guns

Once you have confidence established in an area, it’s a matter of getting the bass to bite when it counts. Even if you’re just fun fishing or visiting an unfamiliar fishery on a vacation, getting the fish to bite is not always about what you do, but it’s also about when you do it.

A great angler once told me that a bass isn’t usually just sitting in one spot waiting for a lure to come by him magically. He’s roaming around through an area, in and out and back and forth across it and the cover. So the key is covering the area with a blanket of casts and then hoping when your lure and the fish intersect, he’s interested enough to bite.

“I don’t mind to wait it out if I know the bass are using my area,” Vatalaro said. “I’ll just continue to fan cast the area, knowing that the bass are moving around in little packs and all the sudden they will pull up and decide it’s time to feed. At the Potomac River event, I had the dinner table set and I was just waiting for the bass to come to me. I’d go a while with no bites and then all the sudden I’d get a bunch in a row. Then it would repeat.”

Vatalaro knows when he does get a bite that it’s important to keep his lures in the water because he pictures a dozen to a half dozen bass passing through an area, and they all the sudden decide it’s time to eat. It won’t last long and you’ve got to capitalize on the timing.

The same could be said about fishing places that hold big concentrations of bass. A lot of anglers talk about fish triggering and getting the school fired up. Maybe it’s that the bass are moving up and down on the ledge and they finally decide to feed right where you’re throwing. It’s a timing deal sometimes. And other times if you see them on a spot on your graph it’s because they are already up in an area feeding.

Bait Choices Can Be Everything 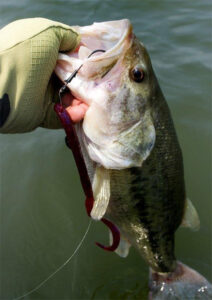 The bait for Vatalaro in the recent Potomac tournament was a tube. Nothing special, just a texas rigged tube that he would either pitch or bomb casts out to the fringes of his area looking for those fish that were roaming in packs. He threw seven or eight other baits during the event like a buzzbait, chatterbait, lipless bait, senko, shaky head and a big worm. But every fish he weighed came on the tube.

But it can be a worm one day, or a crankbait or a topwater. It’s a matter of figuring out what bait allows you to saturate the area the best and trigger the bass into striking when they finally “come to the table” to eat.

“You know me, I like to throw that tube,” Vatalaro said. “I’ve won some tournaments on Lake Erie with a tube but this was a little different deal. I felt like a lot of guys would be throwing worms and craw and beaver type baits, and the tube does a good job imitating not only a crawfish but baitfish like small bluegills with the way it falls.”

Vatalaro would Power Pole down in his area and make fan casts with the tube. Starting with short pitches and eventually working up to bombing casts on the fringe of the area. In fact many of his bigger fish came on some of those long casts. Something in which he felt that maybe boat pressure and the proximity of the boat to the bream beds had the fish spooked.

Then after a bite, he would raise his Power Poles and then stake them down again 10 or 20 feet over from his previous spot. This methodic approach helps him to not only cover the water but wait out the fish. Once he caught the fish on the tube so well the first day, he had confidence in that bait that if the bass did move back in and start feeding that they would bite it.

Pay attention to the baits on which you get bites, and use that to your advantage as you expand your areas. Use the baits you know are producing when you get around the bass to find more bass and expand the area further. Be patient and wait it out in a productive area especially if the area offers a lot of cover like a grass bed or series of other repetitive cover. So many good fishing days are because you find a good area, you stick with it and you find that key combination of the right cast with the right bait that fills your fishing coffers for weeks at a time or helps you do well in an tournament.