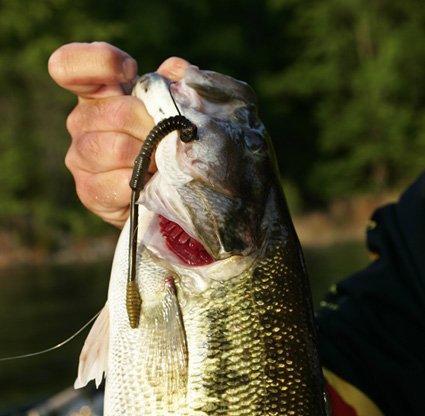 For some reason a squirrel isn’t an animal that strikes fear in the hearts of men. Yet I know guys who are deathly afraid of them. Not sure exactly why that is. Probably some freak childhood experience where a menacing squirrel tormented them relentlessly. Yet still, it’s hard to type that without a chuckle. But somehow they’ve come to fear and respect the dainty creatures.

Likewise a shaky head worm doesn’t seem like a weapon for catching big bass and certainly doesn’t make your tournament competitors run for cover when told they will be competing against someone with a shaky head worm. In fact, most of us who throw shaky heads have taken a fair amount of ridicule for throwing them on the “fairy wand.” No self respecting angler likes to be compared to little girls dressing up like princesses and waving wands with glitter and feathers about.

So it is that the shaky head has gotten a bad rap in fishing circles, especially among self-proclaimed “power fishermen.” These anglers wouldn’t be caught dead with a spinning rod and 6-pound line in their boat. FLW Tour pro Andy Morgan has long been known for his prowess with a flipping stick and heavy tackle. Yet when he made the effort to be more well rounded and use a shaky head, light line and the wispy spinning rod, he went on to win $200,000 in his first FLW Tour level win on Beaver Lake.

Bassmaster Elite Series pro Jeff Kriet is another angler who is changing opinions about throwing a shaky head. In fact, he’s crediting most of his recent success to the power of his “light tackle.” What’s he done lately with it? Well he was second at Oneida in his last event of 2009 with the  Big Bite Baits Squirrel Tail rigged on a Jewel Squirrel Head. Then he followed it up at the Classic with a second place finish there in his first event of 2010. He was in the top 10 on day one at Clear Lake with every fish coming on the Squirrel Tail, a place where most of the field was hocking 2-ounce swimbaits. Then he caught every fish sight fishing at Smith Mountain on it as well. He’s currently sitting in 12th place in the Angler of the Year standings with the majority of his checks and bass coming on the shaky head with spinning tackle.

What’s his secret you ask? “I’m an old dragger,” Kriet said. “I love it when the fish get off the bank, and I can drag a worm or a jig around. I don’t really do anything special. I just drag the shaky head around until I get near something on the bottom, and then I’ll sit and shake the heck out of it.”

Obviously there is a lot more to his success with the shaky head though. And a couple points he made about how he fishes it might surprise you.

“I had the idea for the Squirrel Tail worm in my head forever,” Kriet said. “I knew what I wanted, and Big Bite Baits was so good to work with on it. At first they were like this is crazy, no one will get the shape. But it really works, obviously.”

The design is very unique with a standard finesse worm shape in the first half of the worm and a very narrow tail section that ends with an enlarged tail made up of plastic and powdered glass.”That tail always rides up and the slightest bit of current in the water makes the tail dance around,” Kriet said.

The colors are very unique to the market, with hues and shades the bass really haven’t seen a lot in finesse applications. The shape is very unique, and the action of the worm is unique. But equally unique is the head design.

Jewel Bait Company designed the head to Kriet’s specifications with a very fine wire hook, with a unique bend and a unique wire keeper. The principle behind the design was to achieve quick hook penetration without much pressure because it was going to be used with such light line.

“I get on to people all the time that fish with me about setting the hook too hard or fast,” Kriet said. “The beauty of this setup is that you just lean into them a little and start reeling, and you’ve got them.” 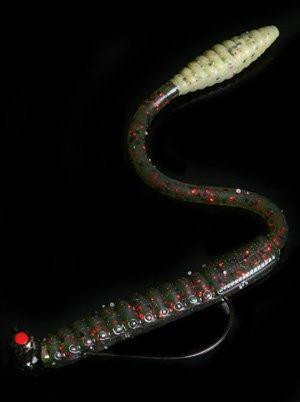 Amazingly, Kriet always starts with 6-pound line but will go “up to” 8-pound line if necessary. Most pro anglers consider 8-pound the bare minimum, and Kriet is upsizing to 8-pound. The reason is 6-pound line offers greater sensitivity and action in deeper water and part of the key to Kriet’s success is fishing the shaky head a little deeper. He readily admits he won’t get himself in a situation where the bass has all the advantages like around heavy cover or thick matted grass. But if there is some open water to fish, he’ll never be in a tournament without his shaky head on deck.

On a recent trip to Lake Lanier in Georgia, Kriet identified that the bigger post spawn spotted bass had moved out to the deeper flooded bushes, and the Squirrel Tail was catching big spots to almost 5-pounds consistently. He’d see a deep bush in 10-12 feet of water and pitch to it with the shaky head and Squirrel Tail. He would drag it slowly and shake it in and around the bushes, and the spots would pick it up so softly, he’d just see his line start to move before he knew he had a bite.

The fish were in a very delicate mood after the spawn, but the quality and consistency was amazing with his finesse approach.

“If this was a tournament, I’d catch 15 to 18 pounds a day on this setup right now,” he said later that afternoon.

Kriet also credits his tackle for much of his success. He made the switch to  Falcon Cara rods late in 2009 and he uses Hi-Seas Fluorocarbon on his reels. He feels those two factors add a lot of bites, detection of those bites and landed fish throughout the course of this season on tour.

“You wouldn’t think those things matter as much as they do, but I’m telling you they matter,” he added.

Kriet is fishing loose with a lot of confidence now. In fact you might even say his spinning rod has a few guys on the Elite Series intimidated. The old adage says to speak softly and carry a big stick, but with Kriet it’s just the opposite. He’s a big talker who loves what he does and speaks openly and honestly about everything. And he can get it done with little rod, line and lures. So to all you who have written off finesse presentations, there’s a new reason to fear the squirrel.