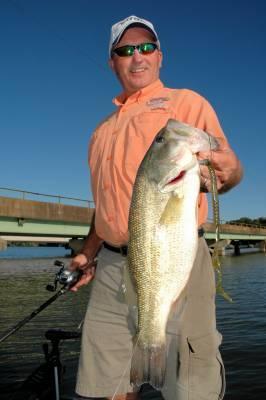 Some professional anglers are known for one thing or another. It sometimes overshadows the fact that they are pretty potent anglers with a lot of baits. Craig Powers is well known for his prowess with the Rebel Pop-R. Recently he’s more known for his line of CP Series homemade crankbaits. He learned the craft from Sonny McFarland and has his CP Series baits are the real deal.

Yet he’s done equally as much damage in fishing with soft plastics. When the fish get around the beds and then leave the beds and roam the shallows during the post spawn, Powers really comes on strong in fishing competitions. He’s got a knack for catching bass others miss with a Pop-R. But with plastics he’s kept his fishing simple and he does a great job catching them in obvious places.

1. Soft Stick bait – “If the bass are on the beds in April and May, I don’t put my boat in the water without a soft stick bait tied on,” Powers said. “I don’t think there is a more effective bait when they are up there lying around on the beds. If I know where one is laying up there, a soft stick bait is a guaranteed bite.”

2. Lizard“You have to have a lizard,” Powers said. “It’s a search bait for me. When they are in that bank grass at a lake like Eufaula, you can fish that lizard around on a light sinker and if one is around, it will absolutely bite a lizard. Once they spawn I put it away. And I only throw one color, Black with blue flake. I have two bags of them in 8-inch and 6-inch. If there are less choices to make, I seem to do better.”

3. 6-inch Shaky Head worm – “I really like a shaky head on spotted bass fisheries. But if I know where one is laying in a foot of water or guarding fry, I will skip one around a lot of bank grass, brush piles, sloping points where they will congregate. And then of course on docks on post spawn.

4. Wacky Worm – Powers also likes a wacky worm around the spawn and post spawn periods. He will opt for a 6-inch straight tail worm and rig it with a hook in the middle of the worm and twitch it in shallow water around shallow cover, overhanging trees, docks, beds and anything else he thinks will hold a bass. It can be especially deadly in clear lakes.

5. Flipping Bug – He likes a beaver-style or bug bait for Texas-rigging and flipping around shallow bushes and grass where post spawn bass like to bury up as they recuperate from their spawn. He’ll Texas rig something like an Attraxx Mystic Bug with a 1/2-ounce weight pegged to his line and put it anywhere that he thinks holds a bass.

With these five baits, Powers can cover the spectrum of shallow water bass fishing around the spawn and post spawn.