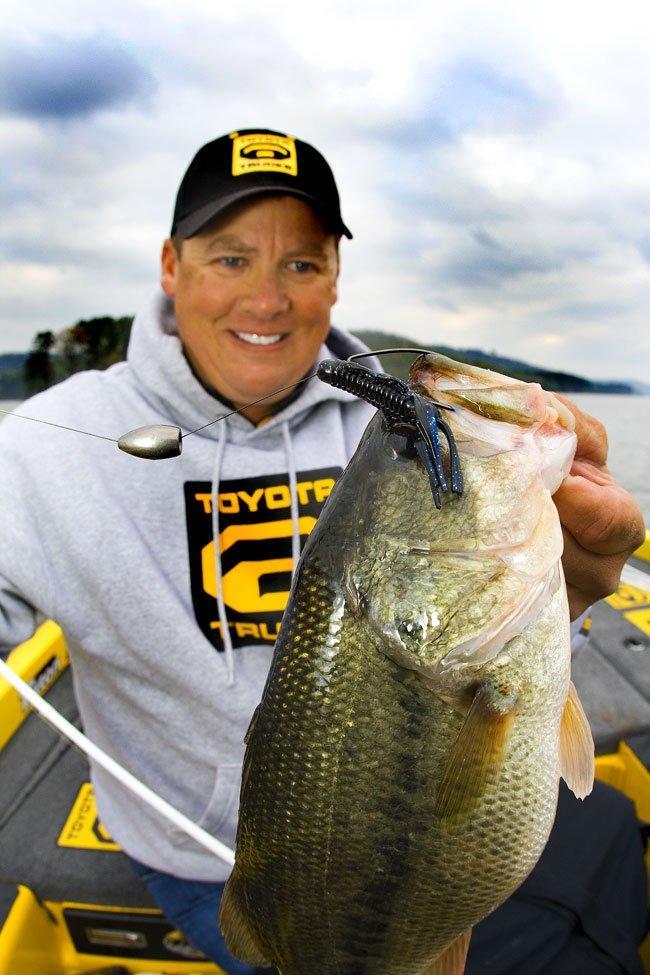 Growing up I remember watching intently as images of feeding and spawning Florida strain bass projected from old VHS tapes and onto the walls of my imagination. Shot in aquatic wonderlands throughout the sunshine state, I began to dream about one day venturing south and sampling the large, aggressive black bass beauties for myself.

While I was daydreaming, Terry Scroggins was living life to the fullest, swinging giants into the boat on an arsenal of baits of which I had yet to be introduced. Since the dawn of the information age, the evolutionary rate of bass fishing has hit an all-time high. Many baits have been ushered out and replaced with 2.0 versions, whereas others have for years and will likely permanently reside in the tackle boxes of every angler who wishes to land a lunker from one of the great Florida fisheries. For Scroggins, his top 5 lures include innovative new comers and relics alike. And they are hard to beat.

Getting its start in the 1940s, the Smithwick Devil’s Horse earned its spot as a true classic that never went out of style. Scroggins uses this double-propped bait to aggravate spawn and post-spawn fish by working it through shallow spawning flats that are littered with vegetation.

“When I am sight fishing, I always have a Devil’s Horse in my hand, casting it around while I am looking for beds,” Scroggins said. “Even if the fish doesn’t get the bait, it will usually swipe at it and show itself. When this happens you can usually follow up with a YUM Dinger and catch it.”

The color of choice for Scroggins is 310B. It has a black back, chrome sides and an orange belly.

“For some reason, Florida bass love orange,” Scroggins said. “Anything that’s got some orange on the belly seems to generate a few more bites. I try to stay away from muddy water when I throw the Devil’s Horse and whenever I am fishing in Florida for that matter. I either fish the darker, clean water or I fish in clear water.”

Flipping and pitching thick vegetation is one of the most tried and true methods for catching these temperamental giants. Many Florida bass live in the thicker vegetation year round, but if a cold front pushes through, nearly every fish in the lake will bury themselves in the thickest entanglement they can find. When this happens, you have to dig them out.

“I designed the Big Show Craw to flip heavy, dense cover,” Scroggins said. “I designed it small to get through the cover easy but also to mimic the bait. If you look under these grass mats, all the bait is small. The grass shrimp, little crawfish and bream are all small, so the small profile bait does a good job of matching the hatch.”

When the water is black or tannic, Scroggins goes with Cooter Brown which has a brown back and orange belly. In clearer water situations, he’ll pitch the craw in black blue shadow.

Since its conception, the soft plastic stickbait has become a mainstay in finicky Florida fisheries. A finesse tactic that is used to tempt the most non-aggressive fish without spooking them in the least. With apparently no action from a distance, the bait must be placed on the nose of a fish where it then reveals its tantalizing undulating action, often too much for the big girls to pass up.

“It’s a great bait to fish around the grass and a great sight fishing bait,” Scroggins said. “I also use it as a follow-up bait when I miss fish on other baits like the Devil’s Horse.”

Pitching the YUM Dinger into beds either weightless or as a light Texas rig is deadly for bedding bass. However, blind casting it down grass and reed lines is another technique that garners a lot of bites. Fishing the bait slow is crucial when you aren’t looking at the fish as is giving the line plenty of slack line to fall straight and work its magic.

Pre-spawn and post-spawn bass setup along shell beds in Florida and are often stacked in a few areas. Finding them can prove difficult, however, and that is what makes a search bait like a lipless crankbait such a key player in Scroggins tackle box.

“You can cover a lot of water with a lipless crankbait,” said Scroggins. “I like to yo-yo the Xcalibur One Knocker around these shell beds. It’s a great way to pick off these bass as they are coming and going from the spawn.”

Foxy Momma and Blue Chrome Orange are the two color patterns in the Xr50 and Xr75 that Scroggins relies on the most. If he gets into really dark water that still has a clean look to it, he’ll go with a Lemon Lime for added flash.

A Carolina rig has been used to haul bass in around the country and is likewise a stellar performer in Florida fisheries. Rigged with an ounce weight and a 4-foot leader, Scroggins uses the subtle approach to trigger strikes from bass along the shell beds that wouldn’t respond to the lipless crankbait. Trailing the rig with a YUM Houdini Worm or YUM Wooly Hawgtail proves most affective for Scroggins.

“If the water is real clean, I’ll go with a green pumpkin,” said Scroggins. “If it’s real dark, I’ll go with a junebug or redbug color. I keep my colors fairly simple down here. Over the years, I’ve learned what works in different situations, and I try to stick with what works.”

Knowing what, when and where baits work best is a great jumpstart to breaking down any fishery and can go a long way to help make the most of that long awaited voyage down south. Perhaps these tips from a legendary local will also help those fishing the grassy tannic-colored waters south of the panhandle to refine their approach. Either way, be sure to keep these 5 baits in mind the next time you’re out on the water and let us know how they treat you.