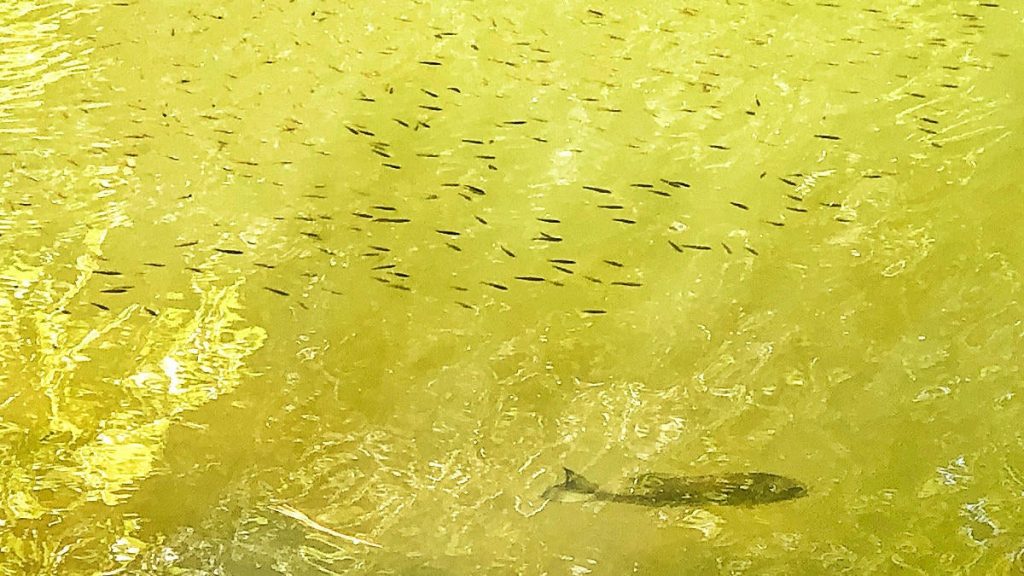 The spawn is winding down in a few areas around the country. As the first waves of bass come off bed though, several things start to happen. Shad and bluegill, two of the main forages for bass on many fisheries, begin their spawning process as well; the shad typically first and the bluegill shortly after. Both of these food sources are extremely important for bass coming off the bed as they are as exhausted and malnourished as they will likely be all year.

Prior to bass gorging on the main course of their recovery buffet, however, many will actually turn to their offspring for a bite to eat; the females in particular. In a rather bizarre turn of events, the very bass who protects her bed and her eggs will turn around and try to eat the baby bass, or fry, as soon as they hatch. The Lord’s way of combating this is to instill a protective trait into the male bass and the males will actually guard the fry for weeks after they hatch.

If you pay close attention as you’re perusing the shallows this spring, you’ll likely see this happening. The fry will ball up and hang close to cover. Bushes, dock poles, vegetation and the ends of laydowns are all great places to keep an eye out. You may just stumble on one of these little balls of fry while you’re casting your way down the bank and not see them until they scatter along the surface as your bait comes through school. Whether you see them first or not, whenever you realize this deal is going on and the bass are guarding fry, there are a handful of baits that work really well. 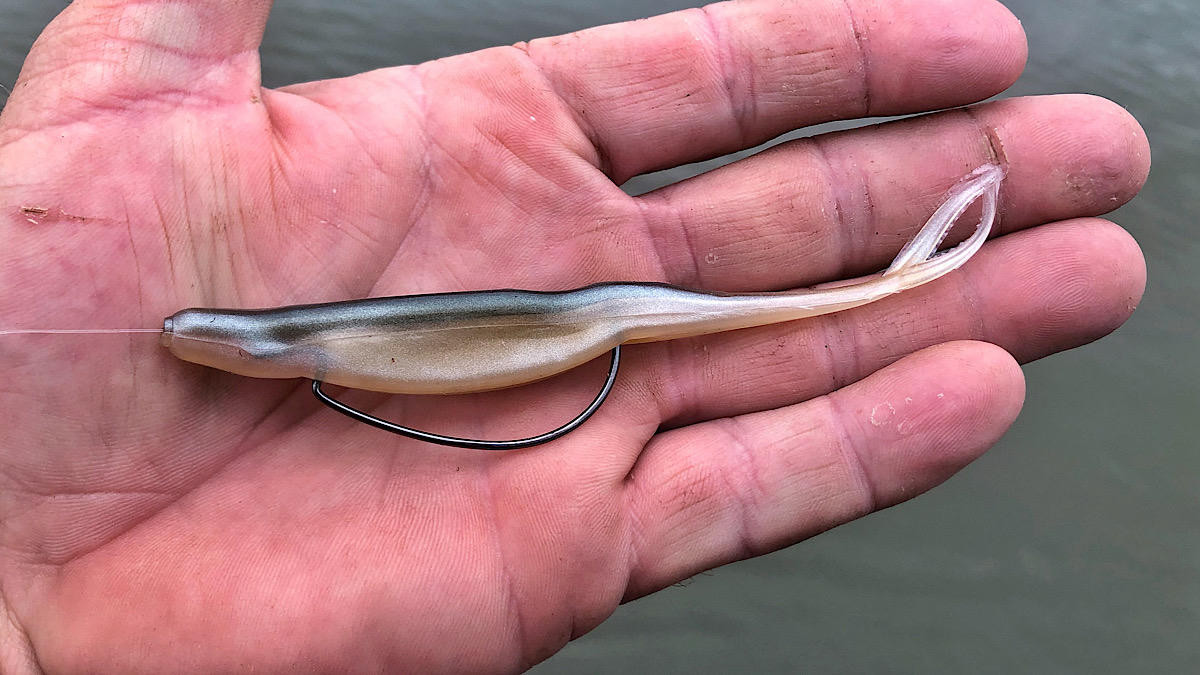 One of the gold standards as far as baits go, the Zoom Super Fluke, has likely boated a million bass by now. It’s a great bait for tricking bass that are relating to nearly any sort of baitfish. But it lends itself to fishing around fry.

It represents a threat to the fry, so it catches the attention really well of the male bass that’s guarding the fry and the female bass that’s trying to eat them. And, a Fluke has the ability to stay in their face a relatively long time.

Where other baits will sink out of sight quickly or float on the surface, a Fluke gets right in the fish’s face and just hovers there. This is important with fry guarders, who typically aren’t that interested in eating anything, they just want to run everything off. But the males see pretty quickly after a few repetitive casts that this threat isn’t going away if they simply take a swipe at it or swirl on it. The bass is going to have to eat this if it wants to eliminate the threat, so they often do.

A Fluke also does a good job of peaking the lethargic female’s interest if she’s still hanging around trying to get to the fry. The females aren’t typically super aggressive, but instead just kind of lazily float around. So aggressive power-fishing baits typically aren’t ideal in these situations. Instead, you want something like a Fluke to kind of hang in the strike zone, draw her attention but also not be too terribly threatening.

Stick worm with a tail spinner 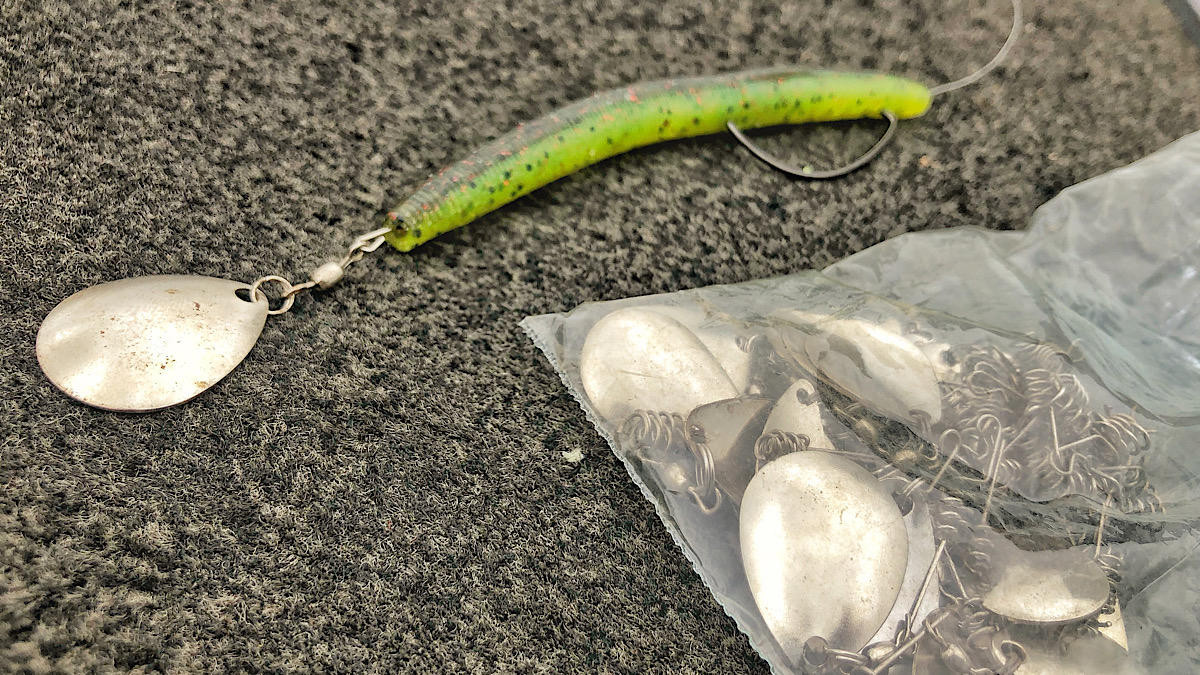 A Senko-style bait or stick worm with a tail spinner is extremely effective around fry guarders. The bait pictured here is actually a Big Bite Baits Trick Stick with a Humdinger Keith Poche Power Spinner in the back. But regardless of your preferred soft-plastic stick worm and whether you buy your tail spinners or make your own, this is a bait that excels when bass are guarding fry.

Blind casting this bait around during the latter part of the spawning process has caught my dad and me lots of fish and some big ones. One of the first fish he ever caught on it weighed about 7 pounds and came on Lake Eufaula in south Alabama. Its effectiveness obviously has something to do with that little flash of the tail. I’m guessing the females think it’s a fry that has wandered off from the school and she attempts to take full advantage of its wayward heart. But the 4/0 EWG hook we rig it with surprises her every time. It’s an effective bait too for catching the males that are guarding the fry. So again, who knows exactly why a bass does what it does. But I know for sure a bass will eat this bait really well when there are a lot of fry around.

I do want to offer up a bit of a public service announcement for this particular presentation, though. Make sure to give the fish enough time to eat the whole bait. Their focus on the flash of the tail often leads to them only getting that in their mouth to start with. So if you set the hook when you feel that first tick, you’ll typically bring back a worm and no spinner. Drop your rod on the initial bite, give it a 2- or 3-second count as painful as they may be, and then sweep into the fish. That’s your best bet of turning bites into bass with this bait. 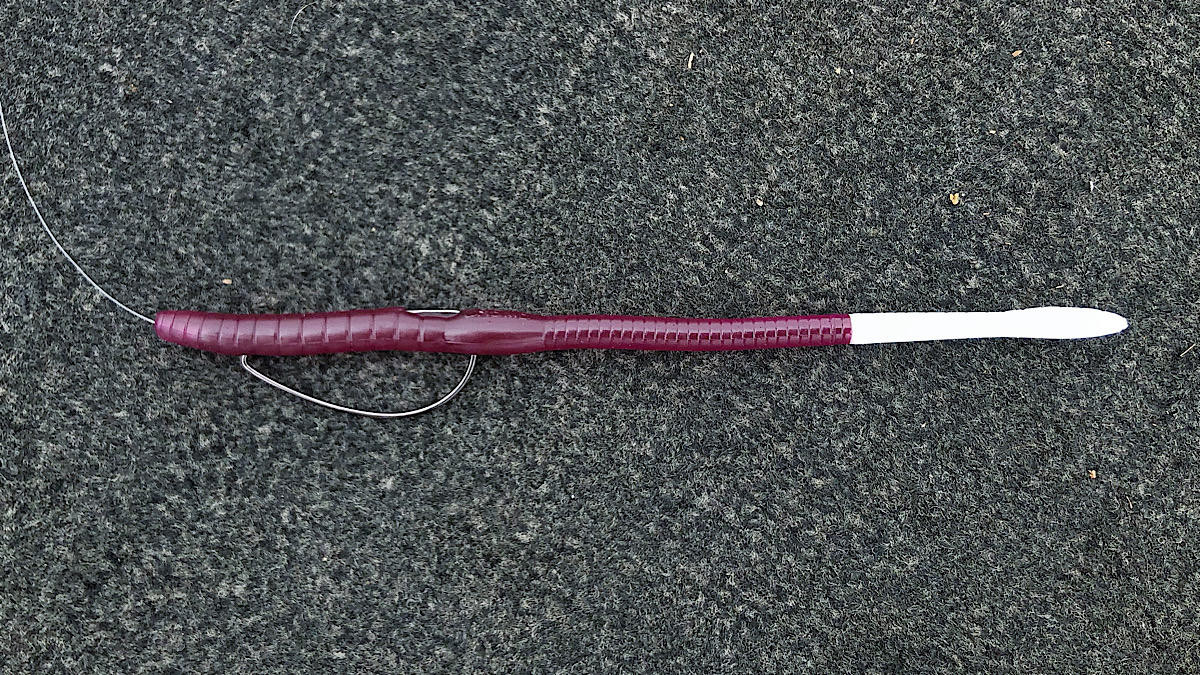 Another bait that offers a little flash on the back end and is extremely effective around fry guarders is a two-toned floating worm. A floating worm is one of the staples in the boat with my dad and me all through the spawning process and throughout most of the year for that matter. But around the spawn in particular, my dad has one in his hand 90 percent of the time as I rotate through other baits.

It’s effective around the spawn for the same reasons a Fluke is. A floating worm can be worked slowly right at or below the surface without intimidating the fish at all. But when the time comes to target fry guarders, we’ll often swap over from our straight black or bubble gum floating worms to a two-toned one with a flashy tail. Again, I think the fish focus on the tail the same way they do the stick worm/tail spinner combo. Which really gets the fish’s attention, but can lead to a lot of short strikes if you’re quick on the trigger.

This bait comes handy when there’s a little color to the water, which is quite often the case this time of year as spring rain can muddy up much of the water we like to fish quickly. So having a bait like this that complements the stick worm/tail spinner combo so well is critical. In the clearer water, we’ll stick with the stick worm. In the more stained water, we’ll typically swap over to the two-toned floating worm.

Anytime you have bass coming off the bed, begin looking for fry. Keep a keen eye out for little balls of fry as you pass through the shallows. Be watchful as your bait comes through the water so you don’t miss the wake of a hesitant bass following your bait or the scattering of fry as they clear a path. When you see these things happening, slow down and present the bass with a Fluke, two-toned floating worm or stick worm with a tail spinner and I guarantee you’ll start getting bit.