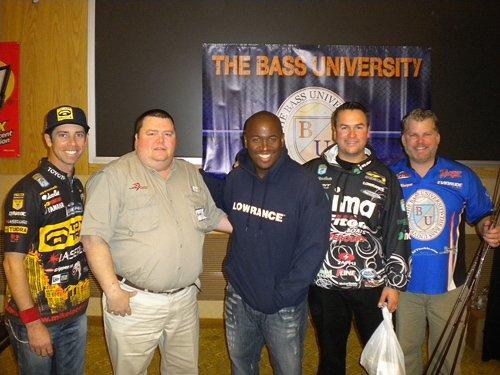 Let me start off by saying that without question I have the greatest wife in the world. No caveat’s or qualifications – Wanda Billings is hands down wife of the year for 2010.As the wife of an avid weekend angler, just like so many others across this great land, she doesn’t have it easy. So many weekends our wives sit tolerantly by as we disappear for hours and, on occasion, sometimes days at a time in our fishing pursuits. And when we are not fishing we are often talking about fishing with our buddies or reading about fishing in one of the six or seven magazines we subscribe to.
Between tournaments and trips to the nearest Bass Pro our wives patiently, and sometimes not-so-patiently, await their turn for a bit of our time while never truly understanding the affliction we suffer that takes us so far away from them even when we are by their side.I’m sure it is much easier for the wives of guys like Skeet Reese, Kevin Van Dam and Mike Iaconelli to understand the obsession we share because for them there is something of substance waiting for them at the boat. After all it is their vocation and livelihood. Our wives are not so fortunate.
They see us pour so much our time and money into obsessing over this greenish fish with seemingly little return. It is beyond their comprehension. And if we’re honest with ourselves it’s not really that attractive of a fish. Yet through our affliction-colored wide tail, pot belly, bugged out eyes and giant mouth transforms into something of such profound beauty we stare at it glassy-eyed much like we would over a Hooter’s girl long before our wives came along.

This Christmas, however, my wife earned her wife-of-the-year honors when she moved one step beyond the passive acceptance that most bass fishermen enjoy from their wives and with a simple Christmas gift took the giant leap of fully supporting and encouraging my bass fishing endeavors.

As our family gathered around the tree on Christmas morning to celebrate the birth of our Savior by exchanging gifts, Wanda sat patiently waiting to give me mine. After the children finished opening their presents, she handed me a small envelope with a bow and my name written in bright red. In Christmases past I had received the same token gifts of “acceptance” we have all received – the Largemouth Bass tie, the rubber mounted bass that sings “Rolling on the River” (Proud Mary,) – acknowledging our love for this proud fish.

As I gingerly opened the envelope, I assumed that instead searching for yet another fishing themed gift she had decided to just give me a gift card to Bass Pro or Dick’s Sporting Goods. As I took out the neatly folded piece of paper tucked inside, however, I saw I was holding something far more meaningful than a largemouth bass mailbox (which I had actually asked for by the way.)

There in my hands was a printed receipt for a gift that would likely lead to even more weekends at the lake and in tournaments and therefore more time away from home.   As I sat there looking at the printed receipt for the Dallas, Texas Bass University I was speechless. In the simplest of gestures and without saying a word she made the most profound statement while at the same time giving me the perfect Christmas gift.

For the two months that followed, Wanda enjoyed the fruits of my gratitude, and as Feb. 5th approached, my anticipation grew harder and harder to contain. The night before my departure, I could barely sleep. After seeing Wanda off to work and my two daughters off to school, I set my course for Dallas for what I expected to be a perfect weekend which would also include spending time with my close friend and owner of Lake Fork Trophy Lures, Ronnie Parker.

Often times, when we look forward to something with such expectancy, we are frequently disappointed with the outcome. Our expectations become so over-inflated that what we end up getting could never come close to meeting them. I tried my best to avoid this trap, however my enthusiasm could not be contained, and as I travelled the 601 miles from Starkville, Miss. to Dallas, my expectations ballooned to almost unrealistic proportions.

After another restless night, I finally made my way from Ronnie’s home in McKinney to the Hilton DFW Lakes where the seminar was being held. Not knowing what to expect, other than a weekend of classroom-style instruction from some of the best bass fishermen in the business, I joined about 70 of my closest friends whom I had never met, all of us hoping to garner the knowledge to be better bass fishermen and women.

What happened over the course of the next two days is almost inexpressible in words. I could write for hours about how Ish Monroe, Pete Gluszek, Fred Rhoumbanis, Pete Thliveros, Byron Velvick and Mike Iaconelli went into great detail sharing the techniques of their respective specialties, but none of that could convey all of the intangibles that made this weekend such a special experience.

Like everyone at the Dallas event, I left with a deeper understanding of bass fishing as well as the tools necessary to be a better fisherman. But the most important thing I took with me had nothing to do with fishing a shaky head or stroking a jig, and it didn’t come during any of the seminar presentations.

These six men, after fielding dozens upon dozens of questions from participants eager to squeeze the last drop of information out before the weekend ended, stuck around at the end of each session to be peppered with even more questions, comments, and photo and autograph requests rather than seek the solitude of a back room to escape the fray. It wasn’t just the chance to learn from them, it was also the chance to get to know them and interact with them one-on-one. The fact that they were so willing to spend so much extra time with their fans without a hint of pretense spoke volumes.

These are men who are fortunate enough to make a living at the sport we all love and giving their time to be a part of Bass University was about more than collecting a speaker’s fee and talking about how they fish. It was much more than that. It was glaringly obvious they were not only willing, but eager to share with us the things they do that helped make them successful. And as much as we wanted to be better anglers, they wanted us to be better anglers.

But why? Why were they so willing to engage with us at such a personal level? The answer is very simple. If you strip away the titles, championships and the paychecks one thing remains constant among these men and that is their love of fishing. It is what drives and motivates them in everything they do.

Ask yourself this question – if there was no paycheck involved, would Jeff Gordon still fire up his car and head to the track on Saturdays? If there was no paycheck would Jonathan Papelbon still head to the diamond for a pick-up game of baseball? Not very likely is it? But if you were to take away the paychecks and sponsorships from any of these men, it would not stop them. You could virtually guarantee that no matter what, after working all week for the man they would be on the water come sunrise Saturday because they simply love to fish.

For those of us who attended the Bass University, whether it was in Texas, Tennessee, Pennsylvania or California, our stories are no different. Regardless of our skill levels, how much we fish or if we fish competitively or not, each one of us were there for one uncomplicated, straightforward reason – we love to fish.   It is that common thread that unites us into a sort of brotherhood that few ever fully understand.

A long drive alone offers plenty of time to think, and as I made my way home Monday, I reflected on the weekend and how to convey to my wife the importance of the gift she had given me. We had spoken several times over the weekend but we were both distracted most of the time and had little time to really talk. My experiences at the Bass University only renewed my feelings of gratitude, and I once again began searching for ways to express it.

But apparently I wasn’t done learning yet, and it was at a small restaurant in Rayville, La. that I learned the final lesson the weekend had to teach me. Using my laptop, I connected to the internet for the first time since Friday to catch up on work and what was going on around the world. While checking my Facebook, I saw something that showed me that while Wanda may not fully understand my obsession with fishing, she thoroughly understood the significance of her gift to me and what it could lead to. Posted shortly after I left on Friday, her status comment bore a simple, humbling message: “Give a man fish, and you feed him for a day. Teach him to fish, and he’ll stay gone for days at a time.”