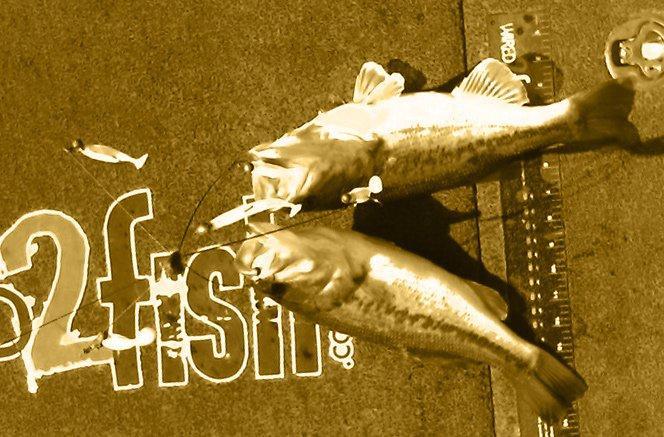 Are you sick of hearing about the Alabama Rig yet? Either way the rig is not going away. In fact, we suspect there’s going to be a lot more about it before the rumble dies down a little bit and we go about our normal lives in the bass fishing world. But since the firestorm that has exploded with Paul Elias and pretty much the majority of the top 10 anglers in the FLW Tour Open on Lake Guntersville last week, TheAlabamaRig.com has been one of the hottest fishing destinations on the internet with some reports putting it as high as 52,000 visits in just a four day span

It’s fun when a new lure or rig takes off in the fishing world. But it’s not nearly the first time there has been a storm around a bass fishing lure, technique or rig. Just a few years ago there was this crazy wobbling jig called a Chatterbait catching huge limits of bass on Lake Okeechobee. I was down there while it was unfolding, first in the Everstart Series tournament Bryan Thrift unleashed it on. Then the next week was an FLW Tour event.

Scott Martin was smart enough to stock his store with pretty much the inventory of then Rad Lure’s Chatterbait. Before the event started, his shelves were bare. Those of us that bought a bunch could have, and many probably did, sold these Chatterbaits for upwards of $150 a piece on EBay as word spread like wildfire.

Then this crazy swimbait called a Basstrix hit the market and spontaneously combusted into a wildfire when Steve Kennedy whacked a bunch of huge Clear Lake bass on those and other swimbaits. Suddenly the stocks of Basstrix swimbaits were depleted and the demand drove prices up. Some retailers demanded minimum monetary orders to even be considered for buying some of the hot swimbaits.

The Alabama Rig is already started down the same path as these two baits. A big tournament is won on the rig and now there is a long backlog to even get one in your hands. Like both of these baits before it, this rig is hand made by a small operation, and they are working night and day to try to stay somewhere in the general vicinity of the orders pouring in.

Unfortunately where we see this headed is into the dreaded dark corner of the fishing tackle industry â€“ knockoffs. Unfortunately several companies are probably already working on their versions of TAR. It’s the ugly truth that supply hardly ever meets demand in these situations, and everyone looks to capitalize on the latest and greatest.  Not to mention mass production will drive prices down.

Patents, especially design patents are great and can protect your intellectual property, but that’s if you’re willing to defend it with time and money through the legal system. Most of these companies struggle there because they are doing all they can to meet the overwhelming demand and certainly don’t have time to go to courts to defend what everyone knows they created.

The next little buzz shooting off the side of this firestorm is the legality of the rig from state to state. In Minnesota, it would be illegal per DNR laws. In Alabama, it’s completely legal. In Tennessee there is a conference meeting going on and a decision is being made as early as today on whether to allow it. There is a bit of grey area in Tennessee, as is probably the case in several states. There is a rule in the books limiting umbrella rigs for trolling to one hook if the hooks are larger than size No. 6. The umbrella rig is defined as any array of 3 lures or baits or more on one rod. But that was made for trolling.

No one ever considered casting an umbrella rig that can weigh more than 5 ounces.

Another discussion we’ve had the last several days argues whether tournament organizations are going to continue to allow the rigs in their tournaments. This is where there is a tremendous fracture of opinions from the pros, weekend anglers, industry folks and biologists we’ve talked to already. For the sake of keeping this our opinion, we won’t name any names. Again these are just topics to consider spurring some friendly conversation over what is going on here with this new rig.

On the one hand, folks are excited about what the rig has done thus far. A BFL Regional was won the week before on it. Now a major professional bass fishing tournament has been won on it. In both cases, the talk before the tournament was how tough the fishing would be. At Guntersville, many of the top pros thought going into the event that 12-14 pounds a day would be good. Then the winner averages 25 pounds a day. Guys go from catching 11 pounds on the first day to catching 20-plus-pound stringers the last two days.

That excitement around tournaments can be hard to come by at times. However, what will be the opportunity cost? What are we giving up as a tournament fishing community by doing this? Some have argued that the sport of it goes away when guys can throw as many as they want and just seine the bass off of locations. It’s not quite that simple though. You’re not going to just tie one on and all of the sudden catch loads of bass everywhere you cast it.

It’s a situational bait. Our theory, and many of the pros have backed us up on this, is that the bigger bass are suspending off of shallow areas and breaks on a lot of fisheries where it’s working. These bass are ordinarily hard to catch because they don’t respond well to “one lure” coming through that suspended area. They have been conditioned through pressure and catches to avoid those single lures in their suspended zone. However it’s almost like those fish that are programmed not to chase that one bait, accept that the Alabama rig is a school of baitfish. It’s like it removes their inhibitions because there is no way that many fake lures can be coming by at one time.

Trolling was removed from tournament bass fishing long ago. We’ve often said the same should be done for walleye. Live bait as well. But that’s a topic for another day. But the essence of the removal of trolling was to pit skilled anglers against the bass with nothing but one bait and line between them. Not just riding around until they happened onto a group of willing fish. It forced guys to lock onto spots more, run patterns more and develop casting abilities to reach places others missed.

It takes determination to cast TAR all day with five 3/4-ounce jigheads, swimbait bodies, and the rig hanging at the end of your line. The baits weigh more than 4 ounces together, the rig weighs 3/8 ounce. Just getting it out there is a chore. Then doing that hundreds of times throughout the day is like chopping wood for 8 hours. That is a test of conditioning and skill in and of itself.

And it’s not going to work everywhere in all situations. One angler had an astute observation today that he shared.

“I’m sure the buzzbait caught a sick amount of bass when it first hit the scene,” he said. “Guys were probably mopping up the fisheries with it and just pillaging all the bass around for a time. But eventually the fish got somewhat conditioned and it’s not nearly as easy to fool them on a buzzbait as I’m sure it once was.”

So how long will this be THE WAY to catch them? Who knows. As soon as other methods out produce it when a bunch of the field was employing it will be unique to see. That may signal the fire is finally under control.

The final problem that often comes with rigs that work so well like this for a time is you’ve given folks a better tool to rape and pillage fisheries, especially those who would poach. We can remember seeing videos of some guys piling up bass and filleting them in sickening amounts on fisheries like Guntersville, Falcon and Amistad. We hate to think a rig that has had so much great positive energy for the sport right now would go that direction, but it’s fair to at least consider it.

What we did see as a spark of positive energy for the tackle industry is that you’ve got to buy an awful lot of baits to keep that thing rigged right and running true. Elias was going through the shad tails, other anglers reported catching 50 or more keepers a day on it when they thought 12 pounds was going to be good in practice.

One angler told me today, “Jason, if I had tested it and thrown it in practice and figured it out earlier, I guarantee I would have had 100 pounds for four days. It made that big of a difference.”

Strong testimony for the hottest rig going in bass fishing.

We hope Andy Poss gets his just deserve in this whole process and that we’re privy to another great situational tool, in this case bass suspending around shad, for a while to come. Hopefully no one will make snap and rash judgments, and we can all enjoy fishing as we always have with new lures and techniques while they’re hot without fear of damaging our fisheries or our sport’s great integrity.