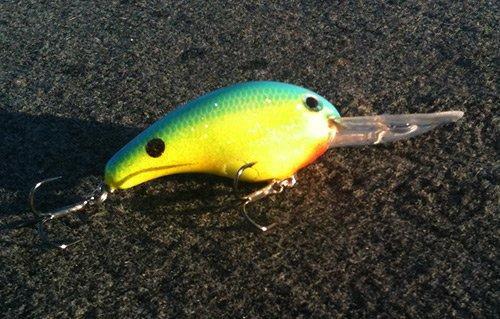 Every good lure has a story. FLW Outdoors Magazine ran an interesting piece years ago about some “Warrior Baits” of the pros. These baits only got pulled out when money was on the line. The baits had been tattered, beaten and bruised and most pros, believed the baits actually caught bass better after being tattered.

I actually have a good friend, John Prior, that paints baits on the side and he’s extremely talented. He saw that same trend and actually started creating original paint jobs that mimicked a bait that had had the paint chipped off of it. It was like buying a pair of designer jeans that had already been ripped torn and tattered when I was in high school.

This weekend I shared a boat with Mark Menendez, fishing on the Cumberland River. We had a ball tossing crankbaits to willing bass down the river. We threw several different Strike King crankbaits. The new KVD 2.5 and 1.5, and the old standby Strike King Pro Model Series 3 in Sexy Shad were producing.

But one crankbait was laying on the deck,  and it looked like it had a story. It was a bright green back with chartreuse sides and the kill spot was back by the tail. It was custom painted. Menendez picked it up and started to tell the story.

“Does that bait look familiar?” Menendez asked. “I caught that bait. We were at Conroe for the TTBC, so immediately I’m thinking I caught one of Kevin’s  [Van Dam]  crankbaits. I went over and asked Kevin if he lost any crankbaits. He asked if I caught a 6XD in a brush pile in Sexy Shad color. I told him it was a lime and chartreuse custom painted 5XD. He confirmed it wasn’t his.

“I knew Keith Combs had some also, and that Tim Reneau custom painted some baits for him. I asked Keith if he lost any custom painted 5XDs that day.”

Menendez refused to give the bait back that was obviously producing for Combs  — a  little friendly psychological battle between competitors. Combs  was alright because he was having more overnighted to him at the hotel. After letting him sweat it out, Menendez told Combs he could have the bait if he truly needed it for the next day. Combs had more baits and was fine with it.

More proof that every good bait has a story.