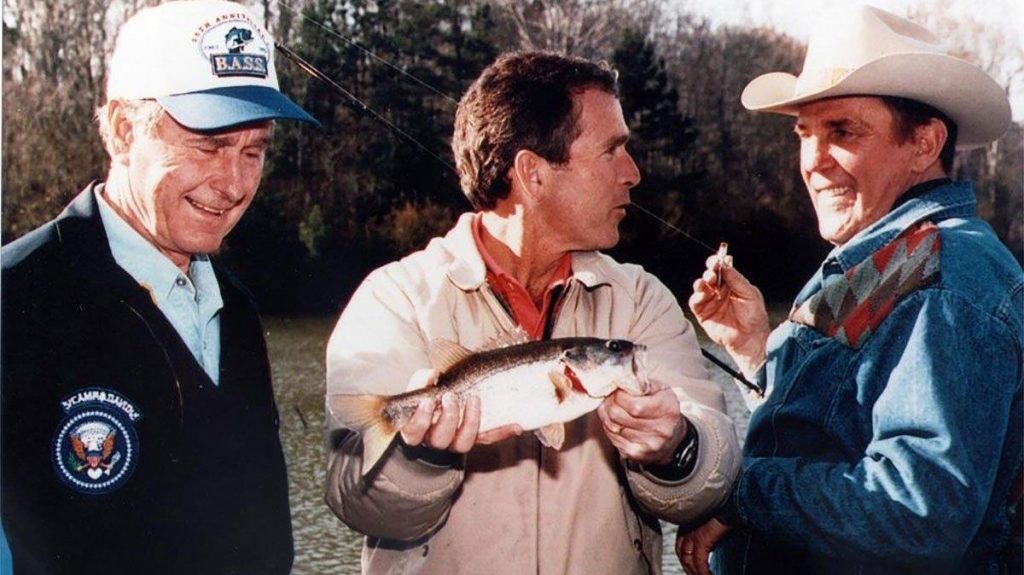 It is a “sportsman’s paradise.” Presidents have fished its fertile lakes, and in 2010 Outdoor Life named its 55-acre fishery the best bass lake in America.

The estate known as Legacy Lakes is the creation of outdoor icon Ray Scott, founder of the Bass Anglers Sportsman Society (B.A.S.S.) and the Whitetail Institute of North America.

Jason Walter, CEO of National Land Realty headquartered in Greenville, S.C., recently announced his company has signed a contract with the well-known outdoorsman and conservationist.

Although the full- service land brokerage company specializes in properties of all kinds, including timberland, farm land, hunting estates, plantations and high-dollar ranches, he says this is one of the most unique of all.

“To say it is one-of-a-kind is an understatement,” he says, “considering Ray Scott is the godfather of modern bass fishing and widely recognized for his work in conservation and boating safety. We’ve never had such a unique turn-key property.” 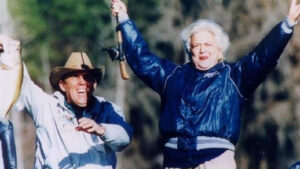 The lake claims a lot of history as a fishing hole. It’s been fished by two presidents — George H.W. Bush and George W. Bush ¾ on multiple occasions as well as by First Lady Barbara Bush. Many of the country’s top fishing pros have wet a line there along with celebrities ranging from Jett Williams (daughter of Hank Jr.) to aviation legend Chuck Yeager

Scott finished developing the property in 1986, when he and his wife moved into the recently finished house, but he bought the land much earlier, when he recognized the potential of the rolling acreage in the historic hamlet of Pintlala, about 15 miles south of Montgomery. There is nothing that the godfather of bass fishing likes better than to design bass fishing lakes for both the fish and the fisherman.

“You have to understand the psychology of both” he says with a smile. According to Scott, that understanding was the basis for his success with B.A.S.S., which under his leadership claimed more than half a million members.

With that perspective, it was not surprising that Scott couldn’t resist building two more fishing holes just down the road along his driveway ¾ one a 14-acre impoundment that contains only female Florida bass and plenty of forage. 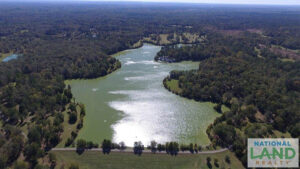 “All these fish have to do “says Scott “is eat and get fat. And they enjoy every kind of bass structure known to man. But don’t kid yourself! They can still be a challenge to catch. That’s why bass fishing is a true sport.”

Jerry Joe Ingram of National Land Realty is broker for the property, and as an outdoorsman he appreciates its recreational value. But he is equally impressed with Scott’s creative sensibilities.

“You can tell every aspect of the estate has been thought out,” he says. “Ray designed the house to sit on a peninsula close to the water so every room has an intimate view of the lake. When you sit in a rocker on the front veranda you have a 180-degree view of the water. You can watch blue herons, geese, ducks and deer stepping out on the banks across the way.”

The main house is about 5,000 square feet in a style Scott calls “rustic elegance.” The great room is dominated by a massive fieldstone fireplace and whitetail chandelier personally commissioned by Scott.

The nearby boat house has a spacious upstairs loft area that the Secret Service and President George H.W. Bush used when he came to visit on multiple occasions. A nearby winding path leads to the rustic two-bedroom guest cabin steps where both Presidents Bush have stayed. 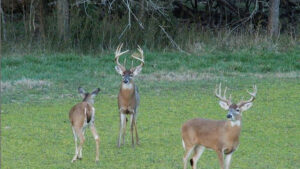 Bass are not the only animals featured on the Ray Scott Legacy Lakes property. Whitetail deer also share the spotlight in an 80-acre high-fenced enclosure. As founder and president of the Whitetail Institute of North America, Scott has long had a fascination for deer nutrition and management.

Years ago he imported Canadian-genetics whitetail for the enclosure, mainly for research. “I brought them out of Canada as fawns. We’ve got some magnificent creatures now thanks to good management and good groceries from the Institute.”

“It’s tough to leave” says Scott. “But I won’t be far away. I’ll be across the hill on a secluded side of the property in a small cottage on an old 16- acre lake. It’s perfect for me, my wife and our three dogs. I only hope that the next owner will enjoy the estate as much as we have.”