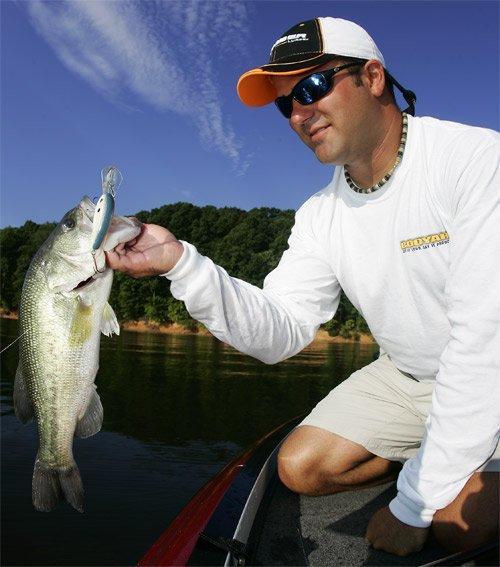 When I was a kid, we collected baseball cards, and of course, the hot ticket was figuring out in his rookie year, which guy was going to be a legend in the sport. Saving a card and not trading it on the chance that player might turn into a dominant all-star was a guessing game.   But knowing that card was worth something added drama at age 7. So it’s always fun to look at the new guys coming into the big leagues in a sport and speculate whether they will be one of those big names.

One of the rookies we’ll be watching this year on the Bassmaster Elite Series is Ben Parker from Springville, Tenn. I fished with Parker last summer and knew then he was going to be on to bigger and better things in fishing soon. He’s made his name fishing around Kentucky Lake, and is widely regarded as an expert with the Humminbird Side Imaging on the Tennessee River.

Last summer and fall he took his prowess with the electronics on the road fishing the Bassmaster Northern Opens. He finished 10th in his very first Open tournament at Chesapeake Bay, a fishery he’d never seen before. Then followed it up with a 30th place showing at the Detroit River, another place he’d never fished before.

He ended the Open season 10th in the points standings in the Northern Division and got his Elite invite shortly thereafter.

Now he’s getting the details in order for his first season as an Elite Series pro.

“I’m excited,” Parker said “I’ve been pretty busy with my duck hunting business. It’s really craziest during the holidays because everyone is on vacation. So I’m finally sitting down and planning my calendar and working on getting some sponsorship deals solidified.”

Parker has been busy talking with a new boat manufacturer and his long-time bait sponsor.

“I have a lot to do and I honestly don’t quite have my head wrapped around every little thing there is to get done before the season starts,” Parker said. “I just talked with Gary Clouse at Phoenix boats and they are building me a boat as we speak. I got to tour their plant and that was a really cool experience. Their boats have a real East Tennessee flavor. You see some Allison or Bullet type styling with the quality and solid construction of a top manufacturer. They pay attention to the small details and really take their time on each boat. Wiring is critical to my success and I was impressed with how they handle details like that.”

His Phoenix will be wrapped at least in part with one or several of the PRADCO brands. He wasn’t sure when we talked if he would run a Bomber, Yum, or other wrap for them. Another part of the wrap will feature his guide business, Parker’s Outfitting.

He’s also working on securing a truck deal as he knows travelling all over the country for the Elite Series will take a toll on a tow vehicle.

But he’s extremely excited about the variation in the schedule.

“All the fisheries are really cool. I’m not really that nervous. I’m actually excited. Sometimes when I go to a new lake, I do really well. Because I really put in the work to find the fish. That’s where the thrill in fishing for me is. Finding the fish and knowing you found the right ones in a vast fishery.”

Parker plans to room with Tim Horton as they travel next year. He’s hoping Tim will help him avoid too many rookie mistakes.

“He doesn’t have to help me with the fishing part, but hopefully he’ll mentor me with signing up for the right stuff, and attending certain functions, etc. More of the business side of fishing.”

Parker hasn’t ever fished West Point, Arkansas River or Toledo Bend and he’s only been on Wheeler once. He’s not fished the Florida chains either. But the diversity is what he likes.

“Offshore is my strength, but I also like places with a lot of different things going on. On this schedule, we’ll fish rivers, black water in Florida, offshore, blue back herring lakes and big impoundments. I’m really looking forward to it.”

One thing that Parker is nervous about adjusting to is the practice schedule. He’s a workaholic when it comes to his fishing, sometimes spending entire 12-hour days scanning with side imaging on miles of offshore structure looking for one sweet spot. He’s spent a week before preparing for tournaments, and now he’ll have just barely 2 1/2 days to scan and learn a lake.

But if his Open performances are any indication of his work ethic on foreign fisheries, the adjustments should come with time.

As far as his other plans, now that he’s a full-time Elite Series pro, he’s still trying to figure that out.

“I’ve got to plug my dates into the calendar and figure out when I can guide,” he said. “I will probably focus more on electronics teaching trips than as many fishing trips. I really enjoy those more because I feel like the guy comes away from that trip with something usable he can take anywhere and fish better. They were really popular with anglers last year. Then after that I’m considering fishing the Northern Opens again because I had so much fun last year. Erie is so incredible.”

So he’s a young guy, with a passion and the necessary skill set to be successful. Now if he can put the fishing and business side together and keep his cool under the pressure cooker of the Elite Series competition, he could someday find himself at the top of the game.

I for one will pick up his rookie card and keep it with some of my old baseball cards just in case!