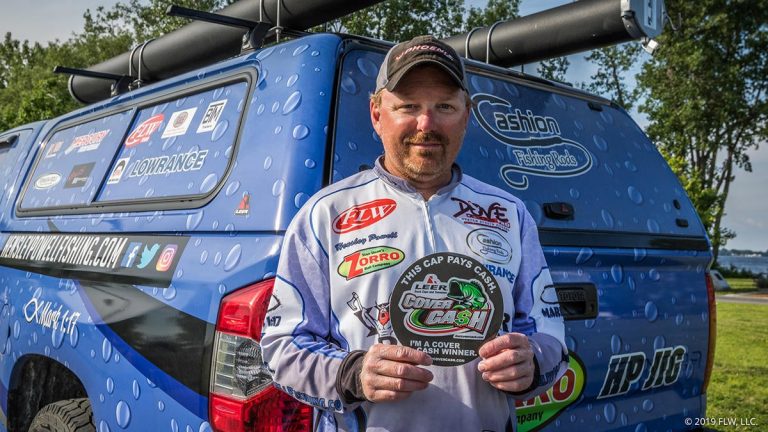 FLW Tour rookie Hensley Powell cashed an extra $500 check for his 5th place finish at Lake Champlain thanks to being the highest placing LEER Cover Cash participant in the final event of the 2019 FLW Tour regular season.

The Tennessee native exploited one primary spot just south of Fort Ticonderoga to catch 73-lbs and 12-ounces over the four-day event. Powell located the area early one morning during official practice due to spawning alewives and knew he had found something special. Ultimately the baitfish weren’t as active during competition days, but the bass certainly were.

Powell mostly relied a 3/8-ounce Z-Man Evergreen Chatterbait Jack Hammer to catch both largemouth and smallmouth bass from his area. The FLW Tour rookie noted his stop-and-go retrieve was crucial. As nearly every single fish he caught ate his lure as he stopped reeling and let the Chatterbait slowly flutter to the bottom, mimicking an injured alewife.

While Powell missed the upcoming FLW Cup on Lake Hamilton in Arkansas this year, his 5th place finish on Lake Champlain gave him the positive feedback he was looking for and some momentum going into next year.

“This year served as a big time learning curve for me,” Powell admitted. “I fished two divisions of the FLW Costa Series last year to qualify for the Tour and was fortunate enough to do well in both. But there were definitely a lot of differences between doing that, and fishing against the guys on the FLW Tour this year. I learned a lot and I’m really looking forward to 2020.”

Powell bought his LEER 100XL truck cap just before the 2019 Tour season began. He had never owned a truck cap before but his experience traveling and fishing the Costa Series events in 2018 convinced him it was time for a cap.

“Last year I would store all my fishing gear in my truck cab at nights while on the road,” Powell said. “That became exhausting and I knew I needed to get a truck cap when I qualified to fish the FLW Tour. I liked the look of LEER’s products and I had heard about the Cover Cash program, so it was an easy decision. It’s amazing to me more anglers don’t take advantage of contingency programs like LEER Cover Cash. They’re missing out!”

When asked what he’d spend his $500 of bonus money on, Powell quickly responded with FLW Tour expenses for his sophomore season. He is ready to come out swinging in 2020.

Whether you fish professionally like Hensley, or you compete regionally/ locally you can still take advantage of LEER’s Cover Cash program. As long as you own a LEER truck cap or tonneau cover the program is FREE to join, and you’ll be eligible for payouts in over 200 bass and walleye fishing tournaments. You don’t need to win an event to get paid either; you just have to be the highest finishing registered program participant.