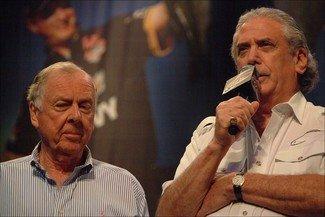 One of America’s richest men is on board with tournament fishing in a big way. T. Boone Pickens announced his partnership with Irwin Jacobs of FLW Outdoors today at the Forrest Wood Cup on Lake Lanier. Irwin Jacobs, Owner of FLW Outdoors, invited Pickens on stage and the two talked briefly about how the partnership came about.

“We’ve been friends for several decades, and we were on his ranch a month ago,” Jacobs said. “We were fishing. He asked me about what we’re doing with FLW Outdoors so I told him about how we want to get kids involved more and college fishing and our pros. And he said to me, ‘Irwin that is amazing! How can I get involved with that?’

“He asked if he could be a partner in it. We shook hands right there and we made a partnership. And I’m happy to announce, T. Boone Pickens is partner with me in FLW Outdoors.”

“When we talked about this on my ranch, we talked for a while because we were catching a lot of fish that day, and we were catching some nice fish and that made our talk a little longer,” Pickens said. “I come from a fishing family. We fly fished all the time.

“This is America today. Over here walking around [the Forrest Wood Cup expo] with all of you. I come from a small town in Eastern Oklahoma. I’ve been very touched by what I saw today and who’s here. Can I add to today’s purse. Bring it up from $500,000 to $600,000.

“Boone you can spend your money however you like,” Jacobs said. “But on behalf of those six pros and all of us we thank you. There is a lot to look forward to.”

The oil and gas tycoon and now born-again environmentalist pushing for less support on foreign oil is an avid outdoorsman, owning a 65,000-acre ranch that is reportedly full of big fish on private lakes and big deer and other game that he enjoys hunting.

The news was a shot in the arm to the whole fishing industry, but most importantly FLW Outdoors who quite frankly took a lot of undeserved criticism for the reaction by sponsors to a tough economy by pulling out last year. Walmart is back with bigger than ever before and bringing a host of vendor sponsor support.

But back to today’s announcement, who is T.Boone Pickens some folks might be asking. Pickens graduated from Oklahoma State in 1951 with a degree in geology. He worked briefly for Phillips Petroleum for three years. In 1954 with a $2,500 loan, Pickens and two investors founded Petroleum Exploration, Inc. That business focused on domestic oil and gas deposits. He later founded Altair Oil & Gas Inc to pursue western Canadian oil and gas reserves.

Both of these were precursors to his company Mesa Petroleum, which went public in 1964. Mesa would go on to become one of the largest independent natural gas and oil companies in America, producing more than 3 trillion cubic feet of gas and 150 million barrels of oil in a span of 33 years.

In recent years, he’s become an avid environmentalist focusing on preserving the rich natural heritage in America, namely fishing and hunting. His Pickens Plan is a call to arms to break America of its dependency on foreign oil by focusing on wind farms, natural gas and nuclear energy while combating global warming.

To give fishing fans an idea what Pickens can do, he gave OSU a $165 million investment into the schools athletics programs in 2006. Then in 2008, he again donated $100 million towards endowed chairs and professorships at the institution. It was the largest gift for academic purposes in the state of Oklahoma’s history. All told he’s donated more than $400 million to his alma mater.