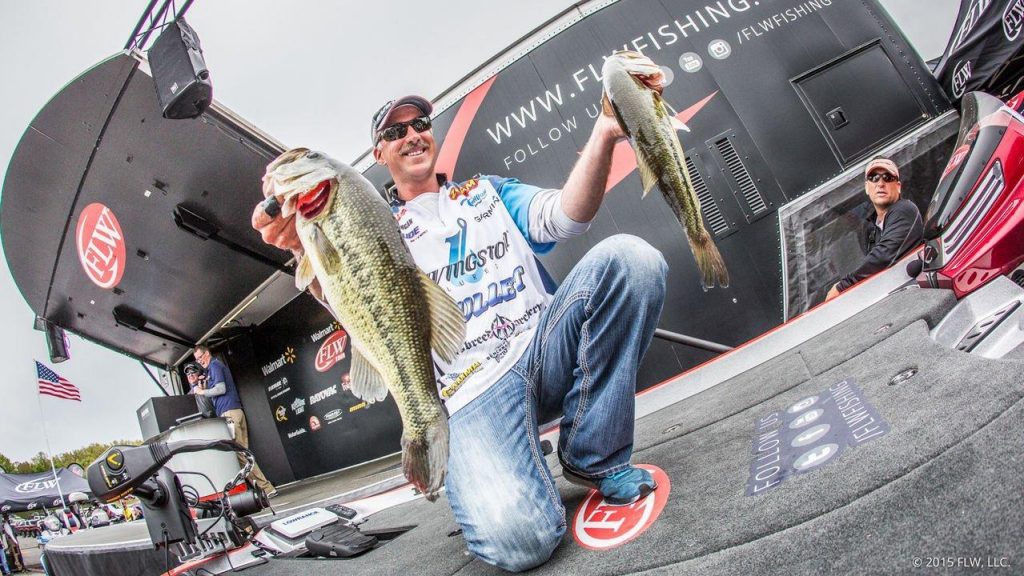 The weather threw anglers another curveball Friday morning at the Walmart FLW Tour at Beaver Lake presented by Rayovac. After cold and wind greeted anglers on Thursday, heavy rainfall and lightning was the story today, prompting FLW Tournament Director Bill Taylor to delay takeoff 45 minutes due to the lightning and low visibility.

After the morning storm passed, 154 anglers embarked on day two of the four-day competition. After starting the day in 15th place, pro Andy Morgan of Dayton, Tenn., brought a five-bass limit to the scale weighing 15 pounds, 7 ounces to vault to the top of the leaderboard in the competition, hosted by the Rogers Convention and Visitors Bureau, that features the best bass-fishing anglers in the world competing for a top cash award of up to $125,000.

“I caught my fifth fish on my very last cast of the day,” said Morgan, the reigning back-to-back FLW Tour Angler of the Year winner. “The rain delay this morning hurt me bad because I was in the first flight to check in today. It was storming and nasty, but the fish were biting.

“I’m mostly spawn fishing and looking for bedders,” Morgan continued. “All of the fish that I had marked are gone, though. I came in with around 15 marked. I caught 10 keepers yesterday and five today, so I’m going to have to start from scratch (tomorrow).”

The top 20 pros that made the Buck Knives Cut and will fish Saturday on Beaver Lake are:

Nixon won the Bridgford Big Bass Award on the pro side Friday with a bass weighing 4 pounds, 10 ounces to win the $500 prize.

Pro Drew Benton of Panama City, Fla., has his day one weight disqualified from the tournament Friday for violating FLW Tour rule No. 13, which contains provisions regarding permitted fishing locations. FLW officials were made aware that Benton fished within 50 feet of a marked No Fishing Zone in a commercial marina on Thursday. Benton caught two bass for 3 pounds, 8 ounces Friday and finished in 153rd place.

Walmart pro Mark Rose of West Memphis, Arkansas, and co-angler Nick Loeffelman Jr., of Valles Mines, Missouri had their day two weights disqualified, also for violation of rule No. 13. After mechanical failure both Rose and Loeffelman left the boat, leaving it unattended and violating the rule regarding abandoning a boat and leaving it adrift without proper tie-off or anchoring after a mechanical failure.

T-H Marine’s Luke Dunkin of Lawrenceburg, Tenn., won the co-angler division and $20,000 Friday with a two-day total of 10 bass weighing 18 pounds, 2 ounces, followed by Todd Lee of Jasper, Alabama, who finished in second place for the second consecutive tournament with 10 bass weighing 17 pounds, 15 ounces worth $7,500.

“It’s hard to describe my feeling right now,” said Dunkin, who earned his first win as a co-angler on the Walmart FLW Tour. “I have a bunch of friends and family calling and texting me right now with so many messages. This is awesome.”