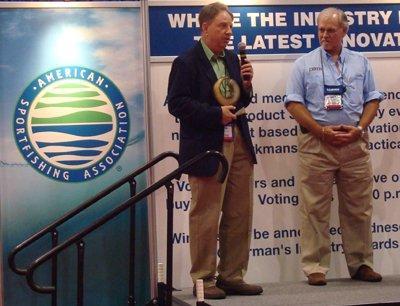 The POMA/ASA Homer Circle Fishing Communicator Award recognizes a journalist who exemplifies the spirit, dedication to fishing, extraordinary talent, and commitment to mentoring the next generation of sportfishing communicators as displayed by Homer Circle during his storied career.

The award was presented during the New Product Showcase, the flagship feature of the International Convention of Allied Sportfishing Trades, better known as ICAST.

“We are very proud of Robert’s achievement,” said Teeg Stouffer, Recycled Fish Executive Director. “It was an honor to be there and see him receive the award, but it is an equal honor to be able to work with him to engage, educate and equip anglers to live a Lifestyle of Stewardship through our cause.”

A graduate of the University of Missouri’s School of Journalism, Montgomery is a teacher by natural disposition. He started in the business by writing magazine articles while working as a high school English and journalism teacher. He continued teaching, to a much larger audience, when he became Bassmaster magazine’s first and, so far, only conservation writer in 1985.

“To receive an award named for Homer Circle, a legendary outdoor journalist, whom I grew up reading and, yes, even idolizing, is humbling, to say the least,” said Montgomery. “In this industry, no man is more respected and beloved than the man whom many of us affectionately call, Uncle Homer. It’s an honor to have my name linked with his.”

Montgomery further said, “For a kid who grew up devouring stories about fishing and spending all my money from my part-time job on fishing lures, this honor is a dream come true.”

While Montgomery crafts how-to and where-to fishing articles for many publications, his passion always has been in being an advocate for the resource and in encouraging participation. He believes that if more people fished, the world would be a much better place.

“This award recognizes the important role outdoor communicators play in educating and informing the public about fishing, boating and conservation. We applaud the talent and professionalism of such an outstanding journalist in that arena. Robert has a clear and insightful contemporary voice and is well deserving of this recognition,” said Chris Chaffin, president, Chaffin Communications, and POMA’s board of directors Chairman.

“Robert has been a strong advocate for conserving our nation’s fisheries and for ensuring that all anglers, novice and avid alike, become more knowledgeable about the issues facing recreational fishing,” added ASA President and CEO Mike Nussman. “This is a well-deserved honor.”

Today, Montgomery writes mostly for BASS Times and Bassmaster, as well as Stratos, an in-flight publication. He is also the author of “Better Bass Fishing,” published by Countryman Press.

Montgomery’s role on the Recycled Fish Board of Directors involves steering the organization’s message and direction, crafting communication pieces, and providing oversight from his experience in the fishing industry and as an outdoor communicator.

Homer Circle Award nominees are not required to be affiliated with POMA or a communicator’s organization. The award is presented as deemed appropriate, not necessarily annually, during ICAST. Montgomery is the second person to have been presented the award.