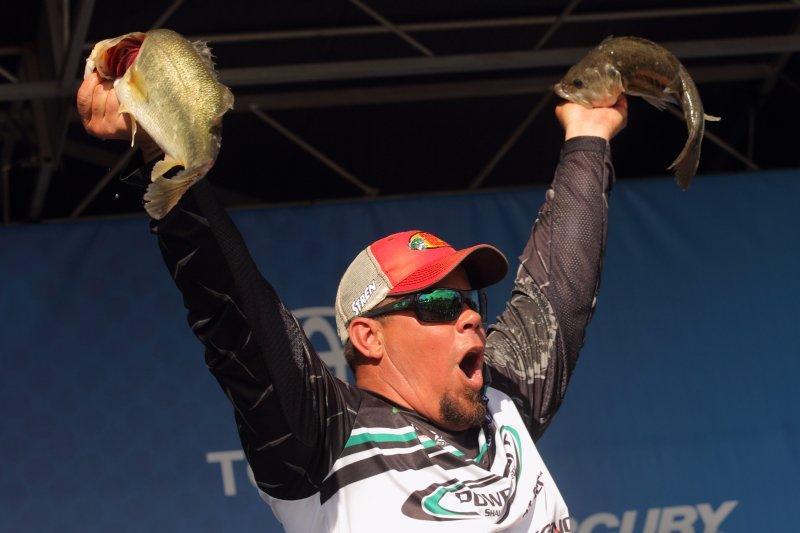 He was going to make a lengthy run upriver to the grassy canals and ditches where he had caught the majority of his fish during the first three days of the Bassmaster Elite at Sabine River presented by STARK Cultural Venues. But if the fish were no longer biting there due to the heavy rains that fell across the region Saturday, he was going back downriver to win or lose the event on the main body of the Sabine.

He stuck to the plan, bailing on the suddenly unproductive areas upriver around 12:30 p.m. and traveling back to the Sabine to finish a five-bass limit that weighed 10 pounds, 6 ounces. The weight gave him a four-day mark of 50-0, earning him his seventh victory on the Bassmaster Tournament Trail and a winner’s check for $100,000.

Lane is the first angler to lead all four days of an Elite Series event since Brandon Palaniuk did it on the St. Lawrence River in 2013.

“I just kept wondering if the water was clear up there where I had been catching them,” Lane said. “I ran all the way up there, and all I caught were two keepers and a bunch of short fish. I finally just decided that I couldn’t make those fish bite, and I wasn’t going to lose the tournament right there.”

The run back downriver produced three bass that helped Lane fill his five-fish limit and one more that allowed him to cull for added weight.

“Experience really gave me a confident attitude about coming back downriver,” Lane said. “I caught two fish down here on back-to-back casts late Saturday, and I knew there were fish here. That was a real confidence builder.”

The decision to change locations was one of several good ones made by Lane during a week he owned from start to finish.

He targeted shallow spawning fish most of the week and caught the majority of his weight on a new plastic bait called a “Live-Motion Drop Dead Craw” from Luck-E-Strike. It’s so new, in fact, that he only had about 25 to last the entire week.

“When you’re catching five or six nonkeepers and you go through four or five baits, you have to make a decision,” Lane said. “You have to decide if you want to just keep using them until they’re all gone or save some for later in the week. I ended up having just enough.”

As the week drug on, Lane said he put added pressure on himself to pull off the rare wire-to-wire victory.

“With a 2-pound lead going into today on a place like this — where I knew 10 pounds would probably carry me in — I wanted to put pressure on myself,” Lane said. “I didn’t want to go out there and just think I was going to catch them or just give it away because it was muddy. I wanted to finish the deal.”

With other anglers from the top of the leaderboard fading on the final day, Lane’s closest competition came from Mike McClelland. The Arkansas pro, who started Sunday in fourth place, caught 13-1 and finished the event in second with 46-0.

He caught his fish by making a 228-mile boat run, round-trip, to Galveston Bay and back each day. He burned 80 gallons of gas per day and arrived back at the City of Orange Boat Ramp on Saturday with only four seconds to spare.

“The fastest I could make the run was two hours,” McClelland said. “On Saturday when it was so rough, it took me two hours, 47 minutes. It was absolutely brutal. That was the day I made it back with four seconds to spare after running 114 miles.”

Aaron Martens, who entered Sunday in second place, managed only four bass that weighed 6-15 and finished third with 44-8. He used a pattern very similar to Lane’s for most of the week, targeting shallow spawning fish in narrow, grass-lined ditches and canals.

“I had my fifth fish on about eight times, but I never put it in the boat,” Martens said. “I probably had more than 20 bites. It was really frustrating, but this is a great fishery that’s going to keep getting better and better.”