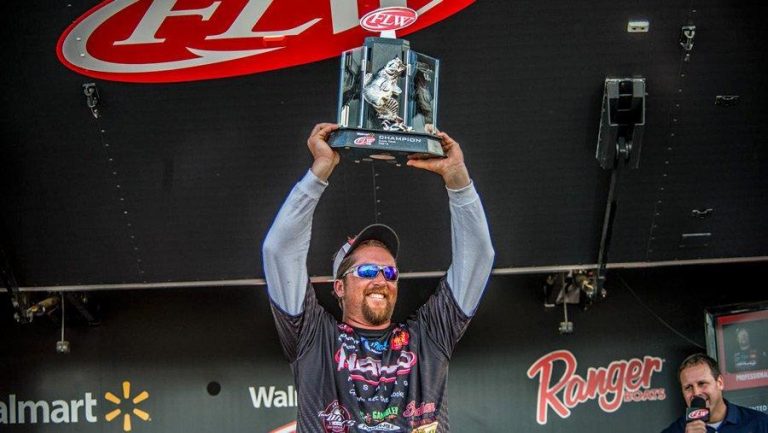 FLW Tour pro J.T. Kenney of Palm Bay, Florida, brought a five-bass limit to the scale Sunday weighing 9 pounds, 4 ounces to win $125,000 at the Walmart FLW Tour at Lake Toho presented by Mercury with a four-day cumulative total of 20 bass weighing 76 pounds even.

After dominating the tournament for the first three days of competition and taking a 12-pound, 8-ounce lead into the final day, Kenney slipped a bit Sunday. But, despite valiant final-day efforts from Tour-veterans Quaker State pro Scott Canterbury of Springville, Alabama and Wesley Strader of Spring City, Tennessee, Kenney managed to hang on and win by a narrow 11-ounce margin.

“The weather was nice today so I went back and tried to catch the big ones in Kissimmee on the Gambler Fat Ace,” said Kenney, who earned the second Walmart FLW Tour victory of his career. “I think that they must be done with their reproductive cycle – they were gone.

“I did the best that I could do,” Kenney said. “I hate to use the cliché, but I left everything out on the water this week. It obviously worked out really good for me, but it has been a long week.”

Kenney said that on the first two days of competition that he landed his big fish in Lake Kissimmee using a Gambler Fat Ace in black and blue, X-mas and watermelon red colors using 17-pound test Berkley Trilene fluorocarbon line on his J.T. Kenney-signature series Halo Rods. He was forced to scramble on day three, opting to fish in Lake Toho and switching to a Nichols Lures Pulsator spinnerbait to fill his limit. Kenney returned to Lake Kissimmee Sunday and managed to catch his limit and seal the win.

“I stayed focus and stuck with my guns,” Kenney went on to say. “If we had to restart this tournament tomorrow, there is not one single thing that I would do differently.”