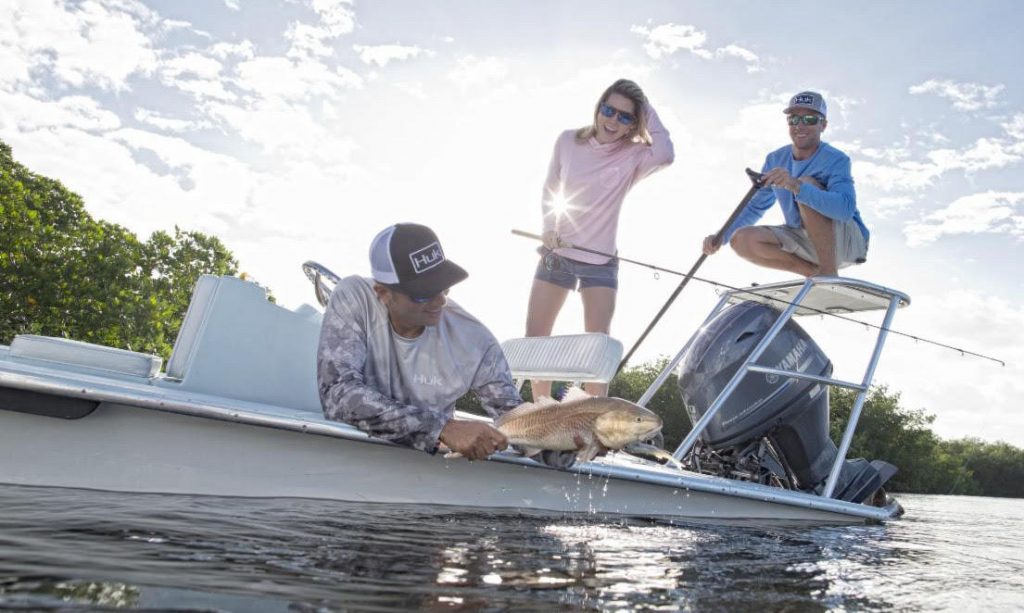 Designed by K.C. Scott, Huk’s Refraction Camo is perfect on the water, but still manages to be at home at the bar. Refraction Camo showcases anglers’ love of the water through a contemporary, stylish design. This is a perfect pairing with Huk’s technical fishing clothing, which is ideal for an active lifestyle but is equally suited to lounging by the pool or grilling with friends.

Since his first taste of saltwater on his family’s annual trip to the Florida Keys when he was three, Scott has been hooked. That love of the water shows up in all of the fine artist’s oil and acrylic works, as well as his apparel designs. Scott pours the ocean through his paintbrush and onto Huk’s performance fabrics.

“Every single pattern comes from nature, with my unique take on it,” said Scott. Scott’s one-of-a-kind perspective allowed the renowned artist to create Huk’s Refraction Camo. The inspiration for Refraction came from Scott’s observations while free-diving over grass flats. Scott wanted to create a camo that mimicked the patterns of light dancing on the ocean floor. He then combined influences from industrial elements and cityscapes to create the foundations of what became Refection camo.

Scott captured Mother Nature’s ability to bend light beams and combined it with geometric patterns to create Subphantis Refraction, giving a new and fresh twist to the ever-changing world of camouflage. The resulting patterns bridge natural and linear elements to create a clean and esthetic look that distracts the eyes and hinders their ability to focus on a finite point. As a result, anglers wearing Subphantis Refraction can often hide in plain sight.

Refraction Inshore draws inspiration from permit, ghosts of the flats, that use the shadows from both clouds and structure to virtually disappear in only a few feet of water. The pattern mixes aqua blues with grays to help anglers blend into the open sky on a salt flat.

Inspired by the waters surrounding San Salvador, Refraction San Sal captures the essence of the epic Bahamian island. Located at the extreme eastern edge of the Bahamas, the waters are as clear as you’ll ever find with offshore blues so deep they’re almost purple. Inshore, white sand bottoms contrast with reefs casting dark gray shadows and clash with the offshore currents to create deep aqua hues.

Refraction Storm captures the wrath of an oncoming storm with gray patterns that emulate swirling waters and wind. This pattern is ideal for those thrill-seeking anglers who have to put just one more fish in the boat before all hell breaks loose.

Scott drew on the greens from the pines and the dark shale cliffs that line the edge of one of the most breathtaking freshwater arenas in the entire world, Lake Superior. The resulting pattern, Refraction Superior, blends perfectly with any freshwater ecosystem.

Refraction Ice Boat design utilizes the blue tint that ice exhibits when it is cut alongside the snow and gray skies that winter so often brings. This new pattern is perfect for the hard water or just when you’d rather be fishing on a cold winter’s day.

The Refraction line of go-anywhere performance clothing blends into its surroundings on the water but never looks out of place on land. Huk’s exclusive patterns are unlike any other on the market, and are available in a wide range of styles and clothing options.