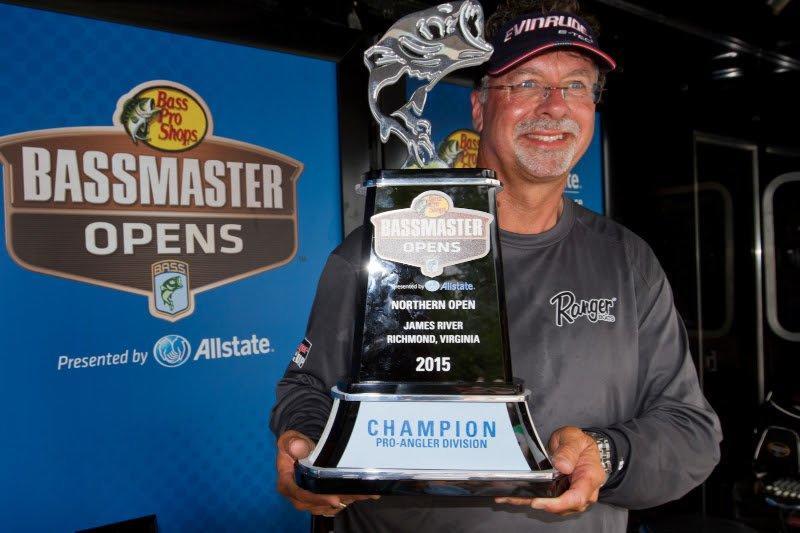 Chris Dillow couldn’t match the 20-pound bag that Boyd Duckett brought to the scales on the first day of this year’s Bass Pro Shops Bassmaster Northern Open #1, but he never faltered. Dillow caught 19 pounds, 2 ounces of James River bass Saturday to bring his three-day total to 50-12, enabling him to defeat his closest challenger by a margin of more than 9 pounds.
The victory earned him a Nitro Z9 bass boat and tandem Nitro trailer rigged with a Mercury 225 Pro XS valued at $45,000.

While the majority of the field made long runs and burned dozens of gallons of gas each day, Dillow stayed close, never venturing past the mouth of the Appomattox River tributary. He maximized his fishing time and generally avoided the crowds. Similarly, while others rued the increasingly undesirable and unpredictable tidal flows, Dillow was glad the water was higher than normal for longer than normal.

“I like high tide,” he said. “I like that security over my fish. When it gets too low, they tend to get spooky.”

The realtor from nearby Waynesboro, Va., relied on a jig of his own making — the Dillow’s Perfect Jig — as well as a Strike King DB Structure jig to pluck his fish from a variety of hard cover, including rocks, wood and several sets of old pilings.

“It’s a milk run that I fish all the time,” Dillow added. Included in that series of stops were “one or two community holes” that enabled him to fill out a limit and then push forward in search of kickers.

He fished the jigs on a 7-foot, 11-inch G.Loomis GLX flipping stick paired with an 8:1 Lew’s Speed Spool baitcasting reel spooled with 20-pound-test Seaguar Invizx fluorocarbon.
Duckett’s unheard-of 20-4 limit on Thursday had Dillow in second place, but even Dillow’s subpar 12-13 on Friday allowed him to claim a lead that he wouldn’t relinquish. Duckett was not able to amass a double digit catch either the second or third day.

After falling to second on Friday, Duckett ended the tournament in 12th place. Like many others, he was a victim of a tide that didn’t go out according to the tide charts, and then a decreased amount of “good low tide” on the short final day of competition.

As Duckett and others like Dave Lefebre struggled to match their heavy first-day catches, Ohio pro Michael Simonton remained exceptionally consistent over the course of the three days. The former Elite Series angler turned in catches of 14-14, 13-10 and 12-11 to finish second with a three-day total of 41-3. He relied primarily on a black Spro frog, but only had a limited period of time to produce his fish.

“The first hour when we started fishing was game time,” Simonton said. “It was fast and furious and awesome. Today, I stayed in my primary area and never left. I’m not sure why it was so good. There was a boat ramp nearby, and I was skipping the frog to laydowns and under overhanging trees.”

Adrian Avena of Vineland, N.J., finished third with 36-3. Like Simonton, he was consistent, producing limits that weighed 12-10, 12-9 and 11-0, but was unable to consistently catch the larger fish that Dillow corralled. He credited his New Jersey upbringing with teaching him how the fish relate to tidal movement, but noted that he couldn’t capitalize on unfavorable tides.
“The tide was coming in most of the day,” Avena said. “That didn’t matter on my starting place, but after that it was pretty much a grind.” He used a “power drop shot,” a finesse worm and a 1/2-ounce Zorro buzzbait to put together his limits.

In past Northern Opens on the James River, most of the leaders amassed their catches in the Chickahominy River, a 45-minute run from the Osborne Landing launch site. This week the “Chick” once again saw plenty of boat traffic, but it didn’t produce the best catches.

Nick Angiulo of Hainesport, N.J., won the co-angler division with three three-fish limits that totaled 21-3. Greg Mauldin of Archdale, N.C., was second with 20-15, and Lou Britos was third with 19-12.

Dillow’s second-day leadership earned him the $250 Livingston Lures Leader Award. Britos captured the same title among co-anglers, pocketing a $250 Livingston Lure Pack.
Chris Flint of Potsdam, N.Y., won the Allstate Good Hands, Great Day of $250 for moving from 136th place to 52nd after Day 2. Among co-anglers, Matt Madlener of Illinois moved from 125th to 10th to garner $150 from Allstate.

Texas pro Trait Crist landed the Bass Pro Shops Big Bass of the tournament, an 8-pound largemouth that ate her finesse worm on Day 2, earning her $750. Britos won the same award on the co-angler side by virtue of a 7-2 bass that he caught on Day 1, earning him an additional $250.