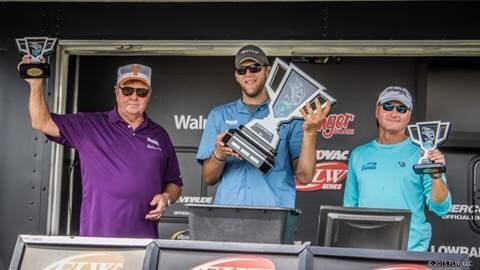 The Mystik Lubricants-sponsored trio of Bill Dance, Cody Detweiler and Dave East brought a five-bass limit to the scale Tuesday morning totaling 17 pounds, 1 ounce to win the inaugural ICAST Cup presented by FLW bass-fishing tournament on Lake Toho. For their victory, the trio each earned trophies to take home and the title of ICAST Cup Champions.

The event marked the start of ICAST, the largest sportfishing trade show in the world. The tournament launched out of Big Toho Marina in Kissimmee, Florida, and featured 61 teams competing for bragging rights and to raise money for the KeepAmericaFishing™ foundation. Each company that sponsored a boat donated a minimum $100 entry fee to the foundation in order to compete. After the final fish had been weighed Tuesday, more than $6,300 was raised for the KeepAmericaFishing™ foundation.

“I’ve said many times that you’re only as good as the people you fish with and Cody (Detweiler) certainly knew what he was doing,” said Dance, the professional bass-fishing legend who has hosted Bill Dance Outdoors for more than 40 years. “I was very, very fortunate today and I fished with two great guys.”

The team estimated that they caught around 10 bass in the three-hour event, with the majority of their fish caught on a white and red Bass Pro Shops XPS Buzzbait and a few on a watermelon red-colored frog. They targeted two grassy areas within sight of the marina for the duration of the event.

“We were fortunate to get out there and catch our fish in the first two hours of the day,” Dance said. “This is the first year that this tournament has been held and I had a super time. I really enjoyed the early start and the quick format and it is all for a great cause. If the Good Lord is willing, I’ll be back next year.”

The top 10 teams finished the tournament in:

Complete results for the tournament can be found at ICASTCup.com.

Photos from the event can be found at FLWFishing.com/icast.