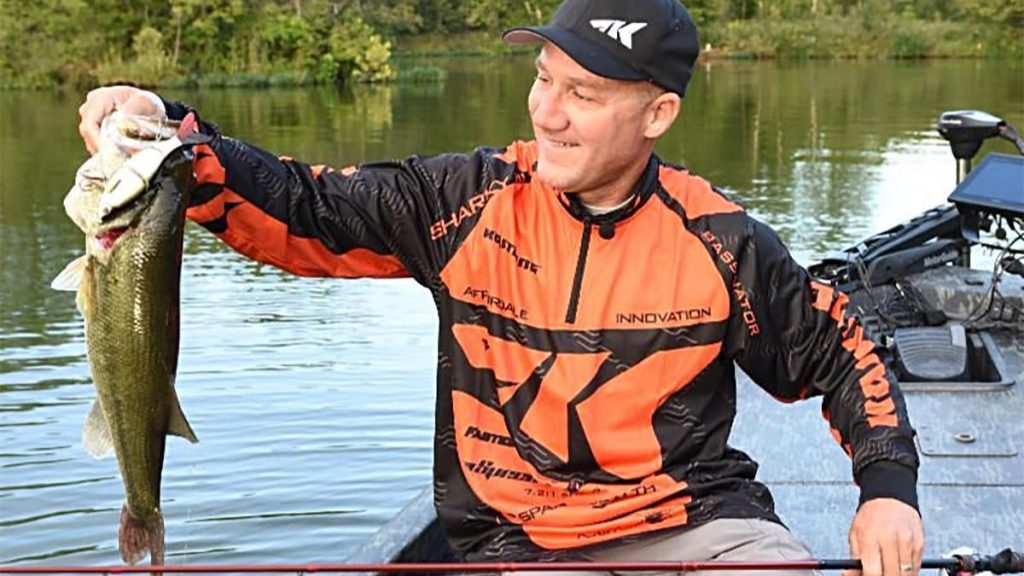 Chapman is a Bass Pro Tour Angler from Lake Quivira, KS. During his remarkable 20-year professional fishing career on the Bassmaster Elite Series, Chapman earned over $2 Million in prize money and qualified for 14 Bassmaster Classic events. Chapman earned the most respected title among anglers when he won the prestigious title of Bassmaster Angler of the Year in 2012. Chapman stays connected with his more than 160,000 social media followers as he competes at the top levels of competitive bass fishing in Bassmaster Elite, Major League Fishing, and now the new Bass Pro Tour Series , and his TV show Pro vs. Joe Fishing.

“I am so excited to have KastKing in the boat with me for competition,” said Chapman. “The Speed Demon rods and reels are incredible. They have already proven themselves to me. When you compete against the best bass anglers in the world, it is critical to have the best equipment.

“KastKing Speed Demon Pro fishing tackle gives me an advantage and are top quality. No doubt… KastKing will give me a competitive edge and help me put more fish in the boat. It feels good to work with a brand that can deliver on their slogans; KastKing Keeps Fishing Fun and Affordable Innovation by making great fishing tackle affordable and easily available to anglers everywhere at almost any fishing budget level. I look forward to working with KastKing to develop additional pro-level fishing gear and more products that recreational anglers and tournament anglers can enjoy and benefit from.”

“We are delighted that Brent Chapman chose KastKing as his fishing rod, fishing reel and fishing line sponsor. It speaks volumes for the advancements that KastKing has made in a very short time to provide exceptional quality and value,” says Tom Gahan Chief Marketing Officer at KastKing. “Given Brent’s long list of major accomplishments that includes 14 trips to the Bassmaster Classic and an AOY title, it’s fair to say he can be selective in deciding what brand or brands to sign with. We are honored that Brent quickly saw the ability of KastKing fishing tackle to perform at the demanding levels of pro tournament fishing.”

In 2019 Chapman will compete in the Major League Fishing Bass Pro Tour with 80 other top-ranked professional anglers that brings a strong schedule of television programming across six networks. According to Major League Fishing, “…While MLF will continue its popular Cup events and World Championship, airing on Outdoor Channel, CBS Network and CBS Sports cable, it will now also have the Bass Pro Tour competitions and championship airing as originals on Discovery Channel with re-airs on Sportsman Channel in 2020. Altogether, Major League Fishing will air more than 850 hours of television programming in addition to the more than 350 hours of live coverage that will be streamed on majorleaguefishing.com…”

Brent Chapman commands additional TV coverage as the star and host of
Pro vs. Joe Fishing; a fishing reality TV show that airs on the Pursuit Channel. In each episode of
Pro vs. Joe Chapman takes on challenges from amateur anglers around the country to test their skills against him on their own lake.

“Over the last several decades I’ve been so fortunate to work with some of the best anglers in America while designing and building fishing rods and reels that will compete and win in a very competitive environment.” Says Al Noraker, Director of New Product Development at KastKing. “It’s now my sincere pleasure to work with Brent Chapman. He is one of the best bass fishermen competing today. As KastKing continues its tradition of delivering true performance gear to anglers around the world, Brent shares our goal of providing the very best quality, at prices that any everyone can afford. While I will have the advantage of using Brent’s incredible insight and experience in the design process, the KastKing customer will be rewarded with innovative products at affordable prices!”

“I am looking forward to working with Al Noraker and the KastKing engineering team to develop additional high-end professional rods and reels,” added Chapman. “I’ve already been impressed by the quality of KastKing’s tournament level gear. Now it’s time to take it a step further and expand the KastKing lineup. I cannot wait to share these new, reasonably priced products with our fans on social media.”

Brent Chapman is married with two children. His wife Bobbi and their children accompany him around the country on bass fishing tournament trails. Chapman is an outdoor enthusiast both as a profession and as a hobby. He is an accomplished hunter with both a bow and firearms. Brent enjoys spending his off season stalking big game and working with the hunting community on game and land management. Brent has enjoyed hunting in many states and has been featured on the Outdoor Channel for live hunts, and providing hunting tips to hunters around the globe.