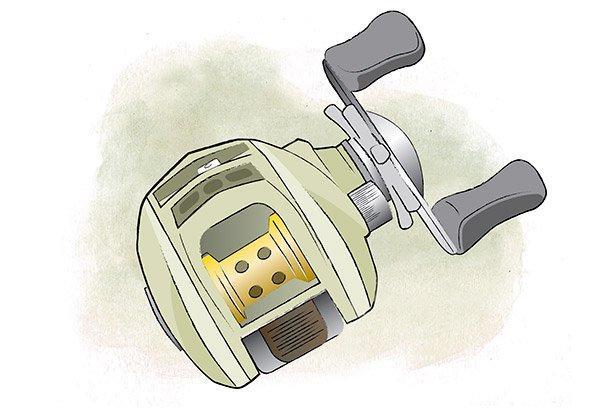 A fishing reel gives you a great advantage in fishing for bass. Sure you can tie a string to the end of a long stick and catch fish with earthworms on a hook. But you’ll be extremely limited. The reel gives you the ability to hold many yards of line in a compact space but then be able to launch a lure a greater distance and make that lure come alive with retrieves and reeling.

The reel paired with a rod serves two purposes. First, it allows you to get a bait close to the bass without the angler having to get too close and spook the fish.   Second, it lets you cover more water on a single cast of a bait. When you turn the handle, you retrieve the line and your bait is now able to entice fish the entire distance from where the cast landed to where the angler casted from

Parts of a reel

The parts of a reel vary depending on the type, but essentially every reel will have some sort of the following components:

There are essentially three types of reels most common to bass fishing. One could also make an argument for fly fishing reels, but for now we’ll stick with the three conventional models of reels: 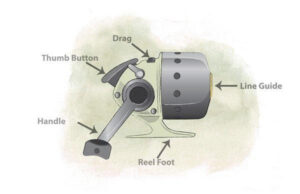 A spincast reel was invented by the Zero Hour Bomb Company in the late 1940s. But when their third production model, the Zebco 33 was released a new realm of recreational fishing took off. These push button reels were so simple to use, anyone could pick them up and quickly learn to get their baits out into the water farther.

One of the drawbacks to the reel is casting distance, weaker drags compared to spinning and baitcasting reels, slower gear ratios (meaning you have to turn the handle a lot more to take up the same amount of line), and usually limited line capacity. Heavy line can be hard to cast on a spincast reel.

It’s positives include how easy it is to spool, how easy it is to cast and how simple the design is especially for younger anglers. It’s a great reel type for just starting in the sport or enjoying a day of panfishing on your favorite lake shore. 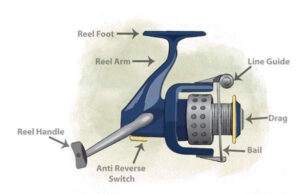 A spinning reel features an “open face” spool not hidden under a screw cap that a rotating bail spins around to wind line on the fixed spool. The spool is on a spindle. As you fight a hard pulling fish, the spool is able to spin backwards with some resistance created from drag washers on the gears. You can tighten and loosen the drag to the size of the fish and the size of your fishing line to avoid break offs or long runs and lack of control when fighting a fish.

To cast a spinning reel you first pinch the line to the rod just above the reel with the line pick up on the bail parallel to the rod. Then fold the bail up sideways to open it. Keep holding the line on your index finger as you go back with the rod. Then as you release forward, you will let the line off of your finger. Obviously it takes practice, but it becomes second nature after just a few outings.

We delve deeper into casting spinning reels in this video.

I skipped spincast reels with my son and went straight to spinning reels because I felt he would get more out of them.

Spinning reels excel at light line applications and small lures that can be hard to cast on spincast and baitcasting reels alike. In recent years, braid has become a staple on spinning gear for bass fishing. You still want to keep the line size down to 6- to 12-pound diameters with braid so it doesn’t get unmanageable on a spool. And many anglers will put a lighter fluorocarbon leader on the end of the braid for fishing in clear waters.

The drawbacks to spinning reels can be line twist and and line coils since the line has to be wound around a fixed spool. They offer back reeling which none of the other reels offer. You can disengage the anti-reverse mechanisms native to fishing reels and actually reel your handle backwards when you fight a fish. Some anglers still prefer to fight bigger bass with this method because they just don’t trust the drag to smoothly start and stop with light line on a hard run by the fish. 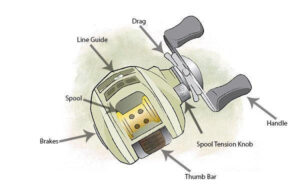 Unlike the fixed spool of the spincast and spinning reels, a baitcaster actually has a spool that spins to take up line and also unravel the line on a cast. This style of reel offers a better way to cast heavier lures and to spool up with heavier line. Since it doesn’t have to be twisted onto a fixed spool and can be wound on more like a winch, you can put heavier pound-test line on a reel but still get very long distant casts.

If a spool spins too slowly, the cast will end short of its desired distance. If a spool spins faster than the line is being pulled off by the bait on a cast, the line will tangle and overlap causing what is known as a backlash, or a tangled mess of loosely spooled line.

So to combat this a baitcast reel has a tension knob that applies direct tension to the spool so you can slow it down or speed it up with friction. Better baitcasters also have braking systems, either magnetic or centrifugal friction brakes on the inside of the spool. Sometimes drag can have an impact on the spool and reel handle and can be altered separately. So when you see all the knobs on a baitcaster, know that each one serves the purpose of controlling how fast or slow line is spooled off the reel.

The other unique part of a baitcaster is the line guide. This worm gear on the top front of the reel goes back and forth as a reel is engaged and the handle turned. Because the spool winds the line on for you, there has to be a mechanism to put it evenly on the spool. So as you turn the handle, the line winds back and forth, giving you a nice evenly filled spool.

Casting is where it’s at in bass fishing. You’ve got to be able to get the lure out to the intended target or area where you think the bass are. We’ve shot some videos and wrote some specific articles on how to learn to cast a fishing reel. Check them out here:

We’ve reviewed many of the reels on the market and continue to do so in our reel review section of wired2fish.com. We’ve also created a great resource piece to help you understand a pivotal part of fishing reels â€“ the gear ratio. The gear ratio essentially determines how many times line is wrapped on a spool with a single turn of the reel’s handle.

We often get asked, what are the best reels for the money. Reels are like anything else in life. Personal taste often dictates what folks find good or not. But one thing that does seem to influence a lot of purchasing decisions is price. So here is an article on low-cost baitcasting reels you might find helpful. We’re working on updating this to the new reels of today and will release that soon as we get all the budget reels tested. But a reel is an investment. If you take care of it, a reel will last you a decade or more.