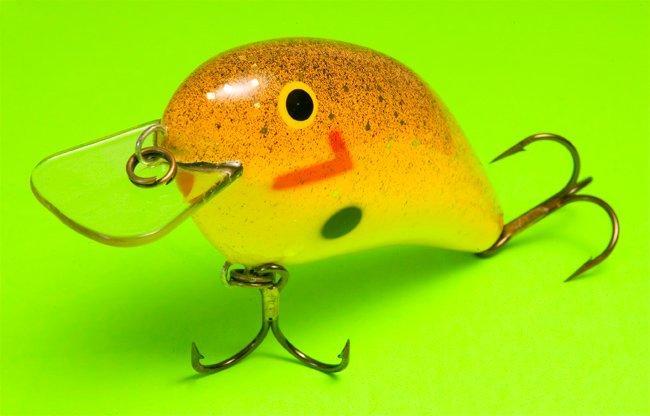 Hardly anyone talks about square bill crankbaits anymore. Okay that was a joke. It’s all you hear about anymore when it comes to shallow crankbaits. KVD won the Bassmaster Classic on one and several other major tournaments have been won on square billed crankbaits. Some folks think they were just created in the last 5-10 years but the credit actually goes to Fred Young when he started hand carving his Big O back in 1967. That’s right it’s 45 years old.

His hand carved crankbaits were an immediate success and in great demand for years. He would hand carve and hand paint each bait and at the time, no two baits were alike. It wasn’t until Cotton Cordell took over that the bait was more readily duplicated. However it was also changed to plastic at that time.

The original Big O set the bar for shallow balsa baits. It could walk through cover and deflect off rocks and hard bottoms like no other bait before it. So it was immediately popular with avid anglers.

Now the market is flooded with square bills as we reviewed in our Two Part Series on Square Bill Wars. So its influence is still seen in todays manufacturing and power fishing patterns.

For this incredibly long lasting influence, we named the Fred Young Big O our No. 7 Most Influential Bass Fishing Lure of all time.