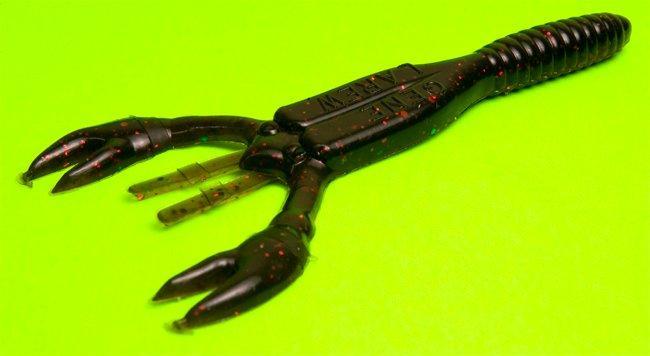 It may not have been the first or the best ever made, but the Gene Larew Salt Craw has stood the test of time, won many professional tournaments and brought something into the forefront in manfuacturing of soft plastic fishing artificials. This long hybrid worm / craw plastic offering was destined to turn a lot of heads from day one — both on the shelves and in the bushes.

Anglers were immediately attracted to the shape and profile. Its size made it a great jig trailer as well as a great Texas-rigged offering for flipping heavy cover. But the real innovation was the ability to cook salt into the plastic pours so that the salt was not just sprinkled onto the bait or in the bags (a process we find very annoying as anglers) but actually poured as part of the bait.

In fact for a time, Gene Larew held a patent on putting salt in baits by which companies like Zoom just paid royalties to put salt in their baits. The patent has since lapsed. This innovation, however, helped spur development of plastics and soft baits with scent and taste being added to the baits. This was a game-changing idea at the time and definitely helped the sales of the Salt Craw.

But make no mistake, the bait has caught some giant fish and proven itself in the biggest of stages in competitive fishing. While you don’t hear as much buzz about the Salt Craw, it’s still a viable option that has lasted many years in the fishing industry and to which a lot of baits stemmed from.

For these reasons the Gene Larew Salt Craw is our No. 6 Most Influential Bass Fishing Lure of All Time.