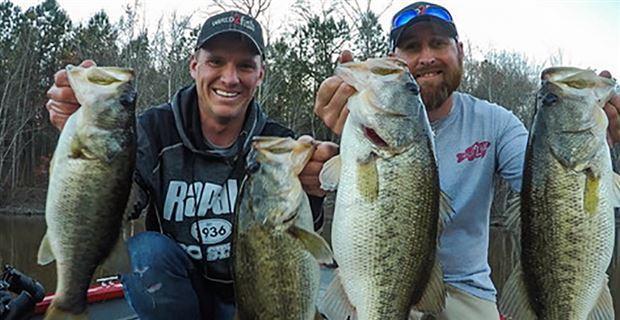 It takes a lot for tackle to impress me nowadays. I see and fish with the newest tackle each year and very rarely does it blow me away. I make a concerted effort to sift through the marketing jargon and discover whether or not it’s worth our readers spending their hard-earned money on.

I take that duty very seriously.

With that being said, I also consider it an obligation to spill the beans whenever I finally run across a product or technique that knocks my proverbial socks off. That’s what my job is about: Helping folks catch more fish.

So trust me when I say this: You need to be throwing the Ned rig. Yesterday.

What took me so long

When the Ned rig first came to my attention, I’m not afraid to admit that I scoffed at it. I had seen a bunch of fish photos with it, but I never saw a single fish over 2 pounds. It’s essentially a small jighead with an even smaller plastic threaded up the shank of the hook, so it seemed great if you wanted to catch a bunch of tiny bass. But I like catching big fish.

Furthermore, everyone was saying you had to fish this rig with 6 or 8-pound line on a flimsy little spinning rod. The thought of that did not interest meâ€”not even a little bit.

What made me try it

I guess it could be summed up in just one word: Desperation. But allow me to elaborate.

One of our awesome video producers, Kyle Peterson, flew down to Georgia in order to spend the week filming with me. We had this trip planned for months. Big, prespawn females generally start gagging on crankbaits this time of year, so I figured we would be able to knock out a bunch of incredible videos that our readers would enjoy. But as is often the case when cameras get involved, the worst cold front of the year hit us right in the mouth.

The fishing was horrible, the air temperature dropped 30 degrees overnight, the wind was gassing about 35 miles per hour and we were in a pickle. We didn’t spend all this time and money to get skunked, so we had to make something happen.

The next morning before leaving the house, I opened my Z-Man storage bin and did something I never thought I’d do. I picked out some 1/6-ounce Finesse Shroomz Weedless jigheads and a few packs of 2.75-inch Finesse T.R.D. worms.

Mr. Power Fisherman was about to fish a worm the size of my pinky finger.

We put the boat in that second morning and the conditions were still horrible. Cold, muddy water and lots of wind made me wonder whether or not I could even feel a bite on this little Ned rig.

Then I made my second cast and caught a 3-pounder. After a few chuckles with Kyle, I brushed it off as a fluke and kept working my way down the bank. I didn’t know how to fish it, I had no idea how to set the hook with such a tiny jighead and my confidence was still pretty low. 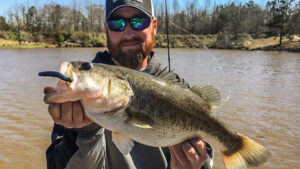 I didn’t want to jump the gun and prematurely proclaim this Ned rig as a miracle technique, so I picked up a flipping stick and a small Texas rig. It’s pretty much the same thing and I was much more comfortable with it, so I figured it would produce some nice bass as well.

I was wrong. After an hour of pitching and flipping, I didn’t have a single bite. I put it down, picked up my Ned rig and within a few minutes, I was fighting a 4-pounder to the boat.

I fished this 1/6-ounce Finesse Shroomz Weedless jighead and Finesse T.R.D. for the large majority of the day and I’m not exaggerating when I say that I lost count of the number of 4 and 5-pounders I caught. Kyle and I were both blown away by its effectiveness. Given the conditions, the fishing should not have been good that day. It should have been terrible. But it was one of the more memorable days I’ve ever had on the water. I will remember it until the day I die.

What I’ve learned about it so far 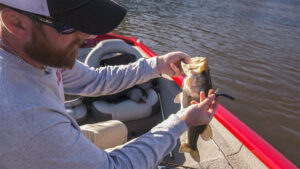 I’ve only fished this rig for a few days, so I’m not going to act like a big-shot expert and try to turn this into a full-fledged instructional piece. It’ll come, but I feel like I need a little more experience before I start giving detailed lessons.

But if you decide to try it after reading this articleâ€”and you certainly shouldâ€”here’s what I know about it so far.

I have had most of my success fishing the Ned rig just like a shaky head. I’ll let it hit the bottom and barely pop the slack in my line. It’s a slow technique, so don’t get impatient with it. For whatever reason, I’ve also been catching a bunch of fish as I’m reeling it back to the boat. I haven’t quite figured this deal out yet, but there has to be something more to it.

I figured out a really good setup and I don’t see my preference changing anytime soon. It could, but I doubt it. I’ve been using a 6-foot, 9-inch medium 13 Fishing Muse Gold Spinning Rod with a Daiwa Procyon EX Spinning Reel. I can’t quite get the gumption to scale down to 6-pound line, so I’ve been sticking to 8-pound fluorocarbon. Whatever brands you like, just make sure you use a rod with a soft tip and a reel with a smooth drag. Keep it simple.

This took me a few screw-ups to figure out, but it’s easy once you get the hang of it. When you get a bite, start winding and quickly lift your rod. It’s not a slack-line hookset (you will break your line, because I did a few times). I compare it to a drop-shot hookset. This is one of those things that an article can’t teach you, but I believe these guidelines will help shorten the learning curve.

In my limited experience thus far, I’ve had two types of bites. Either the line will go completely slack or it will feel exactly like a Texas rig bite. It’s important to watch your line, but you shouldn’t have to wait too long before setting the hook. It’s an itty bitty rig, so the bass usually suck it in on their first try.

The Ned rig itself

If you’re casting or skipping, I’d suggest going with the 1/6-ounce Z-Man Finesse Shroomz Weedless jighead. It doesn’t seem to matter what color jighead you use in most situations. The weed guard is incredibly effective, but that doesn’t mean you should cast it into the middle of a thick laydown. It seems to shine brightest when skirting the sparse perimeter of cover. I have used one jighead to catch over 30 fish and have not experienced any bending or flexingâ€”just the occasional adjustment of the weed guard. I’ve been using the Z-Man Finesse T.R.D. in junebug (stained water) or green pumpkin (clear water) colors. A week later, I’m still using the same worm that has caught well over 30 bass. 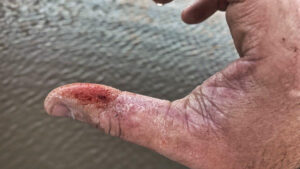 Do yourself a favor

Try it. I know it might not be “your style” of fishing, but it will catch the ever-living tar out of ’em. Kyle and Ryan are putting together the video of our Ned rig beatdown and it will be published next Monday. You will literally watch this whole thing unfold and get to see me fishing it and learning it for the very first time.

It’s hard to argue with the results. I’m a believer.