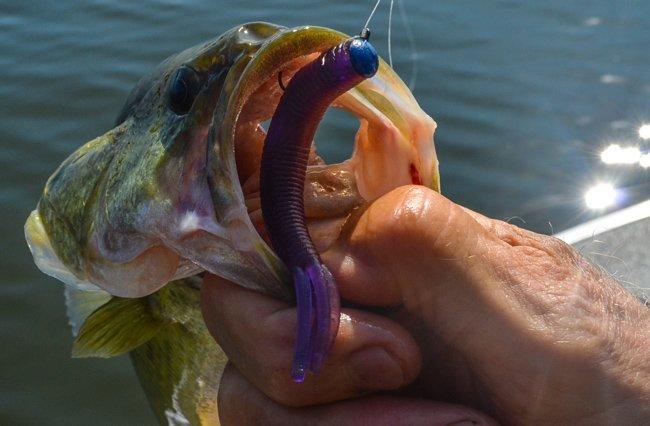 This past July at ICAST in Orlando, Fla., Z-Man introduced a new finesse plastic to their lineup — the Finesse TRD. On this new bait’s package, there was a sticker stating “Have you tried the Ned rig?” The “Ned rig” is unfamiliar to most anglers. Some folks in the know call it the “dookie rig” for its less than attractive appearance. We’re going to clear that up because it’s a great finesse rig not just for bass.

There isn’t a lot to the rig named for its creator, Ned Kehde, but it’s versatile and effective. Here’s a rundown of what you need to know about the Ned rig: 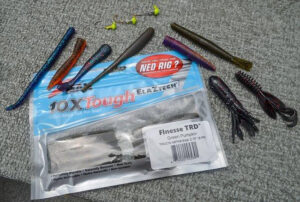 Simply put, the Ned rig is a small plastic rigged on a light jighead, almost like an ultra-finesse shaky head. This technique can imitate a wide variety of forage, based on color choice and presentation. No matter what you are trying to imitate, however, the equipment remains the same. Jighead: This is where it all really starts, as you use much lighter weights with this rig than you would with most bass rigs.

“There are 3 sizes of jig that we like to use for the Ned rig,” Kehde said. “At the lightest, we will throw a 1/32-ounce jig. The majority of the time, we use a 1/16-ounce jig which will cover most situations. Last, we fish a 3/32-ounce jig when it is either very windy or if we are trying to get our baits deeper.”

A mushroom-shaped head is the popular style for most “Ned-riggers”. Kehde prefers the Gopher Tackle lineup of jigs, while other popular choices are the Outkast Tackle Money Jig and the Z-Man Finesse ShroomZ.

Plastics: There is a wide variety of baits that can be rigged and used on the light jighead, with the majority of them in the 3 inch class. Kehde, as well as many other longtime users of the rig, prefer the ElaZtech lineup of baits offered by Z-Man.

“My main choices throughout the year include the ZinkerZ (cut in half), Finesse ShadZ, and Finesse WormZ,” Kehde said. “Z-Man offers several baits that we like to use, but aside from their offerings, I also like a Strike King Bitsy Tube and a Gene Larew Hoodaddy Jr.”

Kehde throws just about any color depending on what the fish are feeding on. Popular colors include green pumpkin, junebug, and white.

Line: Because the jigs are so light and feature such small hooks, using light line is important for proper presentations and hooksets. Line sizes in the 4 to 10-pound-test range work best.

“I use 10-pound high-visibility yellow braided line on all of my rods,” Kehde said. “I will then attach a 6-foot leader of 8-pound test fluorocarbon to reduce visibility to fish.”

Rod: Kehde is a large advocate of frugal fishing, so his rod choices are much older, inexpensive spinning rods. He suggests a medium-power, fast-action spinning rod for best results. Many advanced bass users of the rig have found a drop-shot rod to work best.

Reel: There is a lot less variability for spinning reels than for the other equipment, so choose a reel you are comfortable with and that handles light line effectively. 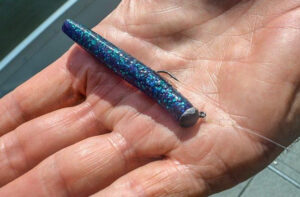 How to make it work

There is really no wrong way to fish the rigs. Kehde has developed 6 presentations, which all have a time and place. According to Guido Hibdon, most finesse anglers use too heavy of a jig because they want to feel it traverse across the bottom. He believes that these baits perform more naturally when paired with lighter weights. Kehde stresses that this technique is a “no-feel” presentation, and it takes time to develop an angler’s feel for the rig.

Swim, glide and shake: When fish are feeding more aggressively, Kehde utilizes the swim, glide, and shake retrieve. This technique consists of casting your rig out and letting it fall to the bottom before beginning your retrieve. While the bait falls to the bottom, Kehde shakes his rod lightly to employ more action. After it hits the bottom, he shakes and reels his rig back to the boat, while trying to keep it 6-12 inches off the bottom. If it gets too far off the bottom, he will let it drop again and start over. Kehde notes that this is a good retrieve for suspended fish as well.

Straight swim: This retrieve is pretty obvious. Kehde likes to keep his rod tip down with a slow-paced retrieve when he fishes around submerged vegetation and weed beds. For this technique, Kehde generally prefers baits with some tail action, such as a small grub or swimbait, but he doesn’t hesitate to throw any of his other options.

Drag and shake: When the fishing is a bit tougher, or if the bass are bottom-oriented, Kehde opts for the drag and shake presentation. It is very similar to working a shaky head; Kehde keeps the bait on the bottom, while pulling and shaking the small plastic with his rod.

“We were watching Shiniki Fukae at an FLW tournament a few years ago, and noticed how much he likes to shake his rod while working finesse plastics,” Kehde said. “Since that day, we began to shake our rigs much more aggressively and to much success.”

Hop and bounce: When the bass are keying on crayfish and other underwater crustaceans, Kehde prefers to use the hop and bounce retrieve. He lets it hit the bottom like the other retrieves. Then, he makes two turns of the reel handle, lets his bait settle to the bottom again and repeats all the way back.

Stroll: When Kehde is trying to cover a large flat or an area where the bass are spread out, he likes to “stroll” his rig. This retrieve requires the trolling motor. Let the bait settle but let the trolling motor or wind do the work until the bait is directly behind the boat, when you reel it in and make another cast.

These are the presentations that Kehde has utilized over his many years, but there is no wrong way to fish it.

“Try it for yourself, and find a way that you feel comfortable catching fish,” said Kehde.

Works all the time

Kehde fishes almost year-round, including trips to a hot-water discharge lake during the winter. He throws the Ned rig nearly 100% of the time.

“This technique works year-round, but I would say that ice-out is one of my favorite times to fish it,” Kehde said. Although this bait can be thrown 12 months out of the year, it is generally of most importance to anglers in the winter and prespawn months as well as the heat of summer when the bite gets tough.

Obviously, if you fish a rig that isn’t even 1/8 ounce, you are limited to the depths you can fish. The Ned rig excels in shallow water 1-7 feet deep. With an exposed hook, it is also limited to “less-snaggy” areas without an abundance of cover. If the underwater cover does not extend to the surface, however, you can present your Ned rig effectively over the top utilizing the proper presentation.

While it’s looks are deceiving, it is an effective choice for not only catching large quantities of fish, but also catching inactive, pressured fish. With increases in fishermen’s knowledge as well as fishermen, it is getting harder to catch bass in many fisheries. Downsizing your presentation to a Ned rig can be a very smart choice when looking to pick up a few more bites. 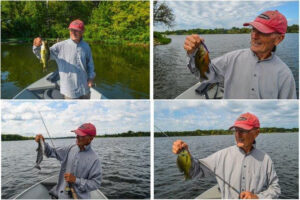 All anglers can use it

Because it is so simple yet effective, pretty much anyone can throw it and have success. Whether you are just a beginner or a serious tournament fisherman, you can benefit from this rig.

When we make it known to friends and family that we fish as much as we do, they eventually want to come along. Many of us become so advanced with our fishing techniques that we forget just how much of a learning curve there is for fishing in general. What is particularly nice about the Ned rig is that children and other inexperienced fishermen can throw it.

“This style of fishing is a great way to get kids involved in the sport of fishing,” said Kehde. “You might not always catch the biggest fish, but you can catch large quantities of fish per day, which keeps the kids interested.”

If your goal on the water is to simply catch fish, or large quantities of fish, the Ned rig can definitely help.

“On every outing, our goal is to catch 101 bass in just 4 hours of fishing,” Kehde said. “Depending on the year, we normally reach our goal 2-5 times per year.”

Although Kehde targets bass on every outing, this rig is also a very effective choice for other species such as crappie, sunfish, and white bass. For the multispecies anglers, a Ned rig can be a good “one-bait-fits-all” approach.

Sometimes, downsizing can be key to catching your last bass to fill a limit. Throwing a Ned rig during a tough tournament can be the difference between cashing a check and going home empty-handed.

History of the rig

The Ned rig was named after Ned Kehde of Lawrence, Kan. Growing up in Sedalia, Mo., Kehde fished the Ozark region of the country. While he was a graduate student at the University of Missouri, Kehde guided at Carrington’s Two Waters Resort on the Gravois arm of Lake of the Ozarks.

There he met Guido Hibdon, who also worked at Carrington’s. Hibdon was an early practitioner of what is now known as the Ned rig. Along with Hibdon, Kehde met the late Chuck Woods of Kansas City, Mo., and the late Ray Frincke of Overland Park, Kan. Both of which, Kehde refers to as the founding fathers of this finesse rig.

Kehde is now 74 years old, and continues to fish multiple times per week, while providing an online blog and email list of his reports and findings on the water.

Although you may not catch the biggest bass of your life on the Ned rig, you can catch huge numbers of fish of all species on it. It can benefit any angler, from the beginner to the most advanced tournament fisherman, so next time you are on the water, don’t hesitate to downsize and throw these “ultra-finesse” Ned rigs. 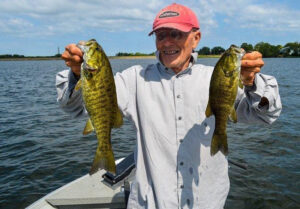