The LIVETARGET BaitBall Series caught a lot of anglers’ attention in 2013 when they debuted at ICAST. An interesting design element of smaller baits inside of bigger baits. They extended that line in 2014 with the BaitBall Yearling Series. I got my hands on the LIVETARGET Yearling Baitball Series jerkbait recently and had some success with it.

Jerkbait fishing for bass becomes extremely productive when water temperatures drop below the 55 degree mark. The window of opportunity for doing a good review on jerkbaits is fairly small. I wanted to be sure I tested these jerkbaits at optimal times and when most anglers would fish with them.

Here are a few of my thoughts on the new LIVETARGET Yearling Baitball Series jerkbait after fishing with it a while:

Most jerkbaits exhibit a slightly different darting action, position or even sound that makes them unique from other jerkbaits. I find more than many other baits that one jerkbait can be one angler’s favorite while that same jerkbait is someone else’s least favorite. So it’s all about what you like in a jerkbait.

It’s a mover not a shaker

I found the LIVETARGET Yearling BaitBall jerkbait to be a moving jerkbait. By that I mean it moves and darts a lot on your jerks but it has more of a horizontal action moving forward a lot on each twitch. So I would classify this as a water covering jerkbait. If you like to fish a little faster with a jerkbait. Cover a wider swath of water, this might be the right jerkbait for you.

I like that because the allure of this jerkbait is its ultra-realistic design with multiple little minnows inside the fuselage of the jerkbait body. With such realism it’s meant to be fished in clearer waters. And when I fish those ultra clear waters, I like to fish a lot faster and move the bait more.

It has a very nice suspending orientation as you can see in the video. You could adjust your hooks and cause it to sink or float just a hair if you wanted depending on the conditions, but the two I tested fished very neutral buoyant out of the box.

It sits very horizontal in the water. It will duck and dart up on a multiple jerking cadence. So it covers a lot of water but it’s also able to sit real still on the pause. 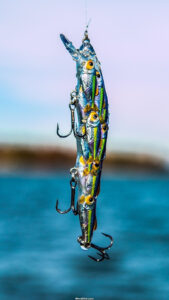 The LIVETARGET Yearling Baitball Jerkbait casts well. It doesn’t have a weight transfer system but it casted well enough without a lot of helicoptering on the casts. It comes in several colors, but I especially liked the Pearl Violet Shad color.

The appeal of this jerkbait is its unique pattern and flicker effect. Even when it’s being jerked and paused we think it could still appear as multiple baitfish to the bass. But the main thing we liked about it is that it moves a little different than some of our other jerkbaits and it has a unique appeal with its bait ball pattern.

The LIVETARGET Yearling Baitball Series is available at Tacklewarehouse.com and where LIVETARGET Baitball series lures are sold.

Have you thrown them yet? What do you think of them? 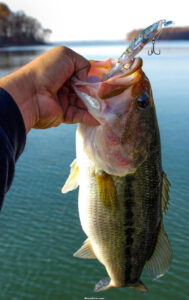 What are your thoughts on this bait?