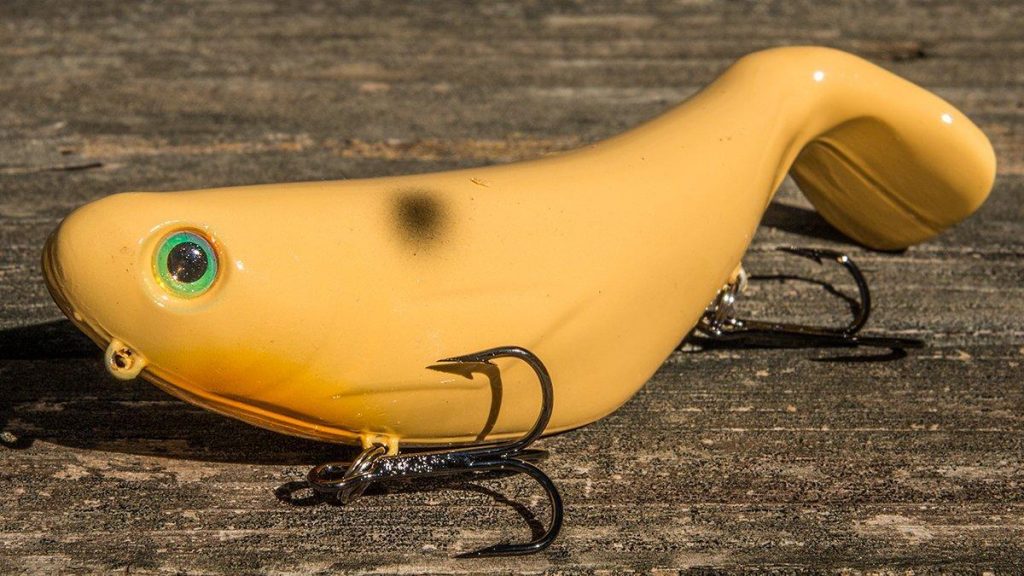 Alright, so here it is: The Bill Lewis StutterStep. I’ve been asked repeatedly about this new topwater lure since its release at ICAST. This funky-looking plug has the bass fishing community salivating, and after testing it for several months, I can safely say that the excess drooling is justified.

Below are my full thoughts on this new lure. Here is a quick look at the lure in action:

Measuring 5 inches and weighing a hefty 1 ounce, the Bill Lewis StutterStep may look more like a banana than a topwater bass fishing lure. It was originally made to target the aggressive tiger fish in Zimbabwe butâ€”wouldn’t you know itâ€”it also has a way of ticking off aggressive bass.

It comes in 11 colors that will cover the bases for anglers throughout the country. You’ll find acceptable patterns for dirty water, clear water and just about everything in between.

Throughout my testing, Ghost Bluegill has been the biggest producer.

The placement of its two treble hooks is especially advantageous for anglers. Each hook is located on the far end of the lure, which results in an impressive hookup ratio. As most topwater-savvy anglers are aware, short strikes are a common occurrence with this technique.

Because the StutterStep’s back treble is located so closely to the tail of the lure, anything that remotely sniffs at it will usually get hooked.

The biggest selling point for this lure is its versatility and unique walking action, so I spent a lot of time tinkering with different retrieves, line types and rod actions.

When you “walk the dog” with the StutterStep, it doesn’t move towards you like other topwater lures. Instead, it makes hard 90-degree cuts while staying in the strike zone for a remarkably long time. It also spits water a lot more than I expected, which is particularly appealing when fishing in breezy conditions.

I’ve found this retrieve to be effective when targeting isolated cover such as stumps, fallen trees and small, submerged clumps of vegetation. You’re able to keep the lure above the target for several twitches of the rod tip which draws strikes from otherwise lethargic bass.

You can also fish this lure like a traditional wake bait. Without moving your rod tip, simply reel the lure across the surface and it violently wobbles back and forth. I will say, however, that I was surprised by how quickly I had to reel in order to achieve this action. I was using a 7.1:1 gear ratio reel and a moderate-fast retrieve seemed to get the most appealing action from the lure.

Finally, you’re also able to cover an impressive amount of water with the StutterStep by incorporating downward twitches of your rod tip while steadily reeling. It’s not like many walk-the-dog topwaters out there; the body rolls much like a big, soft swimbait while the tail quickly kicks back and forth. This is a good way to target long points, humps and even schooling fish.

In regards to recommended gear, I’d suggest a heavy braided line, a fast reel and at least a 7-foot, medium-heavy casting rod. You could probably get away with a 30-pound braid, but this is a heavy lure and I prefer a bigger braid for a little more insurance.

I’d like to see a smaller StutterStep introduced in the coming years. Because it’s such a large lure, I don’t think it would work well for anglers who exclusively fish spinning gear; it’s simply too much to handle in my opinion. A smaller version would also appeal to anglers who target smaller bodies of water such as farm ponds.

But don’t be mistaken, though: The current size catches a ton of bass and they hit it with ridiculous aggression.

This is a really cool lure that topwater aficionados will love. It’s unlike anything I’ve ever tested and that deserves some major kudos; true lure innovation is becoming harder to find by the day.