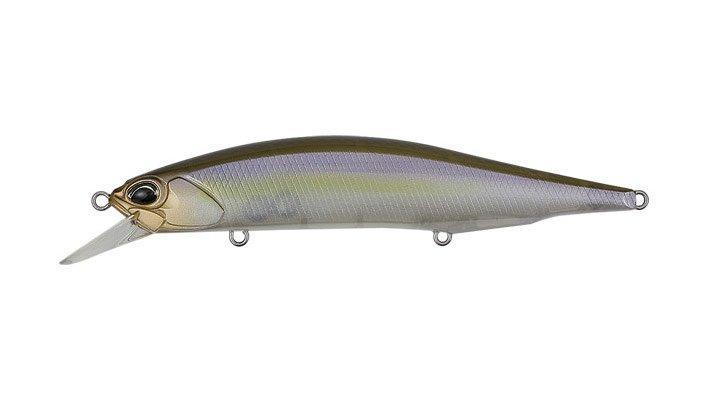 It’s been a jerkbait sort of fall and winter for me. I’ve caught fish on some other baits this winter, but a jerkbait has produce more of my better catches. One of those baits in particular is the newly released DUO Realis Jerkbait 110SP. In fact on my first cast on a recent outing, this jerkbait produce a 6 1/2 pound largemouth bass. So I figured I’d let people know a what I thought about the bait.

Here are some observations and aspects anglers will want to know about this new jerkbait from DUO:

The DUO Realis Jerkbait 110SP has a lot of technology built into it to produce a bait that can act a lot of different ways in the water. It’s balanced so that when you rip the bait with long fast rod pulls it produces maximum flash and kick then stalls at the end of your sweep and suspends.

Its flat sides with rounded top and bottom give the bait a great jerkbait action as well. It not only darts all the way around from one side to the other but it actually will dart up and down as well. So the bait becomes very erratic with hard jerks given slack to dart around.

With a slighter twitches, especially two quick twitches together the bait will get almost too erratic as it occasionally caught its front hook on the line. I found with the lighter twitches it was better to space them apart than to do two quick ones together. Give the bait ability to dart and glide and not go to sharp against its own axis. On a two hard jerks I didn’t have a problem. But two small subtle twitches together did on occasion catch the line. But I like a jerkbait that can dance in its spot.

A good jerkbait in my opinion doesn’t have as much forward movement. I can give it forward movement with the ripping technique. But when I want it to dart and stall on short fast jerks with slack present, I want the jerkbait to go side to side a lot more than forward. In cold water, I feel like the bass are sitting there watching it but not necessarily tracking it like they will do in warmer water. They are easing up to the space the jerkbait is working slowly. If the jerkbait moves 10 feet they will lose interest before they commit.

This bait is a rocket in the jerkbait market. You can rear back and heave this thing a mile. But the weight transfer in it is so good you can also roll cast it to targets like rip rap rock without introducing your expensive jerkbait the hard way to obvious destruction.

The weight transfer system is very good in this bait. It has a deeper seat so when the weights transfer to the tail they stay there until you literally dislodge them by pulling the bait forward. When you do that, the tungsten weights reverse to the nose and orient the bait with a nose-down position. And no matter how hard you jerk the bait, the weights will not dislodge from that forward position until you pull the bait out of the water and you will here them “click” back into the tail.

The thing to remember is you have to pull the bait to put those weights in the nose before you start jerking it. Not doing this and you will have a bait sitting tail down in the water and when you jerk it, it will act funny, catch hooks on your line, etc. But I started each cast by pulling the bait with a long rod sweep to get it to depth and seat the weights.

I really like the Morning Dawn color. I’ve had three big fish fall for that already this winter. The American Shad, Pro Blue Ghost and of course Gill colors are awesome. I like a reflective jerkbait, a white or natural matte color and then a clear ghost type color when I fish jerkbaits. I feel like with those three types of color patterns you can cover a lot of jerkbait fishing bases.

DUO Realis offers 16 great colors. I really don’t feel like there is a bad color in the line. When I see 800 colors in a lineup, I’m just curious who throws some of the colors I see. I feel like these colors would pass on just about any fishery while offering you several options in that metallic reflective, matte natural and clear general shades I like to keep my jerkbaits limited to.

The DUO Realis Jerkbait 110SP is a 3 hook jerkbait that measures 4 inches long and weighs 1/2 ounce. It will dive to 5 feet and suspends fairly well. I did put a suspend dot on one as it was floating a bit and put a smaller hook on one that was sinking a little too fast. So you want to check them in the water as there might be slight variances depending on the water temperature you fish.

You can find more about the Jerkbait 110SP at Duo-inc.co.jp. You can purchase them at TackleWarehouse.com and retailers that carry DUO Realis lures.