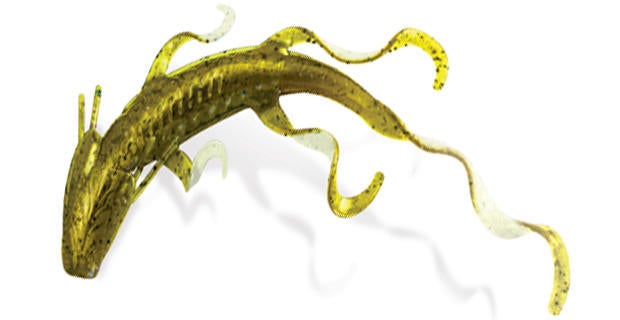 Culprit Lures is one of the original plastic companies, established in 1977, that brought soft pliable and laminated two color plastics to the market. Rodney Dann, an accomplished tournament angler, founded this company out of his garage in Florida.

Their original 7.5-inch ribbon tail is still a mainstay for savvy anglers across the country due to its subtle undulating action and laminated two-color characteristics.

Culprit has always been known for its vivid colors, tapered swimming action shapes and a myriad of actions that have given Culprit Lures staying power. They have a strong following with avid anglers everywhere.

Creatures, chunks, craws, spinnerbaits and buzzbaits round out their assortment of products.

For this giveaway we are going to give you a chance to win 12 packages of their new 7-inch Water Dragon Lizards. This lizard has a unique head and tail design and looks like it is on attack mode every time it’s in the water. Fish can’t stand it and want to crunch it. Anglers who have used it say it’s one of the most unique lizards they have ever thrown.

Congratulations to the winners, your baits are on the way! Thanks for entering and as always, keep an eye out for more weekly giveaways from the Wired2fish guys.