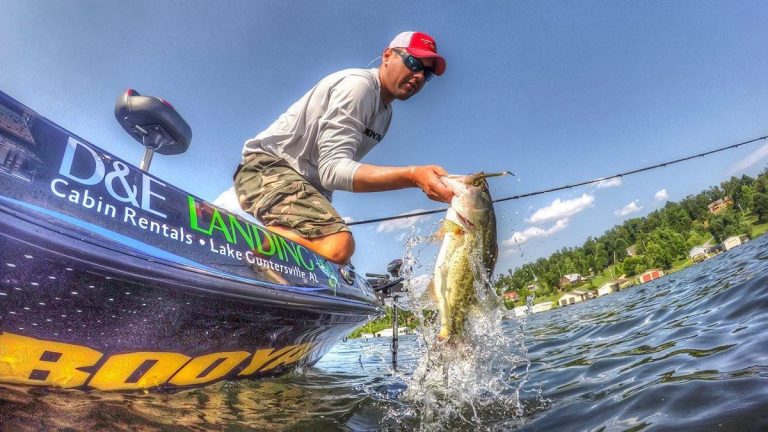 A tidal fishery known for its big bass, the St. Johns river shows its true colors in the spring months. When big Florida-strain largemouth take to the shallows, anglers have an excellent opportunity to enjoy some of the finest sight fishing in the country. The bass seem to group up in very small and relatively predictable areas, so wherever you catch one, you can expect to catch several more. If you’re not a fan of grass fishing, don’t worryâ€”you can also target the numerous boat docks found throughout this fishery and expect consistent action.

Many anglers consider Lake Havasu to be Arizona’s premier bass fishery. Known as one of the freshest and cleanest lakes in America, this lake has extremely clear water resulting in excellent spring sight fishing opportunities and summer topwater fishing. The lake levels are low right now, so the fish are compacted and easy to catch. Despite its reputation for finesse fishing, anglers can also find suitable power fishing opportunities in and around the lake’s shallow cover. Keep in mind, Elite Series pro Aaron Martens recently won on this lake pitching and flipping heavy cover with his now-infamous “blackbird pattern”.

With a 4 to 5-pounder considered a quality fish, giant bass aren’t easy to come by but there’s no shortage of 2 to 3-pound largemouth to keep you entertained. Additionally, several professional anglers consider Lake Havasu to be the most beautiful lake they’ve ever fished. 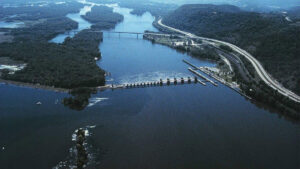 Lots of current, current breaks and matted shoreline vegetation make Pool 8 of the Mississippi River a junk fisherman’s dream. It’s absolutely chock-full of bass in the 2 to 4-pound range and it’s entirely possible to catch upwards of 100 bass per day on a topwater frog. What else could you ask for? It’s almost like a stocked farm pond, but better. 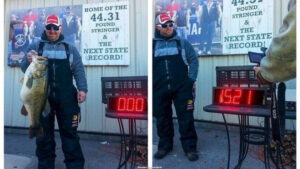 Chickamauga is quickly making a name for itself and for good reason. In addition to early spring 40-pound limits, this lake also produced a 15-pounder last year. What was once considered somewhat of a one-dimensional lake, it has shown its ability to produce huge limits and potential state-record largemouth. The combination of grass and Florida-strain bass have turned this lake into one of the top fisheries in the TVA chain.

While Castaic and Casitas have known histories of producing behemoth bass, Berryessa might be the best big bass fishery in the state currently. It often takes north of 30 pounds to win tournaments, and double-digit bass aren’t even surprising there anymore. It’s got a lot of high banks, deep water, cover and good visibility to draw those big ones out. 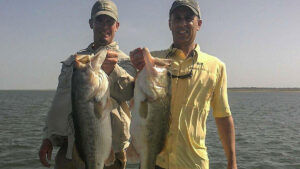 Lake Falcon is a famed big bass fishery that has been in a bit “slump” in recent years. Although it’s not what it was 10 years ago, it’s still regularly producing quality fish so we couldn’t leave it off of our list. You’ll find lots of flooded timber and flooded brush in addition to deep vegetation, trees and flooded roadbeds. Look for this lake to rebound and continue climbing our lists in the coming years. 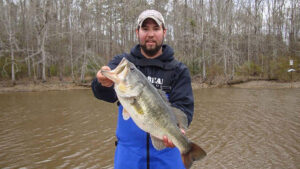 Another lake that has experienced some trying times in recent memory, Lake Eufaula is quickly returning to the days of old. With loads of shallow vegetation and hard cover, anglers can expect to catch both quality and quantity on a number of different baits and presentations. Brush piles are also a player on Eufaula and responsible for several major tournament wins. Regardless of your fishing style, you’ll likely find the fishing to be fairly straightforward and easy to pattern.

Known as “Toho” to most anglers, Lake Tohopekaliga and the Kissimmee Chain of Lakes routinely produce largemouth in the 8-pound rangeâ€”even in the heat of the summer. Lock systems connect four lakes, with Toho and Kissimmee being the largest and most popular among bass anglers. Much like Okeechobee, it’s full of shallow aquatic vegetation, shell beds and other sexy-looking largemouth habitat. If you like to flip and frog with heavy tackle, you owe yourself a visit to Toho. Your only issue will be figuring out where to start because it all looks so darn good. 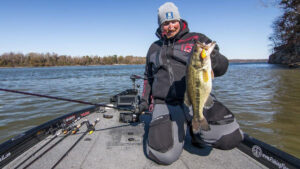 A very well-known offshore structure lake, Pickwick may not have as many offshore spots as Lake Guntersville or Kentucky Lake, but it has shown its potential to produce 15-pound largemouthâ€”a claim not many fisheries can make. You’ll find a big population of 2 to 4-pound bass with an occasional trophy-sized largemouth. It generally takes 20 pounds to win local and regional tournaments throughout the year, which is a true testament of Pickwick’s consistent bass fishing action. 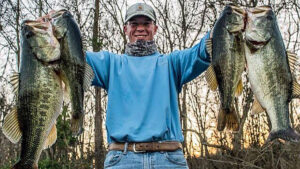 For whatever reason, this lake tends to fly under most anglers’ radars but don’t let that fool youâ€”5 to 7-pound bass are very common on Santee Cooper. It’s famous for its beautiful cypress trees and shallow stumps, but its clear water forces anglers to downsize their presentations to coax finicky largemouth. In addition to some stellar squarebill fishing, there are a lot of giant limits caught on finesse tactics such as floating worms and stick worms fished on 8-pound line.

Known primarily for its smallmouth bass fishing, Champlain is also a bona fide factory for quality largemouth. The south end of the lake is loaded with several different types of aquatic vegetation, making it perfect for some close-quarters frogging and flipping. There are plenty of 3 to 5-pound largemouth to be caught on Champlain, with the best action being found in the famous Ticonderoga area. 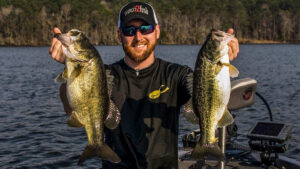 Not only does Lake Seminole offer the solitude and beautiful scenery outdoorsmen routinely seek, but it also boasts some of the best bass fishing in the country. Whether you’re probing its remote backwater ponds for spawners, ripping a lipless crankbait from its abundant vegetation or even deep cranking its patches of standing timber, your next catch always has the potential to be an enormous largemouth. Regardless of your preferred fishing technique, you’ll have a great time catching lots of 3 to 5-pound bass. 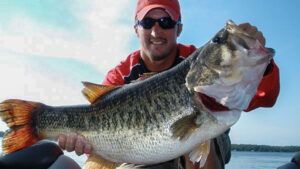 Lake Fork is arguably the most famous lake in Texas due to the consistently with which it produces produced giant bass. It kicks out both quantity and quality due to the lake’s intense management program. It’s a consistent producer for the Share Lunker program and based on reports from local anglers, this gem has no signs of slowing down.

Simply stated, there’s no other place like it in the world. Lake Okeechobee is an expansive, shallow fishery full of both aquatic vegetation and big bass. These trophy largemouth have no shortage of forage, either, with protein-packed wild shiners found throughout the entire lake. This is one of the most famous places for flipping and punching matted grass and it’s certainly a “bucket list” lake that every diehard bass angler dreams of fishing.

With one of the largest populations of bass in the country, Kentucky Lake is probably the most famous ledge fishing lake in America. The introduction of Florida-strain largemouth on the Tennessee end of the lake has produced giant tournament weights in recent years and added a whole new dimension to this popular fishing destination. Despite heavy fishing pressure, it still continues to produce big weights. 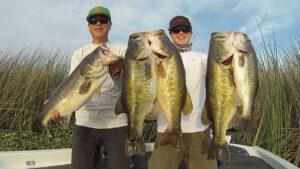 Perhaps the most unique bass fishery in the country, the California Delta is a maze of interconnected lakes and canals that are renowned for holding trophy-sized bass. It has some of the best frog fishing in all of California and we’re even tempted to call if the Frog Fishing Capital of America. 10-pounders are quite common, with Elite Series pro Justin Lucas catching a 13-pound bass in his co-angler days several years ago. If you like having water to yourself, the Delta is the place for youâ€”a tournament angler can fish for an entire day without seeing another boat. 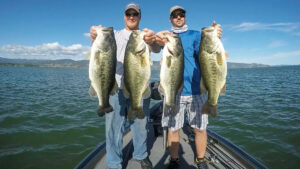 Due to its name, many anglers assume this is a clearwater fishery but it’s actually has an interesting greenish hue because of its high fertility levels. Clear Lake is where swimbait fishing became nationally known, so as you could probably guess, it gets a lot of fishing pressure. Regardless of the crowds, it still takes tremendous weights to win fishing tournaments throughout the entire year. You can fish offshore rock piles, grass beds, docksâ€”there’s no limit to the patterns on this lake. This is one of those special lakes that has a real possibility of producing a once-in-a-lifetime bass. 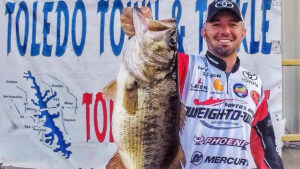 Another excellent Texas lake, Toledo Bend gets absolutely pounded by fishing pressure but there’s a good reason for itâ€”it’s the land of the giants. A unique blend of grass and offshore structure continuously produces huge largemouth and 10-pounders are actually quite common throughout the entire year. In the spring months, you’ll start seeing the elusive “teener” bass show themselves in the shallows. These factors make Toledo Bend one of the most popular fishing destinations in both Texas and Louisiana. 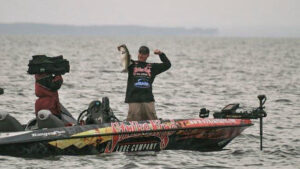 A lot of professional anglers believe this will be the best lake in America next year. Even in the hot summer months, it continues to produce both quantity and quality for anglers. It takes huge weights to win tournaments on this lake and 10-pounders are caught with amazing regularity. Sam Rayburn offers both shallow and deep bass fishing opportunities and it’s loaded with big Florida-strain largemouth.

It’s been a famous fishery for quite some time, but several years ago it fell out of recognition. In the last couple of years, however, it has turned into a world-renowned fishery that’s well-worthy of its praise.

The amount of year-round fishing pressure “The Big G” gets is almost unfathomable but it continues to kicks out big bass after big bass. That’s why we had to name Lake Guntersville the 2015 Best Largemouth Lake in America. Whether you’re fishing from a boat or from the bank, this lake should be at the top of your list this year. Take some vacation days, call in sick to workâ€”it doesn’t matter. Just make sure you take a trip to Lake Guntersville.

It doesn’t matter what time of year it is; if a tournament angler doesn’t bring a 25-pound limit to the scales, they’ll have a hard time being competitive on this lake. While a lot of fisheries throughout the country have great reputations in certain seasons, Guntersville produces 12 months per year.

In addition to excellent shallow grass fishing and deep structure fishing, it also has more bridges than almost anywhere in the country. These bridges create several funnel pointsâ€”or high-concentration areasâ€”which have turned into some of the most productive fishing spots on the entire lake. Elite Series pro Randy Howell actually won the 2014 Bassmaster Classic utilizing this pattern.