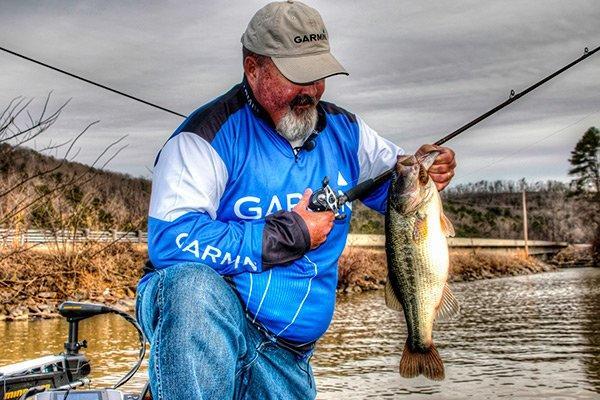 The water is still cold. With all the precipitation, it’s turned muddy. Bass fishing in muddy water is not the top of the list for many anglers. However anglers like us and many pros get excited when the water gets muddy under certain conditions in the late winter and early spring. Want to know why?

Because the bass will flock to it. Don’t believe us? You might want to go back and check out our coverage of the Bassmaster Classic on Lake Guntersville. Sure Randy Howell won in convincing fashion, catching bass from relatively shallow, muddy water on cold winter days. But a lot of pros caught big stringers fishing shallow muddy water.

We spent the day fishing with FLW Tour pro and former Bassmaster Classic champion Dion Hibdon fishing muddy water on Lake Guntersville shortly after the classic, and he expounded on why muddy water can be something you look forward to in the winter.

Success in fishing muddy water in the late winter early spring revolves around several key factors including the following:

Muddy water basically happens in a fishery because precipitation runs off the banks and carries sediment into the lakes and rivers. The new sediment and rising water stirs up the sediment in the lake and causes murkier situations. This will cause many anglers to run away from good fishing areas because they feel fish can’t see their lures anymore.

“If you can see your lure 6 inches under the water, that’s not really that dirty to a fish,” Hibdon said.

But conversely that doesn’t mean that mud is always the best place to look for bass. 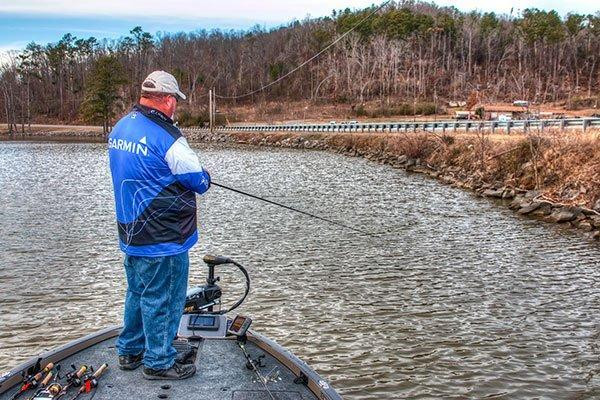 Hibdon advises making many small precise casts in an area until you find small groups of bigger bass warming and feeding in the mud along shallow, rocky banks.

Not all mud is good mud

The first thing Hibdon looks for when muddy waters enter the fishery is the timing of the precipitation that caused the runoff. The first thing he wants to know was what was the temperature outside when the rain, or as the case may be snow, occurred.

“A cold mud washing into the lake is not good,” Hibdon said. But if it’s been 60 degrees and raining steady for a couple of days and the rest of the lake is in the 40s, you better get to the bank because the fish are going there.”

The most valuable tool on his Garmin electronics when this weather event is happening in late winter and early spring is the temperature gauge.

“If I run in a creek and it’s 2 degrees colder, I’m not going to give it much of a shot. But if I pull in there and it’s 2 or 3 degrees warmer, I’m finding the first rocky bank I can and starting my search.”

Why are they there

Probably the easiest answer to why the bass run to the shallows is warmer muddy water along a rocky bank will be the warmest water in the whole area. The water being dirty will give them better ability to forage shallow without being so spooky. If it’s sunny outside, it’s going to be even better because the rocks will absorb that heat and further warm the water where the runoff has already heated things up for the bass.

“If someone cuts the lights off in your house at night, the first thing you are going to do is get to a hard wall and feel your way around. When rain dumps a bunch of mud into an otherwise clear fishery, the bass do the same thing and get right up against the bank or some form of hard cover and feel their way around. The other thing is when the warm water draws them to the bank like that, the bass are hungry and looking to eat. They’ve been sitting out in that cold water all winter and that warm water has them ready to eat.

There isn’t always a rhyme or reason to why the bass get in certain little areas along a rocky banks when new mud enters the system, but experience has shown that while you might have hundreds of yards of warmer muddy rocky shoreline, the bass will group up in little small areas.

“They have been grouped up all winter,” Hibdon said. “Now they went to the banks looking to feed in that dirtier water, and they seem to break up into small groups in get in small stretches.”

My guess is because bait or crawfish or whatever they are feeding on are concentrated in small spots along those rocky banks.

Hibdon almost always starts looking for the right areas in creeks and bays off the main lake rather than the main lake itself. He has found through decades of fishing with his father Guido Hibdon, also an FLW Tour pro, that the main lake areas just don’t see that noticeable temperature change like you find further back in the creeks.

A rip rap bank can be dynamite in the back of a creek like you find all over manmade reservoirs across the country. The rock absorbs warmth from the sun. The banks are full of crawfish and often attract shad when the water muddies and warms. Making them great places to start searching for bass when it gets muddy.

Clear water bass like mud more than you think

Many anglers think that bass that feed in a normally clear fishery are somehow incapable of feeding when the water gets dirty. When in fact it may actually make ambushing prey easier for them. While new mud in a normally dingy fishery can still be good and these same instances still apply, a clear water highland impoundment that all of the sudden gets some warm rain muddying the shallows can be lights out for anglers.

“I caught them one time on Table Rock to win a Central Pro Am tournament after a hard rain muddied the shallows on the lower end of the lake. It’s the only time I remember the lower end being muddy. I ran down there and had more than 52 pounds for 2 days of fishing just fishing hard rocky banks and flipping any hard cover I could find. Those fish were dumb. You dropped it on there head and it was on.”

Those fish on the lower end of a clear lake like that otherwise never go to the bank. So when they move up in that dirtier shallower water like that it  can be the easiest opportunity to catch them of the whole year.

I actually fished as a co-angler in the Bassmaster Tour event Mark Davis won on Table Rock in 2004, and this exact phenomenon happened. I drew Rick Clunn the second day. He had one bass for 2 pounds the first day. The second day he weighed 16 pounds including one nearly 7 pounds by scrapping his practice and picking up a spinnerbait and crankbait and fishing shallow in the new mud on a lake that normally has 10-20 feet of visibility because it had rained the night before and most of the morning the first day of the tournament and it was a warm rain. That’s also why Davis was able to catch his winning weight in just a few feet of waterin late winter. 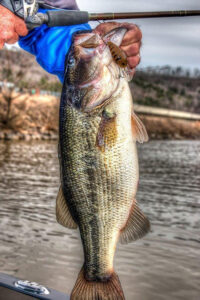 Hibdon reaches first for a shallow crankbait. He wants something he can bang around on the rocks that could mimic a crawfish or a shad at the same time. He concerns himself with covering water to find those small locations in bigger areas that hold concentrations of big feeding bass.

“I will either throw something red or brown to mimic a crawfish or something white or chartreuse to mimic a shad,” Hibdon said. “I will crank it slow and steady giving them time to find and hone in on the bait in the dirtier water.”

He also likes a spinnerbait and sometimes a jerkbait if the water is not as muddy in those areas but still dirty enough to move the bass up to the bank. And usually if he finds fish on the crankbait going through the area the first time, he’ll turn back around and fish it with a jig, picking off those bass that might not have chased the other baits.

Tips to be more effective on muddy lakes

While I fished the rip rap areas with Hibdon, I noticed he only made small short casts and didn’t move his boat much during the cast before inching up and making another cast.

“Dad won Eufaula with something like 80 pounds and it was a similar deal with new warmer mud coming into the lake,” Dion said. “He knew the best concentration of bass were in about a 20 yard stretch. So he would visit the stretch several times each day and he would cast his bait about 6 inches ahead each cast making sure to cover every inch of the most productive area.”

Hibdon has learned that small precise casts at short angles are more conducive than long bombing parallel casts and moving the boat along on high with your trolling motor.

“It’s warmer, but it’s not warm yet. These fish are just coming out of their winter funk. Sometimes you have to force feed them a bit. So I try to just ease along paying attention to my casts and cover the water to give them several chances to bite.”