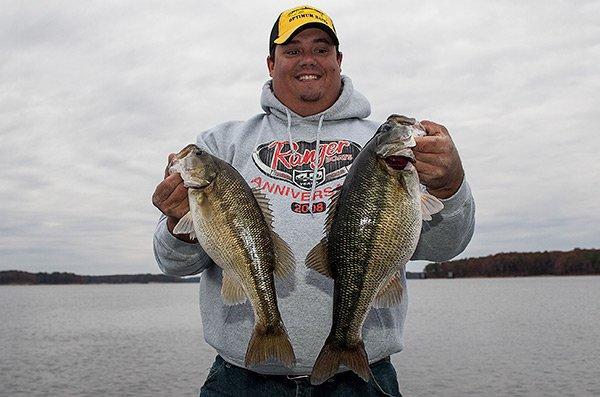 Some would say they know when to bass fish. And their answer would be any time. I tend to agree. But when to bass fish is more about when to do what. Certain lures and techniques were created and subsequently shown to be more effective at certain times of the day, season or year.

We can’t possibly identify the best tricks for every time of the year because quite frankly it varies. While it’s spawn in Florida and Texas, it’s still winter ice fishing in Minnesota and New York. But what we can do is look at some factors that dictate when the bass will be acting a certain way based on decades of experience and research on lakes all across the country. Then we can look at tools like the Fishing Lure Selector Guide as a reference on what lures to throw when.

Knowing when to bass fish essentially boils down to these 7 things you should consider:

While we mark four seasons on our calendar in everyday life, in bass fishing we actually break the seasons up further. My experience has shown that bass don’t act the same in early winter as they do in late winter, largely due to baitfish activity.

I break the bass fishing seasons into late winter, prespawn, spawn, post spawn, summer, fall, and early winter. Other anglers may break them up further like late summer and early fall. The point is bass are changing their habits usually by what are predictive seasons around bass fishing

A bass is feeding up after a long winter in the prespawn, then they are guarding nests during the spawn. Later they guard their hatched fry during the post spawn. They group back up with their buddies in large schools in early summer and will stay that way until they start breaking up into smaller wolf packs in the late summer.  Bass group back up to school and chase forage in the creek arms in the fall before finally matriculating back out deep to spend their winter until the following prespawn.

Technique wise, there are a plethora of techniques associated with winter, spring, summer and fall. Frog fishing can be great in the spring, but their happens to be more matted vegetation in the fall on most fisheries, so it’s an even more invaluable tool then. Likewise a jerkbait will catch bass in the middle of summer, but it becomes invaluable when you’re able to twitch it and pause it for 10 seconds at a time in water temperatures below 40 degrees.

Moving baits dominate more as the water warms up in the late winter and early spring and again at the end of the summer when the water starts cooling off. The baitfish in late winter and spring will move out of deep water and move into shallow areas. The bass begin gorging on the bait to fatten up for the spawn that is coming and to catch up from a long winter of being dormant.

Likewise in the fall, baitfish migrate out of the deep water they retreated to with increased water temperatures to shallower areas. The bass likewise follow them again foraging day and night fattening up for what could be a long winter.

We created this Bass Fishing Lure Selector based on water temperatures and affective lures and techniques for each.

Spawning rules for when to fish

Essentially the spring for a bass is made up of prespawn, spawn and post spawn. A bass will fatten up for the spawn during the prespawn. They go on the feed and will fall for a lot of larger profile lures like crankbaits, spinnerbaits, swimbaits and jigs during this prespawn feeding.

Then as the spawn hits, the bass will be seeking gravel, sandy bottoms and begin pairing with other bass to produce and fertilize eggs. During this time both the female and male become very territorial, either roaming near beds or locked on a specific bed after the eggs have been laid. They are very susceptible to being agitated and provoked into striking lures by repetitive intrusions in their territory. Jigs, plastics and sometimes suspending baits or even topwaters can provoke a guarding bass into clearing the area and your lure.

After the eggs have hatched, the male will generally stick around to guard the fry until they reach a mature enough size to high in and around shallow cover. Again the fish can be easy to find but not always easy to coax into biting. They definitely get more serious when it appears a lure is threatening their fry. So baits like spinnerbaits, topwaters, swimbaits, and soft and hard jerkbaits can really push a bass’s button during this phase.

One other spawn of note is the shad spawn. Many reservoirs have shad and those shad spawn every full moon during that 65-75 degree water temperature cycle. Bass get very keyed and in tune with the shad spawn and this can be a very productive way to target bass in small windows. The shad will spawn and roll and be otherwise preoccupied in lowlight conditions around hard objects like boat docks, boat ramps, bridges, laydowns, rip rap and other hard targets. Early in the morning if you can find a shad spawn, you can find some of the easiest bass fishing of the year with shallow crankbaits and spinnerbaits and my favorite a bladed swim jig.

Weather influences when to fish

One of my absolute favorite “windows” of bass fishing is in the late winter, early prespawn period where you have a 3-day warming trend. I’m talking when it goes from being in the 40s and 50s to being in the 60s-70s. If it gets to be 70 degrees and rains, that’s my key to go hunt for some bass shallow, especially near some runoff creeks or ditches. I’ve caught some huge strings targeting that 3-day window like that.

Another weather phenomenon is rising water. Runoff and spring rains can lead to a flooding of shoreline cover and can make for some of the best bass fishing of the year. I arm myself with a spinnerbait, frog, and a few flipping sticks and have a ball catching bass from flooded cover in the prespawn, spawn and post spawn periods.

I’m constantly watching for cold fronts as well in the spring. I don’t worry with them as much in the summer and fall, but a cold front coming when the water is already cold can definitely change fishing for the worse. You have to be prepared to slow down, fish likely targets repeatedly and methodically. It’s not as much about searching as it is hunkering down in good looking areas.

Fishing pressure affects when to fish

I’ve seen where bass fishing at night gets a lot better because bass aren’t as pressured shallow at night like they are during the day. In the hot summer, it seems like fishing gets a lot easier at night. The fish seem to let down their guard a little more.

The Solunar tables for fishing track the influences of the moon phases on fish. They have proven to be a good guide for anglers for many decades of bass fishing. I know some big bass experts who plan their best trips for the full moons in and around the spawn.

In the spring, full moon periods signal the spawning time for bass but also for their forage like shad and crawfish. So there can be a lot going on in the ecosystem to really improve your odds for bass fishing then.

Later in the summer,  full moon nights can be some of the best times to wind a single Colorado bladed spinnerbait around for big bass on the prowl under bright moonlit skies. The moon definitely affects the bass and their prey and planning around it can often yield your best results.

From the spring to early fall, a lot of my fishing is based on availability. I go when I can. But if I had my qualms, would specifically pick the periods around those low light hours or conditions to do most of my bass fishing. The time when I like to bass fish the most is that early morning sunrise, during an overcast day, or that last hour before dark.

Call me old-fashioned or nostalgic, but I’m convinced a bass is a much more efficient predator when the sun is not lighting up his underwater world. The advantages tip back in his favor and he’s able to target and pounce on unsuspecting bait when he’s more easily concealed in those low light hours.

I think that’s why the bass get so active in those periods. They know they have an advantage and the capitalize on it. I love a topwater in low light conditions in the spring and fall. I love a spinnerbait on overcast and windy days. I like a bit of sunshine and clouds when I’m fishing a jerkbait or a crankbait a little deeper. So I will try to pick when I can fish based on those low light intervals.