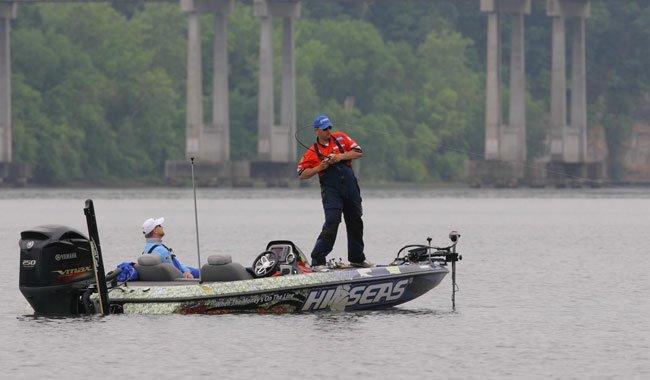 The spawn and post spawn stages of bass fishing are already happening in the southern tier of the country while the prespawn bite is just ramping up in the middle of the country. And the northern portions are just thawing getting ready to hit the prespawn. So there is still a lot of prespawn fishing to be had over the next month or two. With crazy changing we wanted to delve into patterning fish in the prespawn.

Cliff Pace, who is preparing his tackle for the Pickwick Lake Bassmaster Elite Series tournament he’ll soon start practicing for in roughly a week, has had a lot of success with prespawn bass over the years and shared some insight on how to effectively target bass this time of year.

“To me, prespawn is one of the few times of the year that bass are the most patternable,” Pace said. You take any lake or a section of a big lake where fish have been offshore and follow a path to where they want to go to spawn and then figure out how far along they are on that path. It always seems like the majority of the fish are all doing the same thing really early in the prespawn. Whereas in post spawn some fish are out already, some are on their way out, some are on the banks roaming and some might still be spawning late.”

To really pattern fish effectively you have to divide the lake into sections then you choose a section that covers most of the options in a fishery and you subdivide that section into smaller pieces. Then you fish the whole section and figure out what subsection they are using and then pattern that all over the lake. Patterning fish is not as much about patterning what bait to throw, but patterning what area of each creek the fish are using.

Pace starts out by choosing an area he can fish in one or two days of practice. He’ll fish it front to back and then figure out where his most consistent bites came from and then pull out his map to figure out where else on the lake matches that type area. For example he might find the bass are on the first channel swing bank of a creek arm. Then he’ll look at all the other creek channel swings in the mouths of other creeks and see if he can quickly establish the pattern in other areas.

“Prespawn fishing means identifying what the bass are using,” Pace said. “Are the fish on the first channel swing going into a creek or the last one before it flattens out in the back of a creek. If the lake really doesn’t have creeks like that, maybe it’s docks on the first point or pocket in a bay or arm of the lake. It’s figuring out the kind of areas the fish are staging on and then choosing the best tool to fish that area.

Pace keeps his prespawn fishing pretty simple. He starts when the water is below 55 degrees with reaction baits. The bass are starting to think about feeding but they aren’t up on the banks roaming for food. They are sitting grouped up usually and sometimes suspending feeding occasionally on easy forage.

His first choice is a Jackall Squad Minnow. Other good choices we recommend would be Spro McSticks, Megabass Ito Vision 110s, Lucky Craft Pointers and Smithwick Rogues. When the water is cool a jerkbait that sits in a bass’s face taunting them can be the ticket. He’ll work the bait subtly focusing on the pauses. Deeper jerkbaits like Spro McRips, Rapala X Rap Deep, Lucky Craft Staysee and Jackall Squirrel DD 79SP can all be productive if the fish are staging a little deeper or suspending it deeper cover like tree tops.

If the fish are little more willing to move around and chase a little bit in colder water, Pace will opt for a tight wiggling crankbait. His first choice here is a Jackall Soul Shad 68SP. It’s narrow profile and finesse build give it a tight wiggle. We also like CP Baits and Rapala Shad Raps for coldwater finesse approaches to crankbait bass. Again slow retrieves and covering the right water is paramount.

As the water warms and the fish get more aggressive he selects wider-wobbling, round-bodied baits like Jackall MC60 SRs. When the water is warming just before they spawn is also when the square bill can take over. See our coverage of many of the top square bills in our Square Bill Wars Part One and Part Two.

If the fish stop relating to reaction baits, he’ll slow down more and fish a V&M Shaky head and a V&M Finesse Jig and fish more thoroughly in an area where he thinks the bass ought to be. He tips his V&M Shaky head with a green pumpkin V&M Finesse Worm and his jig he likes to trailer with a V&M Mudbug or a V&M Twintail.

Bait selection, however, is where Pace cautions anglers.

“Too many anglers want to pattern the fish on a certain lure, and after they figure out they are on a specific type of area like the last channel swing in every creek, they will just fish one lure that worked on another area,” he said. “It’s more important to figure out the areas they are using and then choose the best tool to fish each one.

“You might go to the first one, and it’s lined with docks. So you flip a jig on each dock post. Then you go to the next one and, there are no docks. There is, however, big chunk rock that works well with a crankbait. Or there is grass on one and not the other. Figure out where the fish are and how far they are in the creeks, and then pick the best bait or two for each creek based on the cover or situation in each one.”

In the prespawn period, hard bottoms seem to be the key. Rocky banks, rip rap, big chunk rock, and even gravel bottoms with some hard structure like dock posts or stumps can be better than the softer bottoms.

Hydrilla can be really good and it presents new bait options like ripping lipless crankbaits out of the grass. But the type of area is always more important than the cover on it for colder water prespawn times. Rocks retain heat and can be a few degrees warmer than soft banks. Also rock transitions from boulders to chunk to gravel can also congregate prespawn bass in the right areas.

“It sounds crazy to say this but I actually think you can fish faster and establish patterns faster when the water is colder,” Pace said. “They tend to group up more. The fish seem to be doing the same thing all over the lake when the water is cooler. As the water warms and gets closer to the spawn, the fish keep migrating and as they do they spread out and start roaming and looking for places to nest. Whereas in the colder water they group up and hold and replenish day to day waiting for Mother Nature to give them the opportunity to move up shallow.” 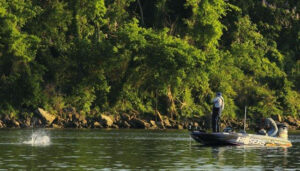