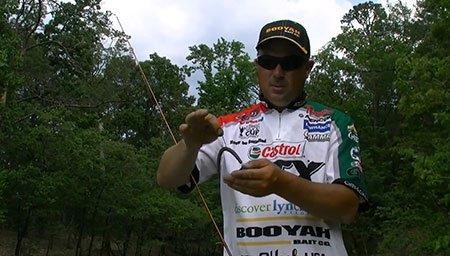 Hey everybody this is Dave Dudley. I want to teach you a little bit about a Wacky Rig. Wacky Worm Rig, it’s really wacky. If you want to ask me, get Point Blank to it, it’s kind of wacky. I don’t know who invented it or how they came up with it; somebody had to of jerked and the worm come half way off while they were reeling it back in, somebody said, “Oh look at that, maybe we can catch a fish!” and one bit it, I don’t know, but this rigging is just simple as it can get.  My choice of bait is of course going to be a Yum Dinger. It’s a straight tail it’s just straight as you can get, complicated, watch- hook directly in middle. That’s wacky. I know I’m joking about it and I know I’m making a lot of fun about it but this technique has absolutely elevated my game to a whole other level. I don’t care if you’re a beginner, experienced, or what style of fisherman you are; this Wacky Rig is a power house. Do not overlook this. Now, when you’re throwing it, it’s pretty simple. You’re going to want to throw it out. I’m going to use it on a weightless hook normally a 2 ought straight shank hook is my choice. But you’re just going to throw it out and as soon as it hits the water you’re going to let it sink just a little bit. I like to get it moving right off the gitty. Some people like to throw it out and it just sinks-sinks-sinks. Right off the gitty, we’re already fishing shallow for the most part. As soon as it hits the water, I’m just going to give it a little bit of slack. All you want to do is bounce your slack. What I mean by that; you have slack in your line and all I want you to do is bounce your slack. Don’t pull it, but bounce your slack like this and when you bounce your slack, the second your line gets tight, give it slack, tight, give it slack, (tight), give it slack and what that does is that creates the term where the Wacky Worm is going. Come. Get. Me. That’s technically what it’s saying in the water it’s like:   I Dare. You. To. Come. Get. Me.   So, basically all you want to do is make that Wacky Worm just flutter just a little bit; just like this coming through the water. Don’t make it complicated. It is a Wacky Rig. It is wacked out. I don’t know who invented it but it doesn’t matter. It has elevated my game to a new level and it will elevate your game to a new level. Get you some Yum Dingers, 2 ought Straight Shack Hook, and you’ll be successful like I am. I’m Dave Dudley, stay tuned to  wired2fish.com